Striving for Security and Peace for Israel and the Middle East 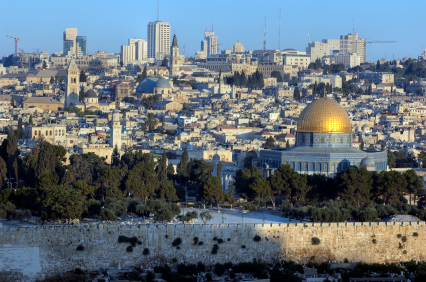 Today, 11 years since Prime Minister Rabin and Chairman Arafat shook hands on the White House lawn, we continue to watch in horror and sadness as Palestinian terrorism haunts our brothers and sisters in Israel.

Palestinian terrorism has taken over 1,000 innocent Israeli lives, tearing apart families and communities. Yet Israeli society remains strong and vibrant and has not allowed the enemies of the Jewish state to sap its strength weaken its resolve or destroy its spirit. Although terrorism has threatened every element of Israel's culture and societies, making it dangerous to ride on a bus, sit in a café, or even walk down the street, we salute the relentless courage of Israel's citizens and commend them for their resolve in continuing to go about their daily lives in the face of unwavering violence. We pledge to continue our commitment to traveling to Israel, and encouraging others to do so, displaying our solidarity with our sisters and brothers in Israel through our presence. We reaffirm our position from prior resolutions1, that the greatest impediment to peace is terrorism. The Palestinian Authority, and in particular President Yassir Arafat, have failed to dismantle the terrorist infrastructure in Gaza and the West Bank. We unqualifiedly condemn such terrorism and call on them again to go beyond mere words and to take active steps toward eliminating terror. We also recommit ourselves to counter aggressively the hatred and falsehoods against Israel that so frequently appear in the Arab and international media.

At the same time, we cannot ignore the suffering of the Palestinians. Innocent civilians have been killed regularly as Israel retaliates against terrorist targets purposefully situated in civilian population centers. These retaliations have escalated recently as Israel tries to weaken the terrorist structure in Gaza in preparation for withdrawal. Life under military control in the West Bank often has been harsh, and many problems have been exacerbated as the new security barrier winds through the West Bank sometimes separating Palestinians from lands, communities, and family. Other frustrations have mounted in communities that have seen a significant proportion of home demolitions which are undertaken for administrative (rather than security) reasons. We reaffirm that the government of Israel has every right to defend and protect her citizens in her ongoing fight against terror, but we respectfully encourage the use of tactics that respect the human rights of Palestinians. As IDF Chief of Staff Moshe Ya'alon recently cautioned, many of Israel's military responses have exacerbated the situation, generating more enmity, anger, and violent responses than it has undermined terrorism.2

In response to relentless Palestinian terrorism and the stagnation of the peace process, Israeli Prime Minister Ariel Sharon has proposed a plan to “disengage” from the Palestinian population, beginning with unilateral military withdrawal and the removal of all Israeli settlements from the Gaza Strip as well as from parts of the West Bank. Supporters argue that unilateral withdrawal will free Israeli soldiers from securing hostile environments, thereby saving Israeli lives; will end the military occupation of the 1.3 million Palestinian residents of Gaza; will allow for redeployment of troops in positions that have the potential to reduce the amount of Palestinian terrorism committed against Israeli citizens; and will remove a major obstacle to a final peace agreement. Critics are concerned about rewarding terrorists by giving them what they want with nothing in return; about undercutting the incentives to get back to the peace table, if both sides feel they can get what they want by unilateral actions; and that if Israel does nothing to strengthen the Palestinian Authority's ability to control the area after the withdrawal, the terrorist groups will take control. These problems have been exacerbated by recent findings of networks of tunnels from Egypt-controlled Sinai into the Gaza Strip, serving as conduits for weapons for terrorists. Most moderates and doves, while recognizing the risks, have supported the Prime Minister's initiative as a vital step in removing a major obstacle to a two-state solution.

As we have stated several times in previous resolutions,3 demographic realities4 reveal that Israeli settlements in the territories complicate the feasibility of a two-state solution, the only solution that provides for a democratic Jewish state of Israel living in peace and security. Thus, we largely support Israeli Prime Minister Ariel Sharon's plan as a means of enhancing Israel's security and of laying the groundwork toward a future two-state solution. We are pleased that that the Israeli Cabinet has approved a revised withdrawal plan, and commend the Prime Minister for his strong leadership in securing that approval. Further, we take hope from polls that indicate substantial support among the greater Israeli population.5

We also know that in the process of unilateral withdrawal, the involvement of the United States and Canadian governments, as always, will be essential in garnering political support within Israel and from the international community. The United States and Canada must work closely with Israel in strengthening the ability of the Palestinian Authority to control Gaza, rather than leaving a power vacuum that will be filled by terrorist groups. These governments can expedite the process of withdrawal while continuing to push for direct negotiations with the Palestinians. Other particular American interests are at stake as well since the instability and anger caused by the Israeli-Palestinian conflict continues to undercut America's efforts in the war against terrorism and in finding an effective resolution to the situation in Iraq. We hope that the current election season will not prevent President Bush or Congress from taking real leadership in the peace process.

In a further attempt to reduce terrorism against Israeli civilians, the Israeli government has been constructing a security barrier between Israel and the Palestinian communities in the West Bank. Security barriers have been largely effective in diminishing terrorist capabilities in the cases of the Gaza Strip and the border with Lebanon, and diverse Israeli groups across the political spectrum maintain that the construction of a security barrier is the best path to short-term self-defense under the current conditions. We are heartened by the fact that the erection of the security fence and the efforts of Israel's defense intelligence and police forces have been followed by a considerable reduction in the number of homicide bombings that have been carried out in Israel in recent months.

If the security barrier reduces or eliminates terrorism in the short term, and is seen by Israeli and Palestinian leaders as creating conditions that will allow the parties to sit down again at the negotiating table without ongoing terrorism undermining the stability in the region, the barrier will be a long-term as well as a short-term success.

Two cautions need to be noted, however. First, if the barrier's temporary stopping of terrorism is used to argue that such unilateral action is all that is needed to secure Israel's well-being (and therefore no negotiations are necessary), the security barrier may well, in the long run, turn out to have undermined Israel's security and wellbeing. Since eventually the terrorists will find ways over or around even the most secure barrier, only a negotiated political resolution to the conflict will lead to lasting peace.

The second concern is that the original idea of a pure “security” barrier running generally along the Green Line has given way to a more “political” barrier that is seen by many as aimed at establishing future borders. Such a barrier, weaving through the West Bank, creates far greater negative impact on the lives of Palestinians whose lands and communities are divided by the barrier and generates more political opposition to the barrier, not just from Palestinians but from the international community as well. Here, too, the United States can play a constructive role. The willingness of the Israeli government, after discussions with U.S. officials, to move or remove sections of the barrier because of political and/or humanitarian concerns, is heartening. So too is Israel's willingness to continue to state formally that it does not view the establishment of the barrier as the establishment of a permanent border.6

Challenges and Dangers of the Occupation: Administrative Home Demolitions

Even as we express our general support for the Israeli governmental policies of unilateral withdrawal and the security barrier, we must note that the impact of Israeli's continuing occupation is becoming evident in many areas of Israeli life. Among the specific issues that reveal the challenge of occupation is growing concerns over the Israeli policy of discriminatory administrative home demolitions.

As distinguished from home demolitions performed for security reasons, which are not addressed by this resolution, administrative home demolitions the destruction of a home for a violation of zoning or building regulations constitute a disturbing human rights issue. For years such policies have been applied preferentially to Jews and discriminatorily against Arabs, particularly in the granting of zoning and building permits and the imposing of penalties against Arabs that far surpass the level of infraction and fail to recognize the great importance of having a home.7

This issue has been a major concern for a number of human rights groups in Israel, including Rabbis for Human Rights, an organization comprised of many Reform and Conservative (as well as some Orthodox) rabbis in Israel. In April 2003, Rabbis for Human Rights Director Rabbi Arik Ascherman non-violently protested this policy by blocking the path of several bulldozers when they came to demolish the home of the Maswadeh family in Beit Hanina, leaving Sufian and Sana Maswadeh, their children, Mr. Maswadeh's sick mother, as well as his brother's entire family, homeless. He also stood with the family of Ahmed Mousa Dari in Issawiyah, when the bulldozers came to demolish their home. For these actions, he is currently standing trial. In both of these cases, homes were demolished because of a violation of zoning regulations in the context where it is almost impossible for Palestinian families in those parts of the West Bank under Israeli civilian control or in Jerusalem to legally obtain building permits.

Since 1987, 2,500 Palestinian houses on the West Bank and in East Jerusalem have been demolished for administrative reasons, leaving more than 16,000 Palestinians homeless.8 The discriminatory administrative home demolition policy contradicts the kind of Israel envisioned by the founders of a Jewish state. This vision is articulated in the Declaration of Independence when it describes the state as one that "will be based on freedom, justice and peace as envisaged by the prophets of Israel."

THEREFORE , the Union for Reform Judaism resolves to:

5 A Dahaf/Yedioth Ahronoth survey conducted on May 13, 2004, found that 71% of the general Israeli public supported the initiative, and only 24% opposed.

Union for Reform Judaism Board of Trustees
END_OF_DOCUMENT_TOKEN_TO_BE_REPLACED