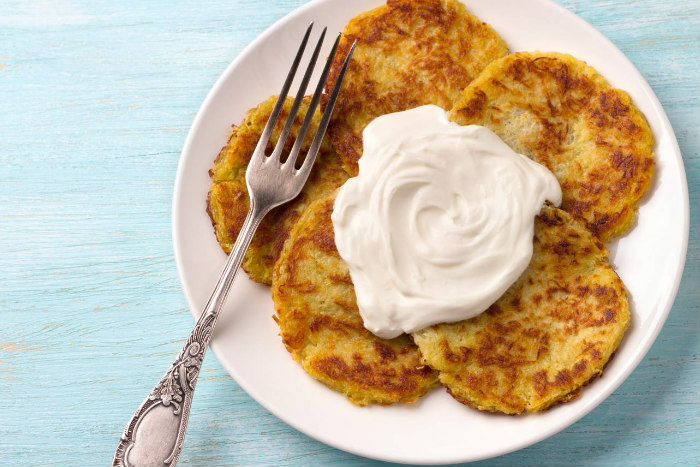 Starchy Russet potatoes (sometimes called Idaho or “baking potatoes”) are best for latkes because the starchiness helps hold them together for easy baking. Although you may be tempted by the pretty colors and thin skins of red or Yukon Gold potatoes, stick to traditional Russet potatoes for this recipe.

2. Add other vegetables and spices.

You can also add pops of color and flavor with herbs or spices. Fresh chives and green onion make the most sense for their onion flavorings. A dash of red can come from paprika or ground annatto powder; turmeric can add a pop of yellow. A dash of curry powder would add an interesting global twist, while a sprinkle of chili or Cajun seasoning would bring a spicy kick. Smoked paprika does well as a vegan fake-out for bacon-lovers. One teaspoon of spice works for every two potatoes.

3. Use the small holes on your grater to shred the potatoes.

The smaller shreds will release more starch, creating crispier latkes that hold together better. As soon as you have a little bit of shredded potato, cover it in cold water to prevent browning, which is caused by oxidation that occurs when the potato is exposed to air. One more tip: Grating the onion at the same time as the potatoes not only makes less work, but also creates latkes with more evenly-balanced flavor.

If grating is not an option, you can use pre-shredded potatoes. You can find them in the freezer section of the grocery store, usually with breakfast items. Double-check the ingredients, though, to be sure you’re not adding a lot of extra salt, fat (like oil or cheese), or other strange ingredients.

4. Squeeze out the moisture.

One of the biggest culprits for a soggy, dense latke is a soggy potato mixture. Draining in a colander won’t do. Instead, you must place the grated potatoes and onion in a clean kitchen towel and wring out all of the moisture. Roll up your sleeves, channel some of your holiday super-human strength, and get rid of that moisture!

Traditional latkes use eggs to hold them together, but chickpea flour or potato starch are easy, healthy go-to vegan substitutes. Either is fine, but I prefer chickpea flour because it adds a little more protein and I think it holds the latkes better.

6. Add a dash of baking powder.

When baking powder (sodium bicarbonate) interacts with water, it makes things “poof.” Bakers commonly use it when making muffins, breads, and pancakes. You can use it to put a little “poof” in your baked latkes.

7. Use a silicone baking mat or parchment paper.

For easy baking and no-stick latkes that are easy to flip, place a silicone baking mat or parchment paper on your baking sheet and skip the no-stick spray, which only adds calories.

8. Bake latkes in a super-hot oven.

For a crispy texture and golden color, bake your healthy, low-fat latkes at 425 degrees in a convection oven, which circulates the air, providing a dryer, more even heat and a crispier latke. One tablespoon of oil has 120 calories, so ditching the hot oil for cooking latkes means less mess, fewer calories, and less fat. Four baked latkes have fewer than 100 calories, plus healthy fiber, potassium, vitamin C, and protein.

Traditionally, latkes are served with sour cream or applesauce – or both. Opting for applesauce is an easy way to keep the recipe dairy-free and, personally, I enjoy how the sweetness of the applesauce balances the savory flavor of the latkes. Finally, it’s impressive and easy to make applesauce from scratch. You only need apples and time. Make a big batch and freeze it to enjoy all season. (Try classic applesauce or easy microwave applesauce.)

You also can make and bake these latkes ahead of time. Let the baked latkes cool then store them tightly-wrapped in the freezer for up to one month. To reheat, simply spread into a single layer on a baking sheet and bake them at 425 degrees for about 8-10 minutes, until warm and crispy. For extra-crispy latkes, place a baking rack on top of your baking sheet. Spread the latkes onto the rack and bake them at 425 degrees for 10 minutes. The rack will allow for more air circulation, giving you a crispier latke.

Adapted from 9 Tips for Making the Ultimate Baked Latkes. 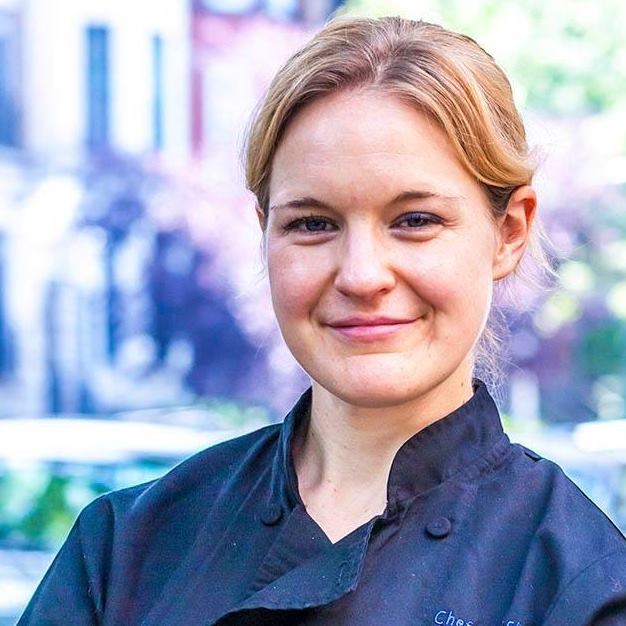 Katie Simmons is a personal chef in Chicago. Her journey to cooking has been a winding path from Kentucky to backpacking in New Zealand through culinary school at Kendall College and working for Whole Foods Market. Her frustration at being an overweight fitness professional finally led her to embrace a plant-based, vegan diet.