While I thought I had an awareness of my purpose, a new one was revealed to me this past summer when my two daughters, Alexis, 28, and Shaina, 25, and I visited Vienna, the city where my father/their grandfather, of blessed memory, was born and raised.

In advance of the trip, I asked Jewish Vienna Now for help in finding a bilingual guide to lead us on a tour of the places where my father had lived, and the cemetery where my grandfather and both sets of great grandparents were buried. They put me in touch with Barbara Timmerman of Vienna Walks tours, which specializes in Jewish tours.

Prior to our arrival, Barbara located all my dad’s addresses, from his birthplace to his last-known Vienna residence. Also, knowing that many graves in the older sections of the Central Cemetery of Vienna are in ill repair and can be a major disappointment to family visitors, she traveled out to the cemetery in advance to ascertain the status of the graves. Indeed, my great grandfather’s grave had been knocked over and completely covered by brush. Through the groundskeeper, she obtained a quote for its repair, which I authorized before our journey.

I had known for a long time that my paternal grandmother had died in Treblinka in 1942 and my father’s brother had perished in Ausch­witz that same year. But thanks to Barbara, I also learned how my paternal grandfather died—a question I’d pondered throughout adulthood. She discovered an article in an archived newspaper from 1912 and translated it for me. My grandfather had suffered from incurable stomach ulcers. At the age of 49, unable to endure the pain and support his family, he took his own life.

In late July, Alexis, Shaina, and Iarrived in Vienna. The next morning, Barbara met us in our hotel lobby. We hopped into her car and drove to the city’s massive Central Cemetery (Zentrafriedhof). More than 3 million people have been buried in its different sections (Jewish, Christian, Protestant, Russian Orthodox, Greek Orthodox, and Muslim) since 1874, and it is still in use.

First, Barbara guided us to my great grandfather’s grave. Because of the repair work, I was happy to see it was the best looking grave in the row! It was also an eerie feeling to later stand at my grandfather’s grave—the very spot where I knew my dad as well as his mother, brother, and sister had once stood. The realization that we had traveled across the world to honor our ancestor on the 100th anniversary of his death added an aura of sanctity to the moment.

“Standing at the graves of my great grandfathers,” Shaina told me, “I understand that I am related to the bodies beneath the earth and tombstones, that I am alive because of them. I feel satisfied, and fulfilled, in pinpointing my lineage.”

After our cemetery visit, Barbara led us to the buildings where my father had lived. Some were prewar; others had been destroyed in the war and rebuilt in the ’50s and ’60s. In one instance, when the original edifice was not there, we entered a neighboring building that was architecturally similar to the one in which he had lived, taking in the beautiful craftsmanship of the woodwork around the doors and the detailed plasterwork on the walls and above each entrance.

Then we made our way to the City Temple (Stattemple), where my father had become a bar mitzvah in 1913, the year following his father’s death. Built in 1826, it was the only synagogue in Vienna to survive the war, though it had been desecrated by the Nazis. After the war, with funding from the city of Vienna, the building was restored to its original beauty. Now it is open for twice daily tours on Mondays through Thursdays—but security is tight. We had to enter one at a time, present our passports to the guard, answer his questions, then pass through both a metal detector and bulletproof glass sliding doors.

At last, we entered the sanctuary. It was sublime. The round space, accentuated by a repeating circular motif decorated in blues, golds, and dark woodwork, enveloped me. Above the golden ark stood two golden tablets inscribed with the Ten Commandments, and the soft blue ceiling was covered with hundreds of small gold Stars of David that reminded me of God’s promise to Abraham. “It’s amazing,” Alexis told me, “to sit inside the same synagogue that my grandfather attended on Shabbat 100 years ago. Even though I never met him, by being here, I feel connected to him.”

The guide, a petite, well-spoken Viennese woman, narrated a history of the synagogue, Vienna, and the city’s Jews. Security at the City Temple has been tight, we learned, ever since a 1982 terrorist attack on the building.

As we were about to leave, at my daughters’ urging, I asked our guide, “Do records exist of those who celebrated their bar mitzvahs in the synagogue?”

“Why do you want to know?” she queried.

“My dad had his bar mitzvah here,” I explained.

“You must visit the archive room,” she said. “Wait here.”

She spoke to the guards, and soon we were ushered through a second set of bulletproof glass doors, up a flight of stairs, and into the archive room—a 10'x10' space with floor-to-ceiling shelves containing the birth, marriage, and death records of every Jew born in Vienna from 1826 through 1938.

The archive’s historian, Wolf-Erich Eckstein, asked me for my father’s name and birth date. After a few quick clicks on his keyboard, he pulled one of the ledgers off a shelf and carefully flipped through the pages until…there it was, my father’s name, along with his birth date, information about his parents and grandparents, the delivering doctor’s name, and the date of my father’s circumcision—all written in beautiful script and filling nine columns across two pages. I was awestruck, speechless, and teary eyed. This, too, felt like sacred space.

Wanting to worship with a community of Jews in this city of my family history, I decided to attend Shabbat services at Vienna’s only Progressive congregation, Or Chadash. I also felt the need to thank God for this incredible journey I was taking with my daughters.

It took us a while to locate the building. When we finally reached the right street, we saw nothing resembling a synagogue. There was also no signage on any of the doors, all of which looked indistinguishable from one another. But then I noticed a man blocking the entryway to one of the buildings. He wore street clothes, but his bearing said “security guard” to me. As we approached, I looked at him and inquired, “Or Chadash?” He smiled, I wished him “Shabbat Shalom,” he returned the greeting—and then opened the door.

The sanctuary was a simple room filled with about 40 green, blue, and white plastic chairs split by a center aisle, and a dark wood ark at the far end of the room. Though sparse, the space was lovely and warm. After all I’d experienced in Vienna, it felt good to cradle a siddur (prayer book) in my hands. I listened to familiar tunes and prayers and tried to join in, but my voice was muted by emotion. I kept thinking of my father and all that his family had endured during their lifetimes. I wondered if Dad somehow knew that his daughter and granddaughters were in the city where he came of age as a Jew on the 100-year anniversary of his father’s death. My feelings were so apparent, when the gentleman running the service paused for people to mention names for Kaddish, he looked directly at me first, naturally assuming that I had a name to share. I just smiled appreciatively and shook my head.

At my side, Alexis was feeling ecstatic. “Being in Vienna, singing the same songs, reciting the same prayers, I realized: We are one! We are Jews, no matter the sect, where we are from, or the size of the congregation. It’s so good to know that wherever I travel I can walk into a synagogue and feel at home! This is why my connection to Judaism is strong. Even though I live in Las Vegas, hundreds of miles away from the family, I am always connected to a united community and family, the Jewish people.”

It was after services, at the Kiddush, that my new life purpose revealed itself. Speaking with Giuliana Schnitzler, the congregation’s vice president, I learned that the government had just passed a law awarding the Orthodox Jewish community sole power to determine which synagogues are legitimate and therefore eligible for government assistance. Since the Orthodox community does not recognize the Progressive Jewish Movement, Giuliana explained, Or Chadash was at risk of having to close.

As a Jew, an American, and the child of a Holocaust survivor, I found it unconscionable that in 2012 Vienna, Jews were still at risk of not being able to pray as they choose to. Leaving the synagogue that evening, I vowed to join the struggle to save Or Chadash. So many people had been silent as Jewish freedoms were trampled in Europe, as my grandmother and uncle died in the Holocaust. I would not be silent now.

Or Chadash had made a strong ally.

Since coming home, I have become an advocate for Or Chadash’s legitimacy in Vienna. I’ve written to the Federal Minister for Education, Arts, and Culture in Vienna and to the U.S. ambassador to Austria. I stay abreast of developments and inform my rabbis, who are now determined to help, too.

I went to Vienna in search of my ancestors and came away with a sacred mission. 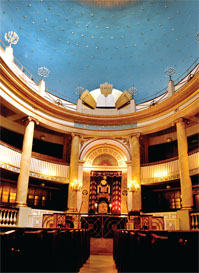