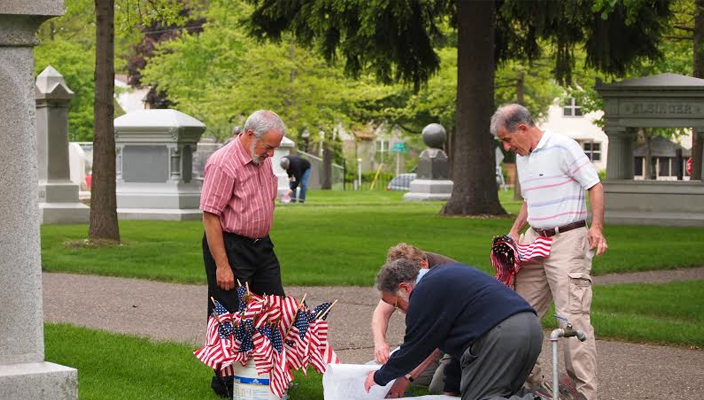 One of the great lessons in democracy was taught by a chaplain during World War II, Rabbi Roland Gittelsohn. Rabbi Gittelsohn helped to dedicate the Fifth Marine Division Cemetery on Iwo Jima in April 1945. Burying the dead was extraordinarily difficult during the battle of Iwo Jima, and so the dedication of the cemetery afterwards was a particularly solemn and disturbing occasion. [i]

[These men], said Rabbi Gittelsohn, "have paid the ghastly price of freedom. If that freedom be once again lost…the unforgivable blame will be ours, not theirs. So it is we, the living, who are here to be dedicated and consecrated."

"We dedicate ourselves," he said, "to live together in peace the way they fought and are buried in this war. Here lie men who loved America because their ancestors generations ago helped in her founding, and other men who loved her with equal passion because they themselves or their own fathers escaped from oppression to her blessed shores. Here lie officers and men…, rich… and poor-together. Here are Protestants, Catholics and Jews-together. Here no man prefers another because of his faith or despises him because of his color…Among these men there is no discrimination, no prejudice, no hatred. Theirs is the highest and purest democracy.

"Any man among us, the living, who fails to understand that will thereby betray those who lie here dead. Whoever of us lifts his hand in hate against a brother or thinks himself superior to those who happen to be in the minority, makes of this ceremony and of the bloody sacrifice it commemorates an empty, hollow, mockery…"

We have come a long way in 65 years. An interfaith Memorial Day Ceremony speaks volumes about the values we cherish in common.

My own tradition offers the following wisdom: "We do best homage to our dead when we live our lives most fully…for each of our lives is worth the life of the whole world." [ii] On this Memorial Day, we remember those who gave their lives in the service of democracy, and rededicate ourselves to fulfilling the vision upon which this nation was founded.

Rabbi Dr. Laurence Milder has earned a national following for his light-hearted, ironic take on Jewish music. He is known for popular Jewish songs such as "Wherever You Go" and "Stars in the Sky."