This beloved poem, L’cha Dodi, dates back to the 16th century Safed. Found in the Kabbalat Shabbat worship among Jews the world over, L'cha Dodi has perhaps more melodies associated with it than any other liturgical text. According to Abraham Z. Idelsohn, there were more than 2,000 known melodies to the text of L’cha Dodi in 1929. 1* (Jewish Music: Its Historical Development p. 116)

Fast forward to a survey of ninety three cantors and the research of ethnomusicologist, Dr. Mark Slobin, published in the year 2000. Here we learn that there are 184 melodic variants for L’cha Dodi among these cantors’ congregations alone. 2* (Jeffrey A. Summit, The Lord's Song in a Strange Land: Music and Identity in Contemporary Jewish Worship; Oxford University Press, 2000, p.39) For the sake of an organizing principle, then, the examples that will be presented in the following paragraphs will attempt to reflect the melodic variety of eydot haolam, or Jewish communities around the globe. So settle into your “armchair” as we begin our travels in 19th century Europe and the birthplace of the Reform Movement.

Often in Ashkenazic practice a prayer is rendered in a specific mode; L’cha Dodi is often chanted in the Adonai Malach modality. There are others who would contend that with L’cha Dodi there is no such stricture, the sky is the limit. Not surprisingly then, we find that the musical traditions of a host country are imprinted in the tunes attached to the text of L’cha Dodi. The rhythmic iambic tetrameter refrain makes possible the application of multiple musical meters, such as this waltz like setting found in a well loved version by Louis Lewandowski. Lewandowski spent his teenage years and adult life serving as music and choir master in the Jewish community of Berlin. Influences of the romantic styling of Schumann and Brahms and the likes are heard throughout his work. Lewandowski’s lifetime in Berlin was simultaneous with the nascent period of Reform Judaism and as such influenced by the German folk traditions as well as the musical practices of the Lutheran and Protestant Church.

At Congregation B’nai Jeshurun (BJ) in New York City, ethnomusicologist Dr. Mark Kligman reported on his research in 2002, “that it (the music) is a mixture of styles – generational and cultural. They use Argentinean and German music from 100 years ago and Israeli melodies from two years ago; they don’t use music that is “jazzy, American or Latin” and don’t use solo guitar accompaniment. Those musical styles are seen as just entertainment.3* ( Minutes of the JCRL and JCSM Meeting, April 2003) It is noteworthy that the founding Rabbi Marshall T. Meyer, three of the Rabbis and the music director are all natives of Argentina. BJ Rabbi Felicia Sol suggests that prayer should “integrate the mind and the soul and challenge and touch both.” 4* (BJ: A Model for a Revitalized Synagogue Life by Dr. Mark Kligman and Dr. Ayala Fader) At B’nai Jeshurun, L’cha Dodi is the high point of the Kabbalat Shabbat section of the service, and is often stretched to last fifteen minutes. Listen to this excerpt from a medley arranged by Ari Priven, musical director at B’nai Jeshurun. This traditional Turkish melody is the second of four tunes used to encompass all of the nine verses of the L’cha Dodi text. In the medley the musical mood shifts to follow the contours of the text, mindful of the transition between welcoming the Shabbat Bride and the ruined and abandoned city of Jerusalem. Another of the melodies is identified as a traditional Bulgarian melody. According to Priven though, his choices are made with “purposeful attention to the timing, tempo and texture of each melody and the transitions between them.”5* ( BJ: A Model for a Revitalized Synagogue Life) All this may be the hidden key that unlocks and fosters the success of this powerfully present and participatory congregational community.

The Jews of Uganda (Abayudaya) were until recently a little known community of some 600 souls living in the villages surrounding Mbale in Western Uganda. Dating back only to 1919 when their ancestors converted to Judaism, the Abayudaya were separating themselves from the Christian missionaries and British political rulers of that time period. Having endured interim years of persecution for a significant part of the 20th century, a resurgence of the community in the 1980’s was led by J. J. Keki and Gershom Sizomu. They developed a new style of music influenced by their native language Luganda. When Sizomu attended the Hebrew Union College – Jewish Institute of Religion­ in 2001 these heretofore unknown melodies began to work their way into the broader Jewish world community. Listen to this recording of L’cha Dodi sung by the Abayudaya of Uganda. Notice that often a vowel sound is added to the end of the Hebrew word (such as Likrat- ee), reflecting the influence of Lugandan.

Paul Ben Haim 1897 – 1984 (born Paul Frankenberger in Munich, Germany) is perhaps the most prominent Israeli composer of the 20th century. His works range from instrumental symphonic and chamber works to exquisite art songs and liturgical music. In 1966 Ben Haim was commissioned to compose a service for the Union Prayer book for NFTY; premiered in the spring of 1968, in the preface to the score Ben Haim states, “I have tried to set the prayers to music in as simple and modest a style as possible to express the spirit of the Jewish Liturgy…according to the request of the commissioning body.” The refrain of this L’cha Dodi is an example of contrafactum, the substitution of one text for another without substantial change to the melody. In this case the tune for the refrain was originally set by Leon Algazi to the text of Y’did Nefesh.

Debbie Friedman appeared on the NFTY scene but a few short years after the commission mentioned above, and in 1972 she released her first recording, Sing Unto God. It was a stark contrast to the through composed choral versions that are typical of Reform worship of the 70’s.Here for the first time we hear a distinctly American cultural influence through the use of guitar accompaniment and the folk/rock style of the music for L’cha Dodi. Other contemporary American performers have followed suit with their own uniquely updated cultural imprints. Listen to the increased use of instrumentation in this L’cha Dodi by Craig Taubman. Although commissioned originally by a conservative congregation, this somewhat raucous setting from Taubman’s Friday Night Live service reflects an evolution in Reform Worship practice that arose in the late 1990’s – concurrent with Rabbi Eric Yoffie’s call for Worship Transformation in 1999. Synagogue bands and instrumental ensembles in worship were at that time revolutionary. A more tempered version ofL’cha Dodi by Craig Taubman is finding current popularity.What started as revolutionary in 1999 has evolved a full revolution by 2010. What L’cha Dodi musical styling will be next? Only time will tell! 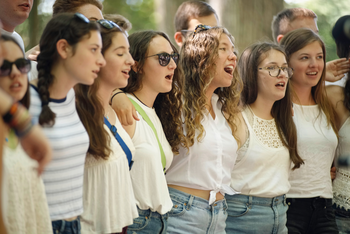