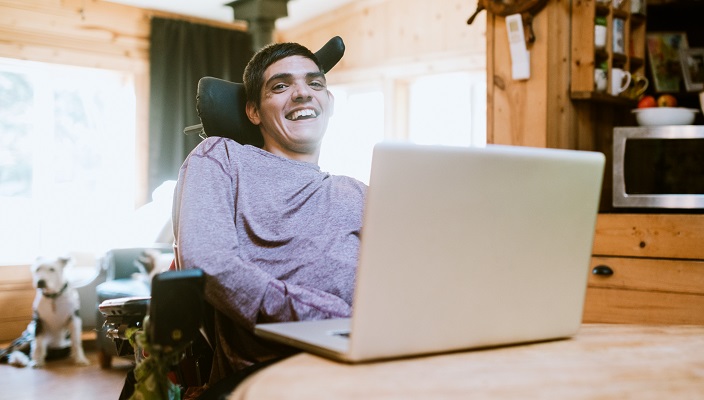 With more than 100 startups, Israeli entrepreneurs are among the world leaders in developing assistive technologies for people with disabilities.

Their success owes, in large measure, to support from both the government and university sectors, as well as some startup accelerators led by and for people with disabilities, such as A3i, which partners with four Israeli and American-based non-profit and philanthropic organizations: PresenTense, Beit Issie Shapiro, The Ruderman Family Foundation, and The Jewish Federation of Greater Los Angeles.

Here are six ingenious Israeli assistive technological advances (and their creators) that are making a huge difference.

After Amit Goffer suffered a bad accident and began using a wheelchair, the engineer developed a wearable robotic exoskeleton that enables individuals with spinal cord injuries to stand upright, walk, turn, and climb and descend stairs.

This mobility device enables children with neuromuscular disorders to stand and walk with the assistance of an adult. The device was conceived by Israeli musician Debby Elnatan, whose son, Rotem, has cerebral palsy. When Rotem was 2 years old, physiotherapists advised Elnatan to walk with her son regularly to strengthen and increase awareness of his limbs.

With the help of product engineers at Leckey, a company that specializes in the development of products for children and adults with disabilities, Elnatan devised a harness system with specially engineered sandals that allow the adult and child to step in synch.

The first completely touch-free smartphone allows people with limited or no use of their hands to make calls, send emails, and engage on social media by responding to voice and head movements.

It was co-developed by Giora Livne, an Israel Defense Force veteran who is paralyzed from the neck down, in partnership with game developer Oded Ben Dov. The idea came to Livne when he saw Oded demonstrate gesture technology for a game he had developed.

Designed to work on any mobile or wearable device, this voice recognition app allows individuals with speech or language impairments to communicate in their own voices by translating unclear pronunciations – in any language! – into more widely understood speech.

Danny Weissberg co-founded VoiceITT, maker of the TalkITT, after his beloved grandmother had a stroke that affected her speech.

Controlled by voice and touch, this smartphone gives people who are blind or visually impaired the ability to make phone calls, access apps, read and send text messages and emails, set calendar reminders, and use GPS navigation.

Project RAY was conceived of several years ago by a group of telecommunications figures, headed by CEO Boaz Zilberman of the Migdal Or Blind Rehabilitation Facility in Kiryat Haim, near Haifa. One of the reasons his company developed the Project RAY, Zilberman explained to a reporter at No Camels Israeli Innovation News, was to integrate people who are blind and visually impaired, into a society that is reliant on smartphones.

This app, developed by Hebrew University neuroscientist Amir Amedit, translates everyday objects into basic sounds and pitches, enabling people who are blind or visually impaired to “see” through hearing music.

“The human brain is more flexible than we thought,” Dr. Amedi told a Times of Israel reporter. “These results … suggest that for individuals who are blind, brain areas have the potential to be ‘awakened’ to processing visual properties and tasks, even after years or maybe even lifelong blindness, if the proper technologies and training approaches are used.”

These innovations represent just a sampling of cutting-edge technologies that have not only improved the lives of people with disabilities in Israel – which number 1.7 million in a population of just over 9 million – but breaking accessibility barriers for people around the globe.