10 Tips from the Spielberg of Purim Spiels 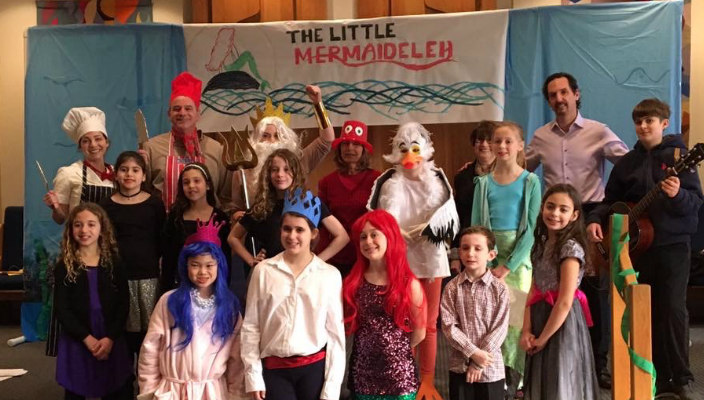 What makes for the perfect Purim spielPurim spielפּוּרִים שְׁפִּילHumorous play performed as part of the celebration of Purim. ? Cantor Marnie Camhi, who serves Temple Beth Miriam in Elberon, NJ, has become a bit of an expert. In addition to composing liturgical music, she has created 10 original Purim-spiels, which have been performed in hundreds of congregations and day schools throughout the United States and Canada.

We sat down with Cantor Camhi, who was ordained by the Debbie Friedman School of Sacred Music of Hebrew at Union College-Jewish Institute of Religion, to learn more about the art of the Purim spiel.

ReformJudaism.org:  How do you go about creating a Purim spiel?

Cantor Marnie Camhi: I take characters from popular culture and adapt them to the cast of the original Book of Esther, usually as a musical parody. The idea is to get the audience to relate more easily to the Purim story and to get bigger laughs.

For instance, in my first Purim spiel, based on the Disney flick Frozen, Esther is Anna, Vashti is Elsa, the king is Kristoff, and so on.

How did you come to choose Frozen as you first theme?

In the fall of 2014, my daughter, who was in preschool at the time, was super into that movie. It was constantly playing in my house, and consequently in my head, so having been tasked with finding a theme for our next Purim play, it was the obvious choice.

I quickly discovered that it didn’t exist as a Purim spiel, so I said to our rabbi, Cy Stanway, “What if I wrote one?” And he said, “That’s a fantastic idea.” It literally took me three hours to write the first draft – the characters, the songs, everything.

You went on to write three more within the next month, discovering that you had a knack for the genre. What advice can you give us on how to present a successful Purim spiel?

Here are my top 10 tips for anyone who’s creating their own Purim spiel:

How do you share your Purim spiels with others?

From the beginning, our congregation decided to make them available as a fundraiser. For $72, you get a script and a score (for the musical), along with a vocal track for rehearsals and a karaoke track for performance purposes, if you don't have live musicians. If you’re going to be burning CDs, we provide printed labels.

Which have been your most popular Purim spiels so far?

Star Wars and Frozen are our best-sellers.

What’s your theme for this year?

This year, we’re doing Purim Pop Palooza, which is based on eight hit songs from 2013 to 2019 that the kids and most adults know. They include “Bad Guy” (a.k.a. Haman) by Billie Eilish and “Fight Song” by Rachel Platten, which Esther sings after she learns of Haman’s evil decree that the Jews of Shushan would be killed.

Has anyone ever called you the Spielberg of Purim spiels? I will.

No, but I’ve been called the “Purim spiel Queen.”

To order a Purim spiel, visit Temple Beth Miriam’s website, where you can choose from spiels based on Frozen, Moana, Star Wars, The Little Mermaid, The Big Bang Theory, The Marvelous Mrs. Maisel, Descendants, Finding Dory, and others.