How Reform Judaism Got it Right with LGBT People

How Reform Judaism Got it Right with LGBT People

I grew up in Potomac, MD, right outside of Washington, D.C. Like most young people in my area, growing up I had had little interaction with gay people, who were nearly invisible in suburbia. (Even though it was a liberal area, my public school taught “abstinence-only” education until as recently as 2004!)

I played soccer on my high school team, which had a designated “team fag,” who wasn’t actually gay but who the team would laugh at and deride. For years, my high school principal wouldn’t allow us to use the word “gay” in school club names because it was “too controversial,” so only my senior year when a new principal arrived did the Alliance For Understanding finally become the Gay-Straight Alliance.

There was one place in my life where I actually hear people talking about gay people, and that was at synagogue. At Temple Beth Ami, unlike at my school, we discussed topics like the gay community and the fact that some people may not want to wait until marriage to have sex. I attended a youth group kallah (retreat) through NFTY, where I met gay, bisexual, lesbian, questioning, queer, and even “heteroflexible” youth. I’m pretty sure NFTY coined that term, which just goes to show how open-minded a place it was – and yet, due to years of homophobic experiences big and small, I wasn’t yet ready to see that I was gay.

When I was ready to recognize this holy part of myself, one of the first people I came out to was Cantor Larry Eschler, my synagogue’s chazzan). He was openly gay, and I thought it was important to seek his guidance. Cantor Larry taught me something about self respect. My mom was worried I couldn't find a job as an out gay man, suggesting maybe I shouldn't reveal my identity. When I asked Cantor Larry about it, he said that I wouldn't want to work where I wasn't accepted anyways and that I would certainly find great opportunities. Rather than hide my identity, I decided to seek out places and people that affirm it.

As I grow older, I’ve realized just how much of a blessing it was to grow up in a Reform Jewish community where my identity – even before I knew I had it – was validated, welcomed, and accepted. So many gay people, Jewish and especially non-Jewish, grow up in religious communities that deny, shame, and persecute them. Instead, I was blessed to grow up in a synagogue with gay and allied clergy, an inclusive youth group, and supportive friends and family.

All Jewish movements have something to learn from each other about community, Torah, education, culture, and equality. The Reform Jewish community got LGBT issues right long before most of the Jewish world did, and it is something to be proud of. I’m grateful that I grew up in a congregation where my sexuality was embraced and where nobody would question my worth.

In honor of Pride Month, I wrote a Hebrew prayer in honor of diversity, be it sexual, gender, race, culture, language, ability, or otherwise. I invite you to read it this June when we celebrate the LGBT community and the principle that diversity is a source of strength for our community.

Blessed are you Adonai our G-d
Ruler of the universe
who created all types of wondrous people. 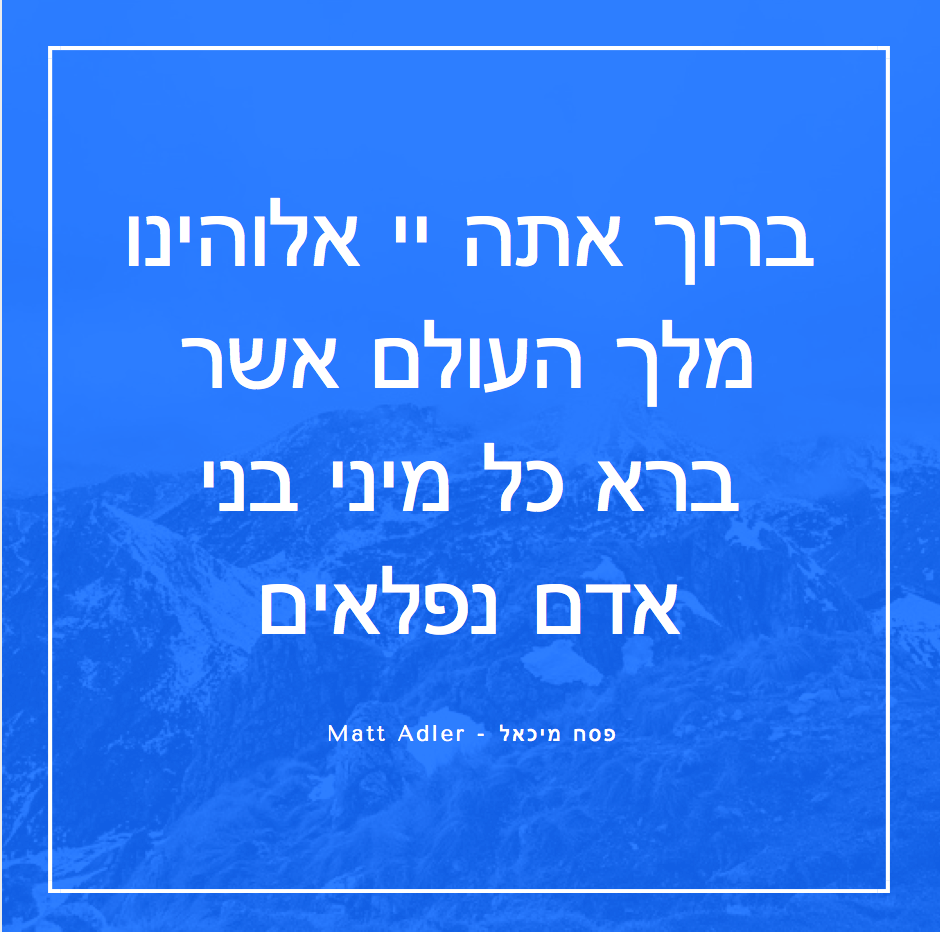 Matt Adler is a progressive gay activist passionate about tikkun olam (repair of the world) who grew up at Temple Beth Ami in Rockville, MD. He was most recently a member of Temple Micah in Washington, D.C., where he helped engage other young professionals in Jewish life. Recently, Matt made aliyah (moved to Israel) and now lives in Tel Aviv.

View all posts by Matt Adler