A Conversation with Celebrated Chef and Restaurateur Michael Solomonov

Chef Michael Solomonov, winner of a James Beard Award for best Mid-Atlantic chef, and his business partner, Steven Cook, established their landmark Israeli restaurant, Zahav, in Philadelphia in 2008. They have since published a cookbook by the same name and opened a variety of other eateries, including Percy Street Barbecue, Federal Donuts, and Rooster Soup Co., a Jewish deli-inspired luncheonette, the brainchild of his partner Steve Cook, which donates all profits to benefit the city’s homeless and hungry. I caught up with Chef Solomonov recently to talk about the defining influences that shaped his career as a chef.

ReformJudaism.org: You were born in Israel but spent your formative years in Pittsburgh, “feeling mostly American.” Yet you are best known for Israeli cuisine. How did that come about?

I signed on as the sous-chef at Marc Vetri’s Italian restaurant in Philadelphia in 2003, just before it closed for its three-week summer break, and took the opportunity to visit my family in Israel. My younger brother, Dave, was on leave from the military, so we had a chance to reconnect after a long separation. Since Dave had the inside scoop on many of Israelis best eateries, we traveled up and down the country, eating. For the first time, I saw Israel through the lens of a chef, and was impressed by the many ethnic influences.

Dave went back for his final month of military service, and I returned to Vetri. A few weeks later, while driving on the Pennsylvania Turnpike, I received an urgent message to call my Aunt Ava. I pulled over and got the news. “It’s David,” she said. “He’s dead. He was killed today in the North.”

David died on Yom Kippur, shot by Hezbollah snipers from across the border in Lebanon.  He had volunteered to cover a patrol shift for one of his religious comrades, so he could go to shul.

How did you handle your brother’s death in the Yom Kippur War?

The moment I returned from his funeral, my tendency toward drug addiction reared its head. I broke up with my longtime girlfriend and ended up sleeping on a futon in Vetri’s office. I considered joining the Israeli army to live Dave’s life – and probably die his death – but thankfully, Marc and my new girlfriend, Mary, talked me out of it.

How did you move from cooking Northern Italian to Israeli cuisine?

Marc told me that Steve Cook, a graduate of both Wharton and the French Culinary Institute, needed a cook for his little restaurant, the Marigold Kitchen, in West Philly. Steve’s fiancée Shira, it turned out, was an old Pittsburgh friend. I took that as a sign from the restaurant gods that moving to Marigold was the right decision.

I set free the Israeli influences that had begun to seep into my consciousness and started experimenting with Israeli food. The Yemenite soup I loved while attending an Israeli boarding school at age 16 found its way onto the menu in the form of braised monkfish with apple, celery root, and Yemenite spices. Grilled kebabs became lamb kofte, wrapped in cabbage and served in a pool of pink lentil soup. A food critic praised it as “Jerusalem in a bowl.” That was the light bulb dish for me.

The more my menu leaned toward Israel, the more passionate I became about cooking great food, and the more I began to see it as a way to honor David’s memory.

Zahav is a huge success. Did it start out that way?

When we opened in May 2008, its future was far from assured. Zahav was the first restaurant of its kind. What Americans knew about Israeli food then began and ended with hummus and falafel. Even Steve and I didn’t know what it meant to be an Israeli restaurant. During the first year, we were a month away from turning out the lights.

What turned it around?

We came to understand that Israeli food is not a static collection of traditional recipes. It is an idea. What connects the many restaurants in Israel – from Bulgarian to Arabic to Yemenite – is an approach to dining and hospitality shaped by a shared experience, particularly around the Shabbat table, embracing so many cultures.

Zahav is a kosher-style restaurant that does not serve pork or shellfish, and doesn’t use milk and meat in the same dish. How does that figure into the shared experience idea?

What does Israeli cuisine mean to you personally? 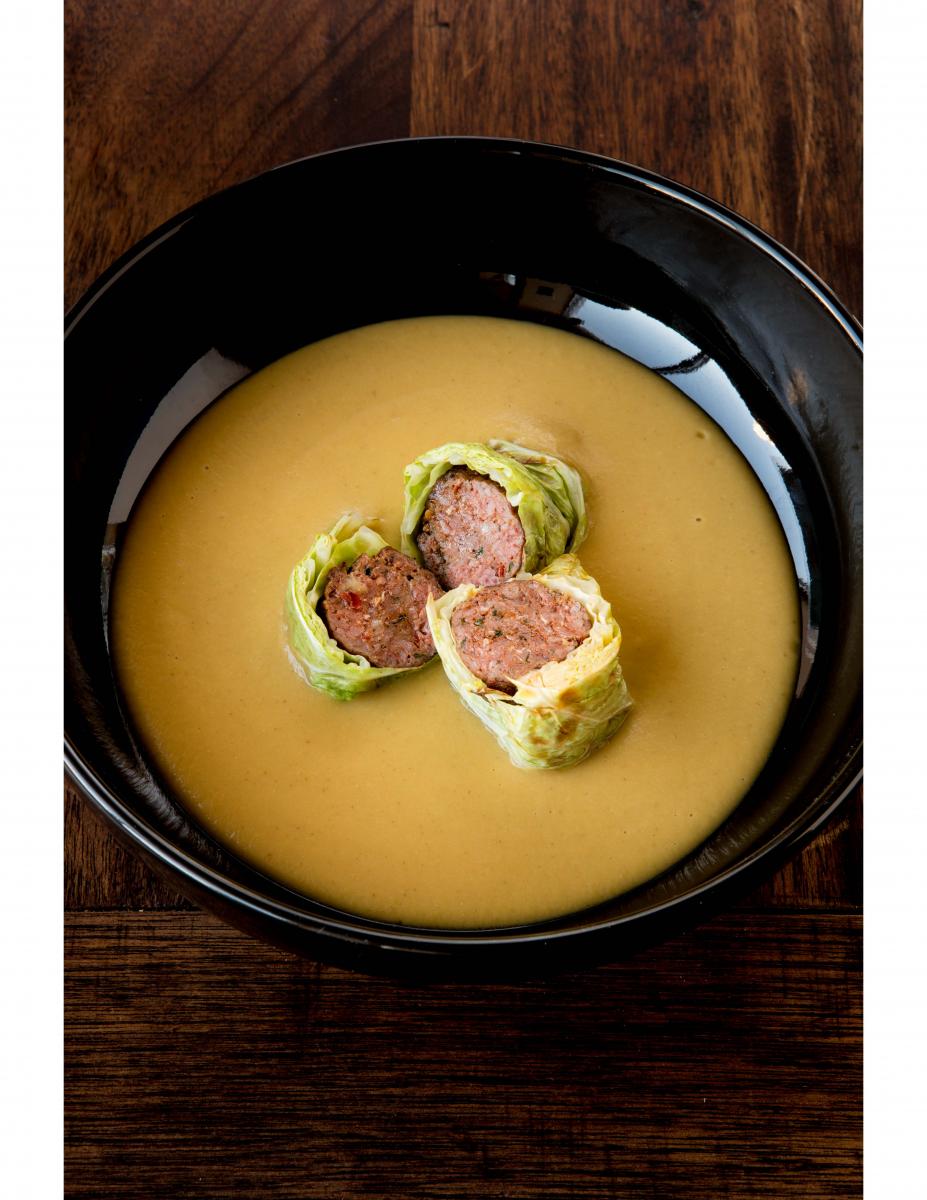 Try this recipe in your kitchen:

For the soup: Warm the oil in a large pot over medium heat. Add the lentils, carrot, garlic, cumin seeds, salt, and caramelized onions. Cook, stirring occasionally, until the carrot begins to soften, about 10 minutes. Add the chicken stock and turkey wings, if you like, raise the heat to high, and bring to a simmer. Reduce the heat to low and simmer, covered, until the lentils have fallen apart and the flavors have thoroughly blended, about 1 ½ hours. Discard the turkey wings if using. Puree the soup in a blender until smooth, adding up to 1 cup water to thin the soup to the desired consistency.

For the lamb kofte: Combine the lamb, onion, parsley, salt, sugar, black pepper, cinnamon, garlic, and club soda in a large bowl. Mix gently by hand until well blended. Cover with plastic wrap, pressing the plastic onto the surface of the mixture, and refrigerate for at least 1 hour or up to overnight.

Working with damp hands, form the mixture into logs about 1 inch in diameter and 3 inches long. Arrange on a plate, cover with plastic wrap, and refrigerate for 1 hour.

To cook the kofte: Heat ¼ inch oil in a large skillet until shimmering but not smoking. Add the kofte and sauté until nicely brown on all sides but still rare in the middle, about 3 minutes total.

To wrap and bake the kofte: Preheat the oven to 275 degrees F. Bring a large pot of salted water to a boil. Add the cabbage leaves and cook for 2 minutes, until softened. Transfer to a large bowl of ice water to chill, remove, and pat dry. Cut away and discard the tough vein at the bottom of each leaf, burrito style, and arrange in a small baking dish.

Lightly brush the wrapped kofte with oil and bake until the lamb is just cooked through, about 20 minutes.

To serve: Reheat the soup, ladle it into wide, shallow bowls, then slide in the lamb kofte.

We Have a Moral Duty to Welcome the Stranger

Why Did Roosevelt Abandon Europe's Jews?

We Have a Moral Duty to Welcome the Stranger
Jan 28, 2020|Aron Hirt-Manheimer

Then the Eternal One said to Moses, "Go to Pharaoh. For I have hardened his heart and the hearts of his courtiers, in order that I may display these My signs among them." - Exodus 10:1