Kickstarting the Jewish Future With Creativity and Innovation

Kickstarting the Jewish Future With Creativity and Innovation 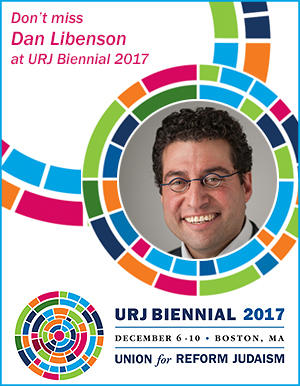 Dan Libenson is the founder and president of the Institute for the Next Jewish Future and co-host of the podcast, Judaism Unbound, which promotes radical creativity and bold innovation in American Jewish life. Dan spent over a decade working with Jewish students on campus at Harvard and at the University of Chicago. He is a recipient of the prestigious AVI CHAI Fellowship. I caught up with Dan to discuss his call for disruptive innovation in Jewish life.

ReformJudaism.org: Why do you think “disruptive innovation” is needed to kick start the Jewish future?

I believe Judaism has survived because it is not a static religion; in fact, it has thrived from what Harvard Business School Professor Clayton Christensen has termed “disruptive innovations,” a term he discusses in his book, The Innovator's Dilemma: When New Technologies Cause Great Firms to Fail. In Judaism, as in business, these paradigm shifts almost always originated with new players in the market, and not from the dominant players inside.

Can you provide an example from Jewish history?

More than 2,000 years ago, while the Second Temple still stood in Jerusalem, various small groups of Jews became dissatisfied with the way the priests were running the show. So they initiated a variety of small experiments, and, as a result, alternative ways of being Jewish started popping up. One of these was Rabbinic Judaism.

The new paradigm didn’t have the grandeur of the Temple; there was no chorus of Levites, no sacrifices, no drama. But Rabbinic Judaism was more accessible to poorer Jews who lived far from Jerusalem.

After the destruction of the Second Temple, the influence of Rabbinic Judaism accelerated. But make no mistake; it began as a disruptive innovation from the outside, having laid the groundwork for what essentially was a transformation of Jewish practice.

In later centuries, two Jewish fringe movements, Hasidism and secular Zionism, followed the same pattern of evolving and growing from the outside in, and both eventually attracted people from closer to the core.

Do you see a disruptive revolution bubbling up today?

Yes. The seeds of what I call the next Jewish future are already present both in innovative startups and new organizations, as well as institutions that are not generally seen as part of the disruptive revolution, such as Mayyim Hayyim in Boston, which has completely reinvented mikvah (ritual bath) for modern Jews, and contains within it the seeds of a new way of living Jewish life. Aesthetically gorgeous and run by passionate lay volunteers working side-by-side with professionals, Mayyim Hayyim empowers people to create new rituals using a traditional framework. It also emphasizes education and active outreach to the community. In short, it has the potential to become a complete vehicle for communal Jewish life.

You’ve called on the Jewish community to invest in a “new literacy” project. What would that look like?

If we want to accelerate disruptive innovation and change in Jewish life, we need to stop defining Jewish literacy as having some minimal level of knowledge that allows one to participate in Jewish life without feeling overwhelmed or alienated.

To accomplish this, we need a generation of literate Jewish disruptors.

We should be scouring the country looking for the most creative thinkers and doers, regardless of their current level of Jewish knowledge, and we should be inspiring them to believe that change is possible and that they are perfectly positioned to deliver the change we need – change from the outside in.

The Talmud tells us approvingly that some rabbis were known as okrei harim – uprooters of mountains – who used their learning to upend the system. They were the original disruptive innovators.

Imagine a Yeshivat Okrei Harim, a yeshiva dedicated to producing innovators who know and understand Judaism in the deepest possible way, but are free to remix it – think of jazz musicians – and to write the next chapter unencumbered.

As Rav Kook said – “to renew the old and to make the new holy.”

Dan Libenson will be a featured speaker at the Union for Reform Judaism's 2017 Biennial in Boston, December 6-10, 2017.