We Can’t Just Rely on the Old Tactics

We Can’t Just Rely on the Old Tactics 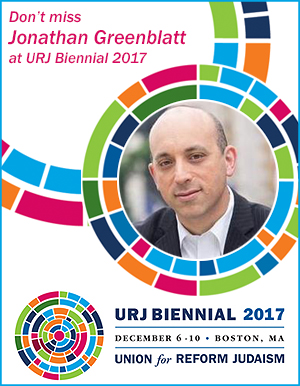 Jonathan Greenblatt made his name as a successful social entrepreneur, innovation expert, and senior advisor in the Obama Administration before becoming national director and CEO of the Anti-Defamation League (ADL) in 2015. He has since spoken out on numerous social justice issues. I caught up with him recently to get his take on the current state of anti-Semitism, its causes, and solutions.

ReformJudaism.org: The ADL tracks anti-Semitism. How have the metrics changed since you took the organization’s helm in July of 2015?

Jonathan Greenblatt: While anti-Semitic attitudes have remained consistent at 14% – we’re talking more than 30 million Americans – anti-Semitic incidents have been on the rise. In 2016 we saw a 34% increase over the prior year in acts of harassment, vandalism, or violence directed at Jewish individuals and institutions. During the first three quarters of 2017, there was a 67% increase over the same period in 2016. We’ve seen double the number of incidents in K-12 schools, and almost a 60% increase on college campuses.

What factors account for this surge of anti-Semitic incidents?

Extremists on the right feel emboldened. They think they have a champion in President Trump, who hasn’t necessarily called out the white supremacists with the same quickness he’s brought to other issues. I think it’s also fair to say that anti-Israel rhetoric has really heated up, and this has emboldened some elements on the left. In some progressive communities, the State of Israel is often a proxy for Jews. The way Israel is demonized is similar to the way Jews themselves have been demonized. You can almost do a search and replace, where you see that many of the epithets hurled at Israel today are like those hurled against Jews across different geographies throughout history.

The so-called alt-right and fringe left are enhanced and amplified by social media, exploiting Twitter, Facebook, and other platforms to spread troubling stereotypes.

How is anti-Semitism related to other kinds of prejudice and racism?

You cannot successfully fight against anti-Semitism without fighting against all forms of racism and prejudice. Americans who hold anti-Semitic views are typically intolerant of immigrants, Latinos, Muslims, and the LGBTQ community as well.

Anti-Semitism is the canary in the coalmine. When it is present in a society, other forms of hate are not far behind.

Why do you believe that hate speech should be protected?

The First Amendment protects free speech and expression. It is very important, however, to distinguish between hateful speech and harmful speech. Freedom of expression is not freedom to incite violence. When the founders envisioned freedom of speech, they did not envision it to mean freedom to slander or to terrorize people because of what they believe.

Hate speech can make us feel very uncomfortable, but that’s part of the price we pay for the right of free expression. Our democracy has survived and thrived in part because of the freedoms enshrined in the First Amendment, and the Jewish people have never enjoyed such privilege as we do in this glorious democracy.

Why did the ADL file an amicus brief challenging President Trump’s executive order seeking to ban entry into the U.S. by people from seven majority-Muslim nations?

The Constitution bars prohibitions based on religion. That said, we feel compelled to speak out on immigration because we remember when our people were prohibited from coming to these shores in the 30s and 40s, a time when we had real need, when we faced the calamity of the Shoah. We spoke out against the Muslim ban not only because we thought it was unconstitutional, but also because we thought it was inconsistent with our values as a people.

What are the greatest challenges facing American Jewry today?

The rise in extremism, cyber hate, the spreading of stereotypes on social media, and a political environment in which the pillars of liberal democracy are challenged. One of the greatest internal Jewish challenges is pernicious polarization. When Jews fight with other Jews, the anti-Semites win.

What is the ADL doing to counter anti-Semitism?

First, we take a values-based approach, which is about principle and not politics. Second, we utilize different levers, including advocacy, education to inoculate communities and children against intolerance, and we train law enforcement officers to deal with issues of hate and extremism. Third, we are taking proactive measures to pioneer new strategies. And, finally, to make an impact as our society is changing, we try to use innovation, experimenting with new models to master social media and other platforms. We’re partnering with Google to use artificial intelligence to neutralize online harassment. And we’re launching a problem-solving lab that will use different engineering approaches and techniques.

We can’t just rely on the old tactics.

Jonathan Greenblatt will be a featured speaker at the Union for Reform Judaism's 2017 Biennial in Boston, December 6-10, 2017.