A Conversation with Dr. Andrew Rehfeld

Andrew Rehfeld, Ph.D., is the 10th president in the 144-year history of Hebrew Union College-Jewish Institute of Religion (HUC-JIR). Having served as associate professor of political science at Washington University in St. Louis and as president and CEO of the Jewish Federation of St. Louis, Dr. Rehfeld’s career has bridged the academic and Jewish worlds. 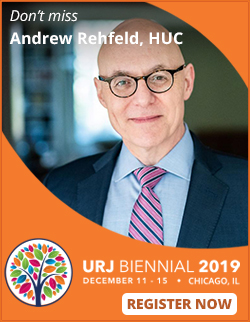 I sat down with him at the New York City campus of HUC-JIR to ask him about the path that led to his new role.

ReformJudaism.org: Who were your Jewish earliest influencers growing up in Atlantic City, Philadelphia, and Baltimore?

During my early childhood, the strongest was my grandfather, Maurice M. (“Morris”) Slotnick, a hazzan (cantor) who also had studied to be a rabbi. My mom, older brother, and I lived with him and my grandmother in Atlantic City, where family members engaged in intense political dialogue every Friday night around their Shabbat table.

My mother gets a lot of credit as a single mom for raising my brother and me to be Jewishly educated and highly identified with the community. In Philadelphia, I went to Main Line Reform Temple, where I became a bar mitzvah. In Baltimore, my dad and stepmother got me involved with Baltimore Hebrew Congregation, where, as a young adult, I really connected to the Reform Movement.

You were active in your temple youth group, were a songleader at Jewish summer camp, and prior to graduate studies, worked as regional director of the New Jersey region of NFTY: The Reform Jewish Youth Movement. One might have expected you to land at HUC-JIR sooner. What led you instead to study public policy and political theory at the University of Chicago?

Many of my friends did go to HUC-JIR, and for many years I carried around an HUC-JIR application that I never filled out, mostly because I was struggling with what it meant to be committed to reason and a scientific approach to life versus taking a leadership role as a religious leader. Religious life was enormously important to me, but I thought I could make an equally strong contribution as a lay leader and that it was possible to live a deep and meaningful liberal Jewish life without being a rabbi.

You're the first president of HUC-JIR who is not a rabbi. Does this signal a change in the College-Institute’s direction?

It does not represent a lack of commitment to the centrality of the rabbinate. I think it reflects the board’s recognition that many students who want to serve in the Jewish public sphere desire a broad set of leadership skills that they can use in congregations, day schools, community centers, Hillels, Jewish federations, or in any number of different or alternative Jewish settings. It is a matter of how to best lead an institution that shares a role with the Union for Reform Judaism (URJ) and its president Rabbi Rick Jacobs in addressing the challenges facing North American Jewry.

What have you learned in your academic work and as a federation head that will guide you in your new position?

One area of my academic research was institutional design, the interface among moral ideals of justice, human rights, and democracy, and the institutions we use to realize them.

I went to work at the federation because I believed, and still believe, that federations have the potential to change people’s lives toward the good, the right, and the just.

Guided by this idea, my first order of business at federation was to create a workplace environment that achieved five key principles – integrity, kindness, openness, accountability, and trust. By creating such an organizational culture, my hope was that those ideals would be spread both within and outside the Jewish community.

Primary to me is building and structuring the future of HUC-JIR on strong management principles predicated upon the ethical and moral precepts of liberal Judaism.

HUC-JIR requires rabbinical, cantorial, and education students to complete their first year of study at the Taube Family Campus in Jerusalem. How important is HUC-JIR’s presence in Israel?

I believe that to be an effective Jewish leader, you need to understand our people’s connection to Israel, where half the world’s Jews live today. There also needs to be an appreciation that Israel is the national project of the Jewish people, and it is well under way, with liberal Judaism playing an increasing role.

The 108 Israeli rabbis we have trained in Jerusalem are promoting Jewish pluralism, opening new paths for religious expression and engagement, and working toward creating a Jewish state that honors the democratic and human rights of all Jews and Palestinians in Israel.

What do you do for leisure?

I play guitar. I read. My wife and I enjoy streaming shows like “The Marvelous Mrs. Maisel,” which reflects a stylized vision of my predecessors, who struggled with what it meant to be American at another time of great change for Jewish community.

Dr. Rehfeld will be a featured speaker at the Union for Reform Judaism (URJ) Biennial, the largest Jewish gathering in North America, held December 11-15, 2019, in Chicago, IL. Register now to join thousands of Jews from around the world to learn, pray, share ideas, dance and sing, hear from inspiring speakers, reunite with old friends, create new connections, and more.