Rich Cohen is the author of 13 books, including Tough Jews: Fathers, Sons, and Gangster Dreams, Chicago Cubs: Story of a Curse, and The Fish That Ate the Whale: The Life and Times of America’s Banana King. He is a contributing editor at Vanity Fair and Rolling Stone, and co-wrote the television series, “Vinyl.” He’s a member of Congregation Shir Shalom of Westchester and Fairfield Counties in Ridgefield, CT. I sat down with Rich to talk about his literary legacy. 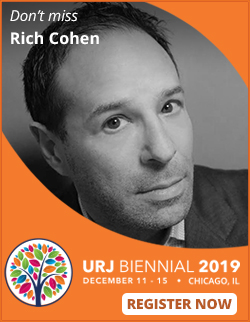 ReformJudaism.org: When did your fascination with Jewish gangsters begin?

Rich Cohen: I grew up in a suburb of Chicago. While other parents told their kids traditional bedtime stories, like The Three Little Pigs, my father was telling me about the legends of his New York childhood – gangsters like Louis “Lepke” Buchalter and Meyer Lansky. I could never really tell if they were real or if they were mythical. As soon as I was old enough, I moved to New York in search of the truth behind my father’s stories.

What was it like growing up Jewish outside Chicago?

We were the only Jewish family in Libertyville and had to drive a long way to go the nearest synagogue. One day coming back from religious school, I was injured in a bad car accident. After that, my mother insisted we move to Glencoe, which had a larger Jewish community, and we  joined North Shore Congregation Israel.

When did you become a fanatic Chicago Cubs fan?

I was 8 years old when my father took me to my first Cubs game at Wrigley Field. The Cubs lost to the Reds. On the way home, my father begged me not to be a Cubs fan. He said Cubs fans will have a bad life, because they accept that losing is the natural outcome of every human endeavor and consequently achieve less. They’ll know nothing but misery and pain. So, of course, I became one of the biggest Cubs fans in the world.

What is the backstory of Sweet and Low: A Family Story, your book about how your grandfather and his son invented the popular sugar substitute?

After my grandfather died, I realized that all my cousins were really rich. They got this huge fortune, and we got nothing. I was telling someone my grandfather’s amazing story – how he invented the sugar packet, the soy sauce packet, the vacuum pack, and Sweet’N Low – when I felt this little tug, like a voice saying that's not your story anymore, you're disinherited. At that moment, I felt that the story itself was my inheritance and turned it into a bestselling book.

The Fish That Ate the Whale: The Life and Times of America's Banana King is about a penniless Jewish immigrant who had become one of the richest most powerful men in the world. What attracted you the story of Samuel Zemurray?

I was first attracted to him while a student at Tulane University in New Orleans, Louisiana, where his company was headquartered. He reminded me of my grandfather, who had also come through Ellis Island to seek his fortune. Zemurray ended up in Selma, Alabama, where he bought and sold a cart of freckled bananas and made a $100,000 profit before he was 19 years old.

He eventually took over United Fruit Company, served in Franklin Roosevelt’s kitchen cabinet, became a big macher (Yiddish for mover and shaker) at Temple Sinai in New Orleans, and played a key role in the struggle for Jewish statehood by getting all the banana republics to vote in the U.N. for the partition of Palestine.

You continue the Jewish immigrant, American dream theme with your book Machers and Rockers: Chess Records and the Business of Rock and Roll, the story of the Polish-born record producer, Leonard Chess.

Leonard had a liquor store in a Jewish neighborhood bordering a Black one on the south side of Chicago. After buying a bottle, some of his Black customers partied at the store with the musicians among them playing some tunes. Chess had this idea to turn the place into a nightclub, and the place attracted musicians who were part of the great migration from the South.

Somebody came in one night and said he wanted to record one of the musicians, and Chess said he would do it himself, founding the Chess Records label. The second person he recorded was Muddy Waters, who had just arrived from Mississippi. He went on to record many greats, including Howlin’ Wolf, Jimmie Rodgers, Chuck Berry, and the Rolling Stones.

You return to the gangster theme in your new book, The Last Pirate of New York: A Ghost Ship, a Killer, and the Birth of a Gangster Nation. What drew you to the story of Albert Hicks, New York’s most feared man in the 1860s?

I came across the story of Albert Hicks while researching my book on Murder, Inc., the Jewish mob of Brownsville, Brooklyn, and could not get him out of my mind. Hicks occupied a special place in the history of the gangs of New York. You could say he was its prehistory – the Cain of the city’s underworld.

Rich Cohen will be a featured speaker at the Union for Reform Judaism (URJ) Biennial, the largest Jewish gathering in North America, held December 11-15, 2019, in Chicago, IL. Register now or watch select sessions online to join thousands of Jews from around the world to learn, pray, share ideas, dance and sing, hear from inspiring speakers, reunite with old friends, create new connections, and more.

Tune In to This New Podcast About Israel!

10 Tips from the Spielberg of Purim-Spiels

In Praise of Wandering Jews

10 Tips from the Spielberg of Purim-Spiels
Feb 11, 2020|Aron Hirt-Manheimer

Tune In to This New Podcast About Israel!
Feb 17, 2020|Kate Bigam Kaput

An Introvert's Guide to Purim

How to Enjoy a Sometimes-Overwhelming Holiday