Closing the Generation Gap in the Longevity Revolution

Closing the Generation Gap in the Longevity Revolution

A Conversation with Author Marc Freedman 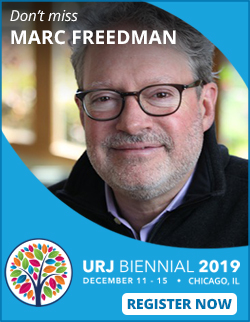 Marc Freedman is president and CEO of Encore.org, an innovation hub that taps the talent of people over 50 as a force for good. He is the author of five books, including most recently, How to Live Forever: The Enduring Power of Connecting the Generations.

Named a Social Entrepreneur of the Year by the World Economic Forum, he co-founded Experience Corps to mobilize people over 50 to improve the prospects of low-income elementary school students, and the Purpose Prize, an annual award for social innovators in the second half of life. I sat down with him to talk about the social implications of our aging population.

ReformJudaism.org: What does the longevity revolution portend for American society?

Marc Freedman: For the first time in American history, we have more people over 60 than under 18. That’s a shock to the system for a country that’s long considered itself a bastion of youth and youthfulness.

There are benefits to organizing society in this manner, but the downside is that it fuels ageism and the perceived sense of an inherent conflict between young and old “kids vs. canes.”

The turning point came in the 1950s and 1960s, when entrepreneurs, seizing on the rejection of older people in society, created America’s first age-segregated retirement communities; coined the “golden years” as ideal; and redefined success in later life as having a second youth – “graying as playing.” A key ingredient in perpetuating this fantasy of enduring youth was banishing actual youth through age segregation. If everyone was old, then no one was old!

Ironically, the first such community, aptly named Youngtown, was established in Arizona by “Big Ben” Schleifer, a Jewish immigrant who dreamed of creating a kind of kibbutz for older people, away from the unwelcoming outside world.

You have made closing the generation gap your life’s calling. Who were some of the caring adults or mentors who influenced you along the way?

First among them was Gil Stott, a kindly college dean whom I visited regularly to ask for “incompletes” in courses I’d failed to finish. He became like a surrogate grandparent, a magnificent mentor, and a true friend.

Another was the late John Gardner, who won the Presidential Medal of Freedom in 1964 and then went on to do his best work as an architect of Lyndon Johnson’s Great Society and founder of Common Cause. I met John when he was in his late 70s, and together we founded Experience Corps and Encore.org.

What do young and old people need most from each another?

To develop into thriving adults, young people need love and emotional support from older people who care deeply about them. Older people need a sense of purpose and deep connections. Intergenerational relationships are mutually-beneficial – and they couldn’t be more timely: older and younger people are the two loneliest groups in our society.

What are some of the creative alternatives to age-segregated living?

One is Judson Manor, a continuing-care retirement community located near the campus of Case Western Reserve University in Cleveland, OH. It provides free rent to graduate music students in return for which the students play concerts for residents.

An idea born of efficiency soon evolved into something much more as close relationships developed between younger and older residents. To cite one example, when a young violist living at Judson became engaged to another young violist, the couple asked their 90-something neighbor, Karla, to be part of the wedding party.

Another compelling alternative to age-segregated living is Chai Village in West Los Angeles, CA, a collaboration of Temple Emanuel in Beverly Hills and Temple Isaiah, also in Los Angeles, that was launched several years ago by Rabbi Laura Geller and her late husband, Richard Siegel.

In choosing the title How To Live Forever, are you playing on the fountain of youth myth while taking a jab at the lucrative aging-denial industry?

Many of the biggest names in technology are spending billions in an effort to radically extend the human lifespan. But their efforts are wrong-headed (not to mention narcissistic). The real fountain of youth is found in the same place it’s always been – by connecting with, supporting, and nurturing younger generations. You could say the real fountain of youth is the fountain with youth.

Marc Freedman will be a featured speaker at the Union for Reform Judaism (URJ) Biennial, the largest Jewish gathering in North America, to be held from December 11-15, 2019, in Chicago, IL. Register now to join thousands of Jews from around the world to learn, pray, share ideas, dance and sing, hear from inspiring speakers, reunite with old friends, create new connections, and more.

Who Is @RogueShul? We Chat with the "Jewish Viral" Account Creators

Who Is @RogueShul? We Chat with the "Jewish Viral" Account Creators
Jan 13, 2020|Kate Bigam Kaput