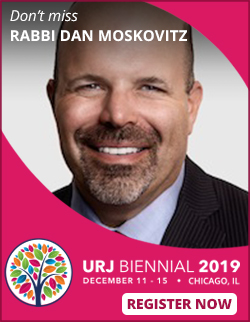 Rabbi Dan Moskovitz is the senior rabbi at Temple Sholom in Vancouver, BC, and chair of Reform Rabbis of Canada. He previously served as associate rabbi at Temple Judea in Tarzana, California. Rabbi Moskovitz is the author of numerous articles and publications, including The Men’s Seder (MRJ Press). I sat down with him to talk about his life’s journey and how his experience and insights are expressed in his latest High Holiday sermons and in his Ten Minutes of Torah commentaries.

What was it like growing up Jewish in the Bay Area of California?

My dad was president of a Reform temple and vice president of a Conservative synagogue at the same time, while my mom taught confirmation at the temple and was director of education at the synagogue. My maternal grandmother was the first conversion tutor in San Francisco, before there were Introduction to Judaism classes, and my grandfather, who owned a liquor store, was a bar mitzvah tutor.

From the time I was 6 or 7 until my own bar mitzvah, we belonged to both of those congregations, but we also spent most every Shabbat in Berkeley with the Chabad rabbi, Josef Langer, who had become a close friend of my parents. So I grew up a bit of a Jewish mutt – Reform, Conservative and Chabad.

What led to your decision to become a rabbi?

I attended a month-long BBYO program at a summer camp, where I met a Reconstructionist rabbi named Bruce Aft, who was also a semi-pro baseball player. I was not enjoying the program but really liked baseball. He got wind of that and invited me to play catch with him every day after lunch. So, I started asking him what it's like to be a rabbi and learned that rabbis make a difference in people’s lives – just as he was making a difference in mine.

In your commentary on Lech L’cha (Gen. 12:1-2), you interpret God’s commanding Avram to leave his father’s house as a call to “find yourself.” Is that how you view your own journey to the rabbinate?

Yes. Each of us is called upon to find purpose in life and to be our true selves; I think my purpose is to help people find theirs. The voice of conscience challenges us to ask ourselves: Is this who I am meant to be? Is this the purpose for which I was created?

But it’s very hard to know who you really are in the midst of the moment. Only when you step out of it can you get a perspective on your own journey. That is something Judaism does very well; we mine each moment for meaning.

In your commentary on B’reishit, (Genesis 1:1−6:8), you ask whether the true paradise is the Garden of Eden, where no one ever dies and time is limitless, or outside the garden, where our days are numbered. Why do you think living east of Eden is a gift?

God expelled Adam and Eve from the garden not as punishment but as a blessing. If you have eternity, then there is no urgency for anything. With  unlimited tomorrows, everything can wait. On the other hand, accepting that we are going to die compels us to focus on living, on making every moment precious and not to be squandered.

What prompted you to preach on Kol Nidrei about loneliness?

It really came from observing that we have more interactions with our screens than with actual people. Technology that was created to improve human interaction has become a substitute for human interaction. I turned 49 this past summer, and no one outside my immediate family called me on my birthday. I got hundreds of text messages but almost no one picked up the phone.

I don’t think my experience is unique. We have thousands of friends on Facebook, yet so many have no one to talk to. The synagogue is a response to this pervasive feeling of loneliness.

The earth is not ours. We are its shomrei adamah (guardians). A midrash teaches that, “When God made Adam, the Creator walked him around the Garden of Eden and said: “See all My works, how beautiful they are. Take care that you do not destroy My world, for if you do, there will be no one left to mend it.”

The point is that even in paradise there are limits. There is forbidden fruit. Not everything we can do, we may do. Judaism sets sacred limits on human excesses.

What’s one difference between the Canadian and American Reform Jewish communities?

Canadian Reform Jews are not the majority of the Jewish population (as they are in the U.S.). Being a minority requires us to build consensus around Reform Jewish values to affect communal change – which is a very Canadian way to accomplish things.

What is your wish for Canadian Reform Jewry?

That we never stop being distinctly Canadian in our approach to Jewish communal life.

Rabbi Dan Moskovitz will be a featured speaker at the Union for Reform Judaism (URJ) Biennial, the largest Jewish gathering in North America, held December 11-15, 2019, in Chicago, IL. Register now or watch select sessions online to join thousands of Jews from around the world to learn, pray, share ideas, dance and sing, hear from inspiring speakers, reunite with old friends, create new connections, and more.

We Have a Moral Duty to Welcome the Stranger

Why Did Roosevelt Abandon Europe's Jews?

We Have a Moral Duty to Welcome the Stranger
Jan 28, 2020|Aron Hirt-Manheimer

Then the Eternal One said to Moses, "Go to Pharaoh. For I have hardened his heart and the hearts of his courtiers, in order that I may display these My signs among them." - Exodus 10:1