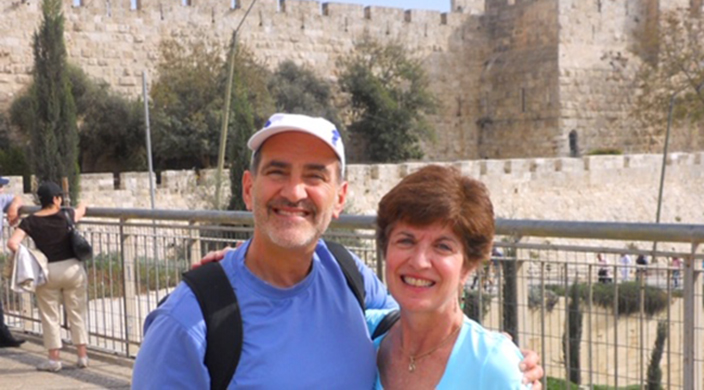 Perhaps it was presenting a tallit (prayer shawl) to our b’nei mitzvah-aged daughters overlooking the Dead Sea from the ancient fortress of Masada or feeling the spiritual peace of majestic Safed and Mount Meron; maybe it was the delicious cuisine and worldly smells of Jerusalem’s Mahane Yehuda market. Or could it have been the profound realization that we of Jewish faith can trace our roots back to that arid desert and the Promised Land, flowing with milk and honey, where we received the Torah from Mt Sinai?

Somewhere along our summer trip to Israel in June 2003 with our synagogue, Temple Beth Sholom in Miami Beach, FL, our lives were profoundly transformed. Our personal connection to the people, land, and state of Israel was immensely deepened. We came to love, understand and cherish our Jewish Israeli mishpacha (family) just as we love our Jewish-American mishpacha –  both in that same complex, sometimes bewildering, yet extraordinarily rich way.

In 2018, after 16 trips to Israel throughout the course of 15 years, we made a monumental decision to become citizens of Israel. That summer, we boarded an El Al charter flight from JFK with 102 Jewish North American adults, plus 130 children and landed in our Jewish homeland as olim hadashim (new immigrants), dual Israeli-American citizens splitting our time between Miami, FL, and Safed in Northern Israel. This past September, with a sense of historic responsibility and deep gratitude, we traveled to Safed to vote as Israeli citizens.

Our trips have helped us identify the many ways our Israeli family is different from our Jewish American family.

Israeli Jews are a beautiful mosaic of the world’s Jewry, and even secular Israelis are very “religiously knowledgeable.” After all, they live in a country that observes all the Jewish holidays; Hebrew is their first language; and they actually live in the biblical land of Israel.

And Israeli Jews live with a genuine daily threat to their existence. Most count family and friends among the 24,000 who have died establishing and defending Israel. Their children serve in the army, and adults continue in active reserve. Israelis have voted time and again for peace and for the parties they believe will best protect them. For our Israeli mishpacha, it is about security first.

So how can North American Jews show support and love for Israel – even if they cannot vote as Israeli dual citizens? Here are seven ways:

You can help Reform Jews increase political clout in Israel by participating in the 2020 World Zionist Congress (WZC) election in January 2020. These elections are held only every five years, and your vote for the ARZA slate will give the liberal Jewish community in Israel the opportunity to receive significant funds for Reform institutions and programs. You can also help mobilize others in your community to participate.

The more you know, the more empowered you will be to act as a knowledgeable, vigilant, passionate defender of our beloved Israel and world Jewry. Read and/or subscribe to news outlets such as The Jerusalem Post, Haaretz, and The Times of Israel. Participate in Israel programs, take a class about Israel, and learn some Hebrew. Support a cause you care about in Israel. (For example, as a family, we direct our giving to the Bar Ilan University School of Medicine in Safed to improve health care services in Northern Israel.)

Come see our Jewish homeland for yourself and share it with family and friends. It’s an extraordinary way to deepen your understanding and connection with Israel and with your synagogue.

4. Help our young adults become proud, confident advocates for our Jewish faith and our Jewish state.

Send your teens on one of the Union for Reform Judaism’s Israel programs, giving them an unforgettable summer in Israel or a semester abroad; encourage young adults ages 18 and over to go on a Birthright Israel trip. For more ideas, check out this list of work, volunteer, and travel opportunities for Jewish college students.

For Jews in so many countries where antisemitism is on the rise, Israel remains a safe haven for world Jewry. If you live in the United States, work to strengthen our bipartisan Congressional support for a strong Israeli-American relationship by joining organizations that support Israel and advocate on behalf of the country.

6. Help your synagogue partner with an Israeli Reform synagogue.

The Domim-aLike project helps bridge the growing gap between Israel and the Reform Movement in the Diaspora by creating and overseeing a map of partnerships between Israeli and world Reform congregations. Its goal is to strengthen the relations between Reform leaders in Israel and around the world. Here are other ways your congregation can show support for Israel.

Make a financial gift to the Israel Movement for Reform and Progressive Judaism (IMPJ), the umbrella organization of all Reform communities and institutions in Israel.

Looking for more about Israel? Sign up for "Israel Connections," a weekly essay – part of the Ten Minutes of Torah series – that offers a taste of life in Israel emailed to your inbox every Wednesday. Better yet, check out all the ReformJudaism.org newsletter choices, and sign up for the ones that interest you the most!

Karen and Marc Rivo are members of Temple Beth Sholom in Miami Beach, FL, where Karen is the immediate past president. She serves on the North American Board of the Union for Reform Judaism and the Israel and Reform Zionist Committee.

END_OF_DOCUMENT_TOKEN_TO_BE_REPLACED

The COVID-19 pandemic has shifted so much of how we engage Jewishly, but Shavuot is a fantastic holiday for families to celebrate from the safety of their homes. Here are a few ways you and your family can observe this rich, festive Jewish holiday this year.
Torah Study
Image