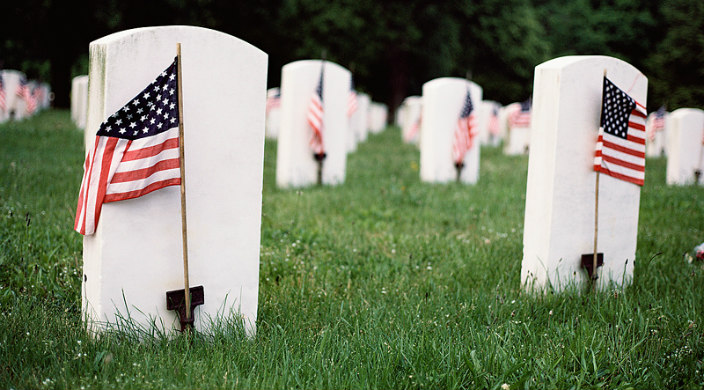 Although Memorial Day is not a Jewish holiday, the idea of remembering and honoring those who died in service to our nation is certainly a Jewish value. With that idea in mind, we’ve rounded up these stories and prayers to share with you ahead of the long holiday weekend.

Including both ancient and contemporary texts, this compilation of prayers and readings offers a selection to enrich your holiday observance.

How many Jewish members of the military have been buried under grave markers that incorrectly represent their religion and heritage? Operation Benjamin is doing its best to find and reverse such errors.

4. "Hatred and Bigotry Have No Place in 'The Purest Democracy'"

Rabbi Dan Bronstein, Ph.D., writes about Rabbi Roland B. Gittelsohn, who, as a chaplain for the United States Marine Corps, delivered what became an historic eulogy, following Iwo Jima, one of the most devastating battles of World War II.

Rabbi Douglas Kohn reconsiders his own patriotism and relationship with the military in today’s America – and helps readers use a Jewish lens to do the same.

Mike Rankin, z”l, a military physician, shares his remembrances of a Kol NidreKol Nidreכָּל נִדְרֵי"All Vows;" prayer recited on the eve of Yom Kippur, the holiest day on the Jewish calendar; service aboard a destroyer following a battle with the North Vietnamese Army that resulted in many deaths.

Alan Weinschel recounts how a trip to the American Cemetery at Omaha Beach reminded him of his responsibility – and ours – to remember these fallen soldiers by saying Kaddish for them annually.

8. "From Battle to Metaphor: The Meaning of Waterloo in Modern Jewish History"

Rabbi Lance J. Sussman, Ph.D. writes about what connects the Battle of Waterloo – which took the lives of 26,000 souls in one day – and Reform Judaism.

May those we remember on this Memorial Day rest in peace and may we, taking to heart the teaching of the Prophet Isaiah, continue the sacred task of beating our swords into plowshares and our spears into pruning hooks.

END_OF_DOCUMENT_TOKEN_TO_BE_REPLACED

Even though Halloween began as a pagan holiday, it now brings spooky fun to children and adults of all backgrounds, including many Jews who view it more as a traditional holiday than a religious holiday.
Education
Image

Lifelong learning, however, can be easier said than done. For many, as they enter adulthood, with its competing demands and obligations, setting aside time for learning – and especially for Jewish learning – can be challenging indeed.
Secular Holidays
Image