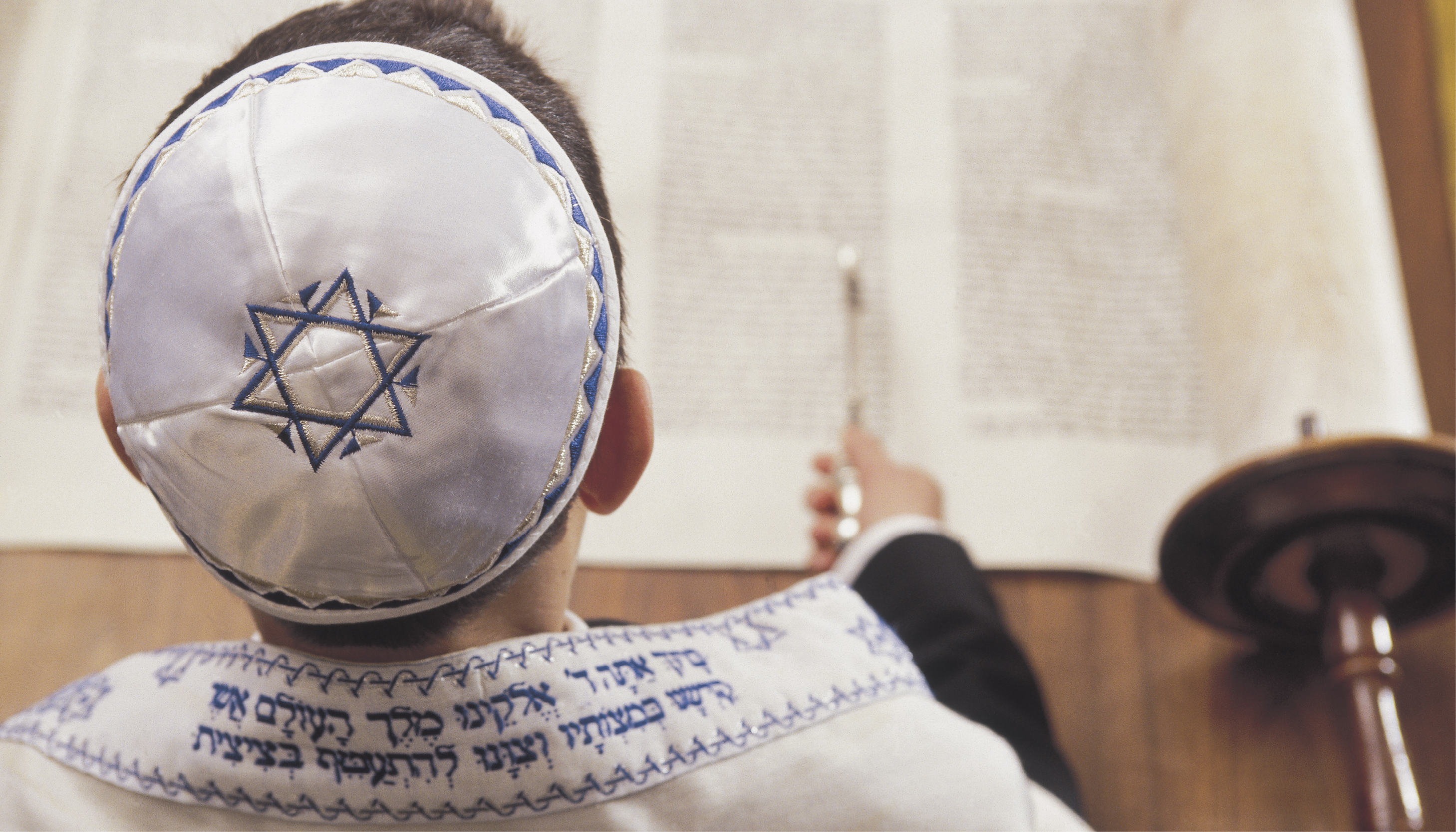 Like most parents, from the time we gave birth to our son, we had many hopes and dreams for him. We wanted him to have a good education, have friends and grow up to live a happy and prosperous life. We also had dreams of our child being brought up in the Jewish religion, and we hoped our child would embrace all that Judaism has to offer. Of course, we had hoped that he would pass some part of ourselves, including our Jewish heritage, to his children. It wasn’t long after Benjamin Avi was born, however, that we knew that many of those dreams would never come to be.

Benjamin Avi was born with a rare, genetic disease called mitochondrial myopathy. It is not one of the genetic diseases typically associated with the Jewish people. This one affects people of all races and cultural backgrounds. Mitochondrial myopathy has caused Benjamin’s cells to not produce enough energy for his body to function as most people’s do. As a result, Benjamin cannot walk, cannot talk and has poor fine motor skills. He cannot chew or digest food properly, and he is considered legally blind. He has seizures, a feeding tube and has been diagnosed with moderate mental retardation, an intellectual disability that still leaves us questioning what he understands and what he does not. Although the effects of mitochondrial diseases vary greatly between victims, the one commonality seems to be a shortened life expectancy, although medical science cannot predict that very well. There is currently no cure for mitochondrial myopathy or any of the many other mitochondrial diseases.

It is with this backdrop that we embarked on a journey to keep Benjamin healthy, and to help him lead a happy, fulfilling and meaningful life. Part of this journey included bringing Benjamin up as a Jewish child. From the time Benjamin was a tiny infant, we took him with us to Friday night Shabbat services at The Temple in Atlanta, Georgia. When we were at home or driving in the car, we all listened to Hebrew music by Debbie Friedman, Craig Taubman and a host of other musicians. To this day, Benjamin’s favorite music selections are those sung in Hebrew. Benjamin loves Hebrew music so much that, when he was in sixth grade in public school, the speech therapist used Craig Taubman’s Friday Night Live CD to encourage him to communicate.

While we knew we could send Benjamin to a non-denominational Sunday school for Jewish children with disabilities in Atlanta, we very much wanted Benjamin to attend religious school in an inclusive environment with the other children his age. In 2002, there didn’t seem to be very many special needs children attending religious schools in inclusive environments, so we turned to the URJ for guidance. They talked with us, and they sent us a book entitled Al Pi Darco: According to Their Ways. After reading that book, we were encouraged to pursue a Jewish education for our child in the regular religious school. So, we decided to enroll Benjamin in the Temple Bremen Religious School when he was 4 years old.

For the first year of religious school, pre-kindergarten, one of us (Benjamin’s parents) stayed in the classroom and served as Benjamin’s aide. For kindergarten, an adult with an education background served as Benjamin’s aide. By the time Benjamin got to first grade, however, Benjamin was assigned to his first teenager who would help him in the classroom. Michelle Maloney became the first of, thus far, seven teen tzadikim. She would serve in that role for two years until she left for college. Ever since then, Benjamin has had one teenager assigned to be with him in the religious school classroom each year. Coincidentally, Michelle also served as Benjamin’s group counselor for several years at the day camp at the Marcus Jewish Community Center in Atlanta. (She is now grown, and works as a special education teacher in a Georgia public school.)

As the years went by, Benjamin seemed to enjoy going to Friday night services, attending Jewish day camp in the summer, listening to Jewish music and celebrating the Jewish holidays, especially Chanukah and Passover. Yet, we still thought about and yearned for the day that Benjamin would have a bar mitzvah.

Now that years were passing and Benjamin was not physically or mentally developing as we had hoped, we wondered how he could possibly have a bar mitzvah. Oh, yes, we were told many times that a boy simply becomes a bar mitzvah just by turning 13 years old. However, we did not want Benjamin to become a bar mitzvah merely by turning 13 years old. We wanted him to have what many other Jewish boys have when they turn 13. We wanted him to have a ceremony where he would be called to the Torah.

At some point, we had to let go of our picture of what a bar mitzvah looks like and of what we might imagine Benjamin’s bar mitzvah would look like. With the unwavering support of Rabbi Rau, the Director of Education at The Temple, Rabbis Berg, Reeves and Lapidus, and Cantor Numark, Benjamin’s Bar Mitzvah service began to take form and shape.

It was decided that the beautiful historic sanctuary would be used for the service, but its bimah was too high for a wheelchair ramp. So, The Temple created a small, low bimah using a riser connected to a ramp that a Temple member built for the event. The date chosen would be on Shabbat Noach, ten months after Benjamin turned 13, so that two hundred fifty Reform Jewish teenagers from around the Southeastern United States could witness this special event when they would be in Atlanta. The part of the Torah that would be read would be about the rainbow, a symbol that has been used around the world by all religions to mean inclusion of all people.

Two of Benjamin’s religious school classmates, Ben Furman and Elliott Williams, volunteered to read from the Torah for him. Benjamin’s mom would read the part for which Benjamin would have his aliyah. Benjamin would use an electronic communication device with eight buttons, loaned to him by Gwinnett County Public Schools, to say the blessings before and after the Torah was read. Other aliyahs would be made by Benjamin’s doctors and by some of the Temple staff who had become like family. After the service, there would be a dessert Oneg that would consist of baked goods brought by Temple members, enough to feed over five hundred people and have plenty left over.

When October 28, 2011 came, we brought Benjamin to The Temple in his new gray suit, with his new purple tie. When the service began, Rabbi Berg wrapped Benjamin in the beautiful rainbow tallit that the clergy gave him as a gift. Benjamin had come into the sanctuary already wearing the matching kippah. In his parents’ eyes, no other bar mitzvah boy could ever have been as handsome. When Cantor Numark began to sing, Benjamin began to rock back and forth. When it was time for Benjamin to lead the congregation in prayer, his current religious school aide, Abby Bocenic, helped him push the buttons on the communication device. As the buttons were pushed, the pre-recorded voice of teenager Ben Hirsch sounded through the speaker system in the sanctuary. Our son was becoming a bar mitzvah.

When it was time for the reading of the Torah, the actual Torah was passed down from family member to family member until finally into the arms of Benjamin’s dad. Then, a miniature Torah was placed into Benjamin’s lap. With Rabbi Berg carrying the Torah and Benjamin being pushed in his wheelchair as he carried the miniature Torah in his lap, we all participated in the processional around the sanctuary. As one long-time Temple congregant had put it, she had never seen the congregation so joyous.

After the reading of the Torah portions and after Benjamin completed his aliyah, the congregation sang Simintov and Mazel Tov and then sang a modified version of The Sabbath Prayer from Fiddler on the Roof. (May you have good friends who’ll stand by you. May you always have a good home. Strengthen him, oh Lord, and never let him feel alone.) At the end of the service, the entire clergy, now joined by our beloved Rabbi Emeritus Alvin Sugarman, put their hands on Benjamin and gave him the Yevarechecha blessing. As noted by Judy Cole, our amazing pianist who played the incredibly beautiful music throughout the service, that was the time that just about everyone in the congregation cried.

God called upon hundreds of people over the course of thirteen years. He had a very special task he needed each of them to do for a special child. When called upon, each one without question said “Hineni. Here I am.”

When all the planning, building and preparing was complete, God’s special child was called to the Torah. And all the people rejoiced. And God saw that it was good.

It took hundreds of people and one very special child. There can be no doubt that God’s voice came through loud and clear that night. It was then that God said to all of us “Hineni. Here I am.”

And we all know in our hearts, in our minds and in our souls, that what we did was good.

Paula Krone is a member of The Temple in Atlanta, Georgia.

Michael Faber is a member of The Temple in Atlanta, Georgia.