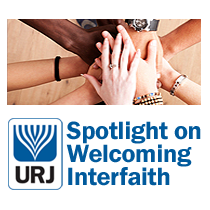 “So, how many children do you want?”  Not an unusual question for a man to ask his girlfriend when he is beginning to think about a future with her.  However, when I heard this question, it came from the cute, industrious Israeli I had been dating for about six months and I actually laughed.  “You mean grandchildren, right?”  You see, at 38, I had been a single parent for 18 years, and I was looking forward to the next phase of my life.   But, as we continued to talk, I started to think that parenting with a man who was a loving and committed father might be an experience I'd enjoy.  And, I'll have to admit, I was more than a little in love with this guy. So, our conversations moved from “how many children” to “what faith”.

I had spent my entire life seeking a faith that met my spiritual needs and had not yet found that answer.  I had been reared in a fundamental Baptist church but had never felt at home in this faith.  As a young adult I explored many different options:  Pentecostal, Catholicism, Methodist, and Unitarianism, just to name a few.   So, my response to the questions “Which faith” was, “I want a strong spiritual core for our family.  If that is easier for you through Judaism, then I do my best to make a Jewish home for our family.” How naïve I was.  My husband had no family in Baltimore and I had almost no knowledge of Jewish customs or traditions.   I actually spend the first several years of our marriage in tears when Christmas or Easter came around.  I had not expected to feel such a loss by not embracing these holidays.  I needed to feel a part of this new faith I'd chosen for our home.  My husband tried to help.  I remember his efforts to surprise me by taking me to a Purim service at a traditional orthodox shul where I sat on the “woman's” side hearing almost no English.  The women were polite, but we had almost nothing in common.  I may have never felt at home with the faith of my youth, but now I felt totally out of place. However, I'd made a commitment to raise our children Jewish, so when it was time for our son to attend preschool, I asked my husband to help us find a Jewish school.  He found a preschool that was not affiliated with a congregation, but which supported traditional Jewish values.  Soon, my 4 year old began each morning with, “Emma, don't forget my tzitzit and yarmulke”.  And, during our meals, he'd tell me that I should not put cheese on my hamburger.   My husband would explain that mommy was not Jewish and therefore did not have to follow these laws, but now I was an outsider in my own home.  There had to be a better way. When it was time to choose a kindergarten, my “outsideness” became more apparent because the schools being considered by our son's schoolmates would not accept us.  One day I saw a sign in front Baltimore Hebrew Congregation that said “Day School and Religious School”.   I asked my husband, “I wonder if they have a better way?” We contacted their Day School and set-up an interview.  “You know, I'm not Jewish”, was one of my 1st comments.  Their response was “Many of our mom's are not Jewish.  You'll find lots of friends here”.  And, they were right. I found a community where I was not just accepted, but embraced – a community where I did not have to give up who I was – a school able to provide our son a wonderful education integrated with strong reform Jewish values – a school family willing to take me from my childlike desire to understand this culture to a more mature understanding of the Jewish faith and traditions.  I found a home away from home where l'dor v'dor included both my Appalachian Christian family and my husband’s Iraqi ancestors. Suddenly, there was an extended Day School family who made sure that we were invited to Shabbat dinners, Passover Seders, and Chanukah parties.  Like a family, they seemed to actually enjoy my childlike enthusiasm to learn the hows and whys of Jewish traditions.  Like a family, they cried with me when my father died.  They were there to celebrate our son's bar mitzvah and to make sure my Christian family members were embraced and welcomed, just as I had been 7 years earlier. In addition, I found clergy and leadership at Baltimore Hebrew who were willing to help me understand this wonderful faith in a manner that never made me feel that Christianity was wrong or in any way “less” than Judaism.  They helped me understand that there was nothing wrong “sharing” my family’s holidays and helped me find the best ways to encourage my extended family to share ours. Because of the care, love, and understanding we received, we finally were able to create a “spiritual core” that blended my husband’s Sephardic traditions and the many Jewish traditions I learned from other families, with some of my non-Jewish traditions.   I no longer felt that I was an “outsider” teaching our son about his father's faith.  Now I belonged. By the time our son was ready to graduate from the Day School at Baltimore Hebrew, I realized that I actually had been living my life as a Jew for several years.  I had been fully embraced by Baltimore Hebrew Congregation and the Day School.  I served on the congregational board as well as on the Day School board.  I realized that I had found that spiritual home I had been seeking for over 50 years. Thankfully, Rabbi Perlmeter, the senior rabbi of Baltimore Hebrew Congregation, our Day School spiritual mentor, and my teacher, also sensed that I had found what I'd been seeking and continued to nudge me in that direction.  Although Jews do not seek to convert or proselytize, those of us who were raised in Christian traditions are used to being asked to join.

I was so fortunate to have a Rabbi that realized that, when the time is right, a gentle question “Should we talk?” can be the ultimate communal embrace that, in my case, resulted in conversion. Rabbi Perlmeter taught me about our Talmudic Midrash which teaches that that all Jewish souls ever destined to exist were present at the giving of the Torah at Mount Sinai.  I feel certain that I was born with a Jewish soul that has been seeking Sinai for many years.   My story gives evidence to the fact that a warm embracing community, like the Day School at Baltimore Hebrew, can help those souls find their way home.