A Blanket, a Letter, a Shoe: Searching for Meaning in Traces of the Holocaust 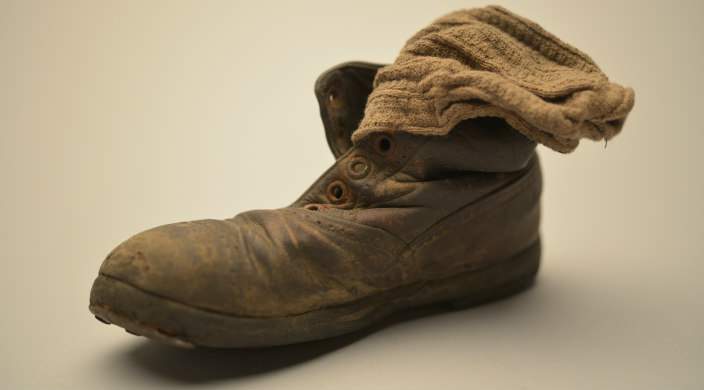 The artifacts displayed in “Auschwitz. Not long ago. Not far away.,” a major new exhibition opening at the Museum of Jewish Heritage – A Living Memorial to the Holocaust in New York City on May 8, are traces of genocide, the remnants of a murdered people, and the material evidence of crimes against humanity. They are what remain, despite the perpetrators’ attempts to conceal their crimes.

Some are seemingly ordinary things.

To most of us, a blanket is associated with a warm, comfortable bed. But it takes on a radically different meaning in the story of Auschwitz. There, a bed was a hard, three- or four-tiered wooden bunk, a place where human beings lay their broken bodies after days of backbreaking and brutal work. It was a space shared with the dying and the dead. And in winter, these thin blankets were all the exhausted prisoners had to guard against a cold so severe they could not get warm.

Tens of thousands of such blankets were distributed in Auschwitz, and each anonymous, mass-produced one speaks to the suffering of countless prisoners.

But the blanket in this exhibition, while indistinguishable from the others, has its own unique story.

It is a tangible artifact that connects us to 24-year-old Jewish tailor, Siegfried Fedrid, who grabbed this blanket in January 1945, as he and 60,000 other prisoners were evacuated from Auschwitz. It was this blanket that Fedrid wrapped around himself on the bitterly cold nights of the death march, when thousands of prisoners perished from exhaustion and exposure. And it was this blanket that Fedrid chose to share with four others, who huddled together with him against the cold.

Instead of thinking only of self-preservation, in this act Fedrid showed a generosity that saved not only the lives of these men, but also, perhaps, our own faith in human nature.

Each object, then, can tell many stories and can reveal many different issues, questions, and meanings.

The cattle car, which has become a symbol of the Holocaust, conveys the horror of deportation to the death camps: men, women, and children crowded into a rough wooden wagon for days and nights at a time, with no room to sit down, no food, and just one bucket for water and another for a toilet.

A letter cast from one of these freight wagons reminds us that those crammed inside were not a faceless mass, but individuals with lives and loves, hopes and dreams.

Seventeen-year-old Hertha Aussen wrote a message on a scrap of paper addressed to Netty Rènes and threw it from a train leaving the Westerbork camp in the Netherlands, heading for Auschwitz:

Briefly a few words. Most likely this will be the last card you’ll receive from me. I hope you will all be fine. We’re brave and keep our spirits up. For the rest: many warm greetings and kisses. See you again in Gorssel.

This note is the last trace of Hertha Aussen. The last mark she made on this world was that of her pen on this paper – a reaching out to wish her friend well, to say goodbye, not to completely disappear.

The personal items that deportees carried with them were plundered, and the trains returned from the camps laden with the belongings of murdered people to be sold and reused. Clothing, spectacles, wristwatches, jewelry, hairbrushes, cutlery, pots and pans – everything that people brought with them to Auschwitz was deemed to be of some value. Except, of course, their lives.

And so, in the world of Auschwitz, a little shoe was deemed to be of more worth than the child who wore it. The shoe was kept and the child – perhaps a boy of three or four years old – was murdered. He tucked his little sock into his shoe as he undressed for what he was told was a shower, and then entered the gas chamber.

We do not know this child’s name or where he came from. But perhaps we can sense something of what we lost in Auschwitz. What life would this child have led, had he lived? Who would he have loved, what lives would he have touched, what things would he have done?

“Auschwitz: Not long ago. Not far away.” will be on view at the Museum of Jewish Heritage – A Living Memorial to the Holocaust in New York City through August 30, 2020. For additional information, visit Auschwitz.nyc.

Paul Salmons is a Holocaust educator, writer, and curator of the exhibition Auschwitz. Not long ago. Not far away. This article was adapted with permission from the book accompanying the exhibition, From Auschwitz. Not long ago. Not far away., edited by Robert Jan van Pelt with Miriam Greenbaum and Luis Ferreiro (New York: Abbeville Press, 2019). The catalogue of the exhibition is available at the Museum of Jewish Heritage – A Living Memorial to the Holocaust in New York. Email Paul Salmons.