From the Borscht Belt to Broad City: Pushing the Limits of Comedy 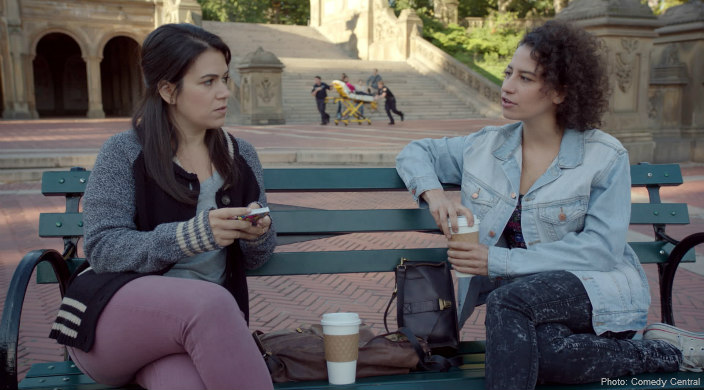 Naming their characters after themselves, Abbi and Ilana literally wear their Jewishness on their sleeves; the season three premiere features Abbi wearing a T-shirt that reads “Challah Back.” In an interview with The Forward, Glazer says, “I think growing up in New York City…makes you a double Jew, and comedy makes you triple.”

Though some episodes include traditional Jewish scenes, like sitting shiva (community of mourners) and fasting on Yom Kippur, the Jewishness of the creators is one of the show’s defining characteristics.

Much of the show’s humor involves sexual situations that push past cultural taboos. The third season’s premiere opens with a split-screen montage of Abbi’s and Illana’s bathrooms and everything that takes place in them over the course of several months. There’s the literal potty humor, shaving and plucking, bong ripping, and lots of what some would consider perverse sexual acts.

In the Forward interview, Abbi is asked, “Is there some cosmic lesson about people your age we should know about?” She responds, “In the opening of the show where Ilana is video chatting with Abbi and is having sex at the same time, I think that shows that Ilana isn’t afraid to show literally her full self to anyone. She is not afraid of who she is.”

Jacobson and Glazer are continuing a long tradition of Jewish comedy that uses vulgarity to push the envelope and challenge societal norms, doing so unabashedly as themselves in front of millions of television viewers.

Between the 1920s and 1970s, that tradition flourished in the “Borsch Belt” – the Jewish resort hotels in the Catskills region of New York. There, comedians like Melvin Kaminsky (Mel Brooks), Joan Molinsky (Joan Rivers), Leonard Hacker (Buddy Hackett), and Allan Konigsberg (Woody Allen) honed their routines among their own before eventually venturing out into the American mainstream – nightclubs, casinos, movies, and television.

Of the two dominant strains of Jewish comedy – self-deprecation and vulgarity – Woody Allen epitomized the former, playing what blogger Menachem Feurer calls the “sexual schlemiel” – a “self-deprecating, non-masculine,” yet charming male. Playing the jester is an ancient ploy among the powerless seeking inclusion in a hostile environment, but they were skilled at not stepping over the line.

Stand-up comic Leonard Schneider (Lenny Bruce) integrated satire, politics, religion, sex, and vulgarity, turning self-deprecation on its head in defending his people against the charge of deicide: “A lot of people say to me, ‘Why did you kill Christ?’ I dunno. It was one of those parties, got out of hand, you know. We killed him because he didn’t want to become a doctor, that’s why we killed him.” Bruce, who dared to cross the line of what was considered indecent speech in the 1960s, was convicted for obscenity and posthumously pardoned after he died of a drug overdose. Comedy Central has ranked Bruce at number three on its list of the 100 Greatest Stand-Ups of All Time, just one spot above Woody Allen.

Joan Rivers, famous for self-deprecation and raunchiness alike, ranks 44th on the list and is a forbear of modern female comedians such as Sarah Silverman, Amy Schumer, and the creators of Broad City. Susan Horowitz writes in Queens of Comedy that, compared to female comedians before her, “Rivers [was] more realistic, intimate and directly connected to her own urban, ethnic experience... her strongest influence was Lenny Bruce, who stressed developing comedy out of one’s own personal pain and truth.”

It might be tempting to conclude that Jewish humor is now arguably simply American humor (no hiding Jewish names anymore), with no more boundaries to push – but Rivers’ comedic heirs are still finding new ways to stir up controversy.

Last year, the Parents Television Council, a conservative censorship advocacy group, named Broad City “The Worst Cable TV Show of the Week” for its “unbelievably graphic dialogue” and lamented why “there is so little for people who don’t enjoy pornography to watch.” On the other end of the political spectrum, Paste Magazine accused Broad City of being transphobic and homophobic for an episode that “pathologizes the idea that anyone could be sexually attracted to transgender people.” And in response to a recent episode of Broad City featuring Hilary Clinton, a Change.org petition demanded the show give “equal air time to the more progressive and millennial-favored Bernie Sanders.”

While the current media climate seems to have no limits as to what’s deemed acceptable, Broad City is proof that it’s still possible to provoke and challenge. Jacobson and Glazer, as comfortable with their Jewishness as they are with their sexuality, are part of a new wave of Jewish women who continue to test the limits of what’s permissible in popular American comedy.