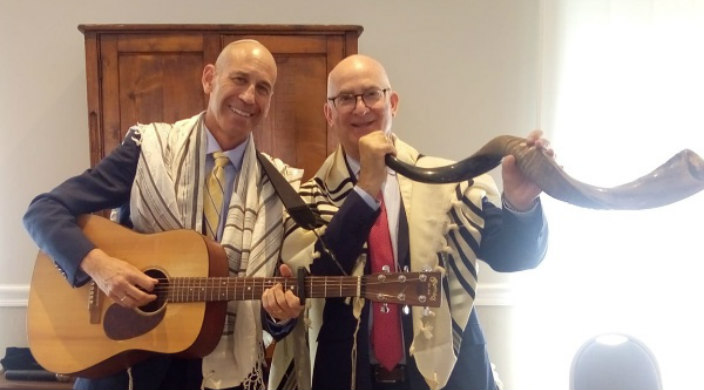 When people learn that my husband Don and I live in Jerusalem, invariably among the first questions they ask is about the High Holidays. “I’ve often dreamt of being there for Rosh HaShanah and Yom Kippur. What’s it like?”

I can’t tell you much about the High Holidays in Israel, actually. Although we made aliyahaliyahעֲלִיָּה"Going up." The honor of being called to recite the blessings before and after the Torah reading. Also refers to immigration to Israel, to "make aliyah" to Israel; plural: aliyot. Lit. "Ascent."  six years ago, we’ve only spent one Yamim Nora-im (Days of Awe) in Jerusalem. And I don’t recall much about those holidays except that Yom Kippur was possibly the hottest day of that year. After beautiful t’filaht'filahתִּפְלָה"Prayer." in the morning at Hebrew Union College-Jewish Institute of Religion, we returned to our apartment for a short nap – with the air conditioning on full blast. Hours later, we realized we had slept through most of the afternoon prayers and walked to the Jerusalem Great Synagogue for N’ilahN'ilahנְעִילָהLiterally, “locking.” The service that concludes Yom Kippur. The name alludes to the metaphorical locking of the heavenly gates at the end of the day. .

The next year – and every year since – we have served as the rabbi and cantor for the High Holidays at Beth Shalom Milano, an intimate Reform community in the center of Milan, Italy. When I studied modern Italian as an undergraduate, I never imagined I’d be putting those Italian nouns and verbs to good use, not only on the bimahbimahבִּימָהThe platform in the synagogue from which which worship services are led and from which the Torah is read. The bimah, usually raised, can be placed in the front or the middle of the sanctuary. , but also in the streets and shops of Milan. Although the Jewish community in Italy is one of the oldest in the world, it comprises only about 30,000 Jews, about 10,000 of whom live in Milan.

Our services, sung, chanted, and read in English, Hebrew, and Italian, are held in a conference room in a hotel adjacent to the Duomo Plaza. The small group of devoted congregants travel from throughout Italy to celebrate with the Beth Shalom community. One family comes from Verona, another from Switzerland, still another from Lake Como. For Jews around the world, the pull of these Days of Awe is powerful and in places like Italy, where the Jewish population is so sparse, that desire to be with community – to pray, sing, and reflect together with other Jews – is perhaps even stronger.

In the United States – especially in larger cities – the High Holidays have a formidable presence against the backdrop of secular life. On the morning of Yom Kippur in Los Angeles or New York, for example, a high percentage of American Jews will not go to work, traffic is a little lighter, and even the television news will broadcast a short segment on the holidays. In Milan, by contrast, few people outside the Jewish community have even the slightest idea of the significance of the day on the Jewish calendar.

The first year we were in Italy, the Kol NidreKol Nidreכָּל נִדְרֵי"All Vows;" prayer recited on the eve of Yom Kippur, the holiest day on the Jewish calendar;  service in Milan occurred at the same time as “Vogue’s Fashion Night Out,” a city wide event. The main stage was located directly in front of the Duomo, and we exited services amidst bands playing, klieg lights scanning the sky, models parading across the Plaza in the season’s best fashion, as waiters offered Prosecco, Campari, cheese, and prosciutto. There is possibly no greater contrast than the final strains of “Avinu Malkeinu”Avinu Malkeinuאָבִינוּ מַלְכֵּנוּ "Our Father, Our King"/"Our Parent, Our Ruler" A prayer (and song) chanted during the High Holiday period. Describes two simultaneous ways in which people might relate to God: the intimate relationship of a parent and the powerful awe of a ruler. resounding in my head as six-foot tall models in stiletto heels sashayed in front of the cathedral.

Although we spend only the High Holidays (and occasionally Passover) in Milan, we have developed relationships with most of the members of the Beth Shalom community. We’ve celebrated b’nei mitzvah, assisted in conversions, rejoiced with married couples on their wedding day. When I stand on the bimah and look out at the congregation, I see rows filled not only with faces, but with people who have stories and histories, dreams and hopes. I see a brilliant and varied palette that represents the complexity and diversity of the Jews of Italy.

Most recently, a couple we know from Milan renewed their vows in Tel Aviv. With the Mediterranean and the slowly setting sun in the background, the bride and groom exchanged vows and rings. Afterward, as we all toasted the radiant couple, conversation at the party was a wonderful mix of Italian, English, and Hebrew.

Here’s a secret about Milan: The community is great, the people are friendly, I love practicing my Italian, and (shhhh….) we go with half-empty suitcases and return with luggage chock-full. As the fashion capital of the world, Milan’s a great place to shop – for shoes, jackets, shirts, ties, and cheese. Quite a bit of cheese. Parmesan. Grana. More parmesan. Good balsamic vinegar, too. And, of course, more shoes. (Admittedly, have a thing for Italian shoes.)

Mostly, though, I return from Milan each year with incredible memories – memories of how a small group of dedicated Reform Jews in the center of one of the most beautiful cities in the world perseveres in creating a liberal Jewish community in a country in which Jews are a clear minority. After all, where else but Italy can “Avinu Malkeinu” be translated not only as “Our Father, Our King” but as the ever elegant “Nostro Padre, Nostro Rei?”

Wherever you are during the upcoming Days of Awe, may you feel the embrace of community, the closeness of loved ones, the hope and light of a New Year – and, of course, the comfort of a good pair of new shoes!

To find Reform, Progressive, and Liberal congregations in cities around the world – during the Days of Awe and throughout the year – connect with the World Union for Progressive Judaism (WUPJ) or download their app. If you’re looking for a congregation in North America, find a synagogue near you.