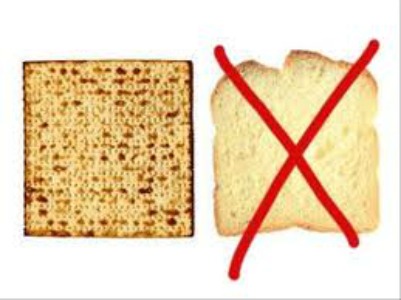 One of my dear friends and colleagues, Rabbi Phyllis Sommer, has for several years now challenged us to blog Exodus. She has come up with daily themes. Today's theme is chametz, usually translated to mean "leavened food." These foods are forbidden, according to Jewish law, to be consumed during the festival of Passover. We avoid chametz to remind us of how the Israelites had to flee Egypt so quickly that their bread did not have time to rise. Instead they consumed matzah, or unleavened bread.

Any foods that have been allowed "to rise" are off the menu for the festival of Passover. Being a community so closely tied to carbs, it is hard for many of us to give up our breads, cakes, cookies, and just about every other type of baked good. Chametz also includes any alcohol made from grains, which includes beer, whiskey (or whisky depending upon where you're from), scotch, etc.

And yet as Rabbi Sommer points out on her blog, because it is forbidden, we spend most of our time thinking about being able to enjoy chametz. A similar issue arises (pun intended) during Yom Kippur when we spend the day fasting. Of course much of the time is dedicated to thinking about our next meal.

This got me to thinking about the whole notion of gastronomic Judaism. Our tradition is heavily tied to foods, and not just forbidden foods. For example, during Chanukah, we eat foods fried in oil such as latkes (potato pancakes) and sufganiyot (Middle Eastern doughnuts). On Purim we eat a special cookie called a hamantaschen which has a triangular shape. There is an ongoing debate about the best kind of filling for a hamantaschen. Personally I would argue that it is apricot, and, once you accept this fact, there really is no debate.

Then there are the laws of kashrut which have to do with permitted and forbidden foods. And that is just for a start.

So the question I often get asked is why all of this focus on food? I have spent a lot of time thinking about it and have come to the conclusion that food represents a core part of the human experience. At some point, we have to eat in order to live. Also one of the central tenants of our tradition is from Leviticus 19:2:  "You shall be Holy, for I, the Eternal your God, am holy."

Although we are not inherently holy, our mission is to bring holiness into the world. And one way we can do that is to be more holy and more ethical in our food choices. Being limited at certain times and in certain ways with our food, especially in a society that has an overabundance and an unhealthy relationship with food, is a good thing.

So during Passover, I'll be grateful for the absence of chametz because not enjoying it reminds us of how we came to be a free people. At the same time, I also will very much enjoy pizza and beer when the festival is over. For it is holy to enjoy both the unleavened and the leavened, just not always at the same time.

#BlogExodus is a Passover blogging project that began on the first day of the Hebrew month of Nisan and will continue until Passover. It was started by Rabbi Phyllis Sommer, who encourages individuals to participate on their blogs and/or their Facebook, Twitter, and Instagram accounts. Learn more about how you can participate.