Commanded to Survive: Understanding Jewish Life Before and After the Shoah 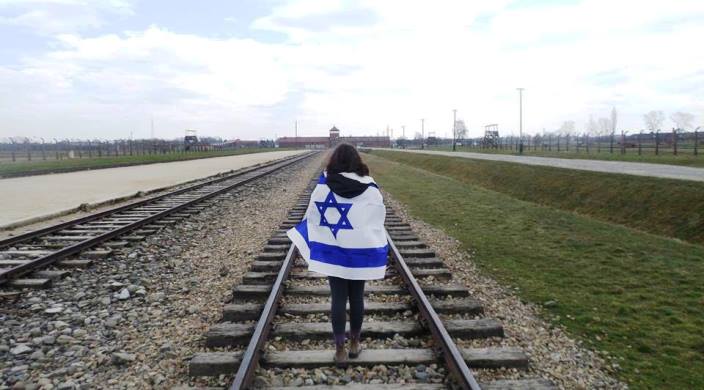 Before 1933, life for the Jews in Europe was filled with rich Jewish culture. Jews often lived in shtetls (small Jewish villages) or chose to assimilate into secular society. For the most part, life was good – until Adolf Hitler. Soon, they became victims of the Nazis, whose macabre mission was to exterminate the Jews and all others who did not fit their vision of a purified race.

I recently spent five days on a trip with NFTY-EIE, a Reform Jewish study-abroad program in Israel. We visited the sites and traced the paths where the Jews of Europe – including Poland, Czechoslovakia, Romania, Russia, France, Hungary, and Turkey – lived and died 80 years ago.

On our pilgrimage to Poland, we visited a shtetl known as Tykocin, where we learned about the once-lively Jewish community there. One survivor recalls, “The people of Tykocin were very proud of their Tykocinian heritage. When a Tykocinian would want to show off to someone from another town, he would say, ‘First and foremost, I am from Tykocin, and second I am…’” These Jews were proud of their village, their Judaism, and the community – rich in culture and religion – that they had created. The only religious part of Tykocin that survived the war was the synagogue, where prayers were written on the walls. I believe the Jews of Tykocin did this not only to beautify their place of worship but also so Jews could sing together rather than look down at prayer books. It is a practice I wish more synagogues today used.

Another story told by a Tykocinian Holocaust survivor further illustrates this strong sense of tightknit community:

"I especially remember the first Passover after my father died… My mother did not want to be a burden upon our neighbors and therefore declined the many invitations we had for the traditional seder evening….That night, the job of running the seder fell upon me, as the oldest…it was quiet in the house…I lifted up the glass of wine in my hand and looked at my mother. When our eyes met, I couldn’t control myself and burst into tears, followed by the entire family. Immediately, our neighbors came running into our house…they had been waiting outside because they anticipated that this is what would happen at our seder, and they then stayed with us throughout the night."

Sadly, the life of this vibrant Jewish community was cut short when the Nazis invaded Tykocin in August of 1941. They transported Jewish women and children in trucks to the Lopuchova forest, forcing the men to run behind, and made them sing “Hatikvah” – and then they killed nearly 2,000 villagers. The Nazis made local Poles dig three pits, into which they shot the Jews of Tykocin.

The Nazis’ command to make the villagers sing “Hatikvah,” now Israel’s national anthem, was a sick joke, but I find it ironic. We read the story of a survivor of the Tykocin massacre: The bullet missed her, and the dead bodies of her friends and family fell on top of her, which is how she lay still for hours before crawling out. Though hearing her personal account brought me deep sadness, her survival shows hatikvah, hope, for Am Yisrael, the people of Israel, simply because she stayed alive.

The story of the Shoah is one not only of murder and victimization, but also one of resistance. Through our study of the Holocaust, we learned that resistance can come in many forms. In some circumstances, merely surviving was a form of resistance, while dying by one’s own choice was another. In the Warsaw Ghetto Hospital, some doctors resisted Nazi directives by euthanizing patients in order to save them from the misery of ghetto life. It seems backward to me but beautiful at the same time, for dying in one’s sleep sounds better than being tortured, starving, or worse. Other Jews risked their lives for the sake of resistance, too, as we learned in the story of three Jewish spies who were able to pass as Aryan. Serving as couriers, these three girls were always on the go, smuggling illegal goods of all kinds and completing the most dangerous tasks.

These people faced the danger of being caught and killed for their resistance, but choose to act in spite of it. Why? As Jews, we are commanded to survive – to live. These acts of resistance continued the existence of Am Yisrael.

The famous rabbi Emil Fackenheim wrote, “Jews are forbidden to hand Hitler posthumous victories. They are commanded to survive as Jews, lest the Jewish People perish.” Throughout history, many people have tried to annihilate the Jews, but none have fully succeeded. Our survival as a people – an Am – explains both the importance of resistance, and how ingrained it is in Jewish culture. It explains the importance of tikvah, hope. It explains the importance of telling and remembering stories, of bringing younger generations together with survivors of the Holocaust.

Seeing the synagogues, cemeteries, factories, and concentration camps where other Jews passed through less than a century ago sent a shiver down my spine, but having the opportunity to visit Poland and learn the story of our people made me value my Judaism and the Jewish homeland all the more. As Jews, it is our responsibility to understand Jewish life before and after the Shoah. We must understand that the Jews who came before us are the reason we exist as an Am today – because they were nearly exterminated, we are all the more strong.

Maya Seckler is a high school sophomore. She is a member of Temple Shalom in Newton, MA, is active in NFTY-NE, and attends URJ Eisner Camp. She is a participant on NFTY-EIE, the Reform Movement’s high school study abroad program in Israel, and recently traveled to Poland with her classmates.