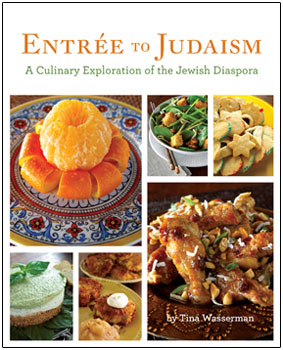 Many years ago I created a birthday cake for my son that covered an entire table with cupcakes, licorice and cookies transforming the table’s surface into a giant Pac- Man grid. I used a contemporary cultural icon to create a centerpiece for his birthday celebration. Jewish cooks, for millennia, found their creative stimulus in themes from the Bible, regional folklore, and daily life. The Hanukkah story of the rededication of the Temple and the single vial of oil lasting eight days was the impetus for the creation of the potato pancake, probably in the early 17th century, when potatoes were first grown in Europe. In reality, the story wasn’t solely responsible for this culinary treasure. More than likely, seasonal activity created the ubiquitous crispy potato latke. After three months of carefully over-feeding the geese, (historically raising geese was a Jewish occupation) Jews would slaughter the birds in early December to use their feathers and down for warmth. Their meat was cooked and preserved in its own fat as a confit to be eaten during the long winter, and the copious amounts of fat were rendered to produce the cooking oil that would be used for most of the year.  With all that freshly rendered fat, it was easy for the European Jew to round up a few potatoes and an onion and create a poor man’s delicacy that symbolized the story of Hanukkah.

Prior to the discovery of the potato, the original Hanukkah culinary expression served for millennia was a cheese pancake. As the story goes, Judith learned that the Assyrian General, Holofernes, was coming with his army to annihilate the Jews of her community. She went to his tent with wine and salty cheese and cajoled him to eat and drink until he was in a drunken stupor.  When he was asleep, she cut off his head, put it on a pole, came out of the tent and scared the general’s army away saving the Jews from destruction.  Cheese pancakes symbolized this triumphant act of courage. Symbolism is frequently incorporated into culinary custom. Foods that are regionally available dictate the expression of that symbolism. If you mix some goose or chicken fat with a plentiful supply of radishes in the shtetl you create a salad that is, according to folklore, one of the Maccabees’ favorite foods (perhaps this story comes from the fact that the Roman word for radish means root and hiding in the mountains required the Maccabees to survive eating mostly root foods?)

Middle Eastern dishes made with bulgur, like delicate, crisp, fried Kibbeh always graced the Hanukkah table. North African Jewish communities relied on couscous to create a festive meal and the Dutch saw a parallel to the Hasmoneans’ struggle in their own siege of Leyden in 1574. A small band of Dutch soldiers organized a surprise attack on the invading Spanish army’s camp at dinner time and the Spanish soldiers were forced to flee leaving their simmering pots of stewed vegetables with sausage behind.  Many Dutch Jews served a mashed stew of vegetables with garlic sausage called Hutspot on Hanukkah to commemorate this battle and its similarity to the Jewish struggle. An entire article could be devoted to the myriad variations of fried doughnuts served around the world to commemorate this holiday and latkes take on an entirely different meaning in Italy when made with Arborio rice, raisins and pine nuts. The common denominator for all of these choices is the story of Hanukkah and the survival of the Jewish way of life.

Learn how to make potato latkes and fresh applesauce using the following videos:

Tina Wasserman is the author of Entrée to Judaism, a Culinary Exploration of the Jewish Diaspora. Tina is trained in Foods and Nutrition and has taught her love and understanding of cooking and Jewish culinary history to audiences in synagogues and Jewish organizations throughout North America and Europe. She is also the food columnist for Reform Judaism magazine and serves on the URJ Camp Newman board in California. She lives in Dallas, Texas and is a member of Temple Emanu-El.