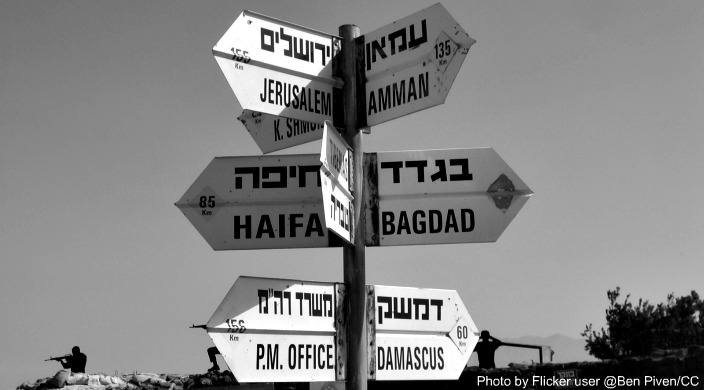 “The relation of Diaspora Judaism to that of Israel is like the relation of heat to the flame that produces it. Without the flame, there could be no heat. If we wish to enjoy the heat of Jewish creativity in the Diaspora, we must, through our personal participation in the Zionist cause, keep feeding the flame of Jewish life in the State of Israel.” –Rabbi Mordechai Kaplan

The basic Zionist premise on Jewish life is that there are two places in the world: Israel and outside-of-Israel (known in Hebrew as Hutz La’aretz, often abbreviated as Hu”l). This truism came into being when, according to our commonly accepted narrative, the people of Israel were exiled first to Babylon in 586 BCE and subsequently re-exiled after the destruction of the Temple in 70 CE.

For approximately 2,000 years, the term golah (exile) referred to all Jews living outside Israel, including those who had been forcibly removed from their homeland and were living elsewhere. After the State of Israel was established and the Law of Return was enacted, mainstream Jewry came to understand that there were, in fact, a great number of Jews willingly living outside the Land of Israel. This revelation altered the notion that all Jews living outside Israel – whether in Amsterdam, Boston, or Hong Kong – were somehow in exile.

To say that the Israel/Diaspora relationship is changing is a vast understatement. In his new book Ally, Michael Oren, Israel’s former ambassador to the U.S., offers a seething ex post facto assessment of the political and official state-to-state relationship between Israel and the U.S. Rabbi Eric Yoffie, president emeritus of the Union for Reform Judaism, writes in Haaretz:

[Although Oren] “professes to have written it in order to enlist American Jews to fight the Iran deal,… it is likely to do exactly the opposite. If he wanted to influence the American Jewish community, he needed to show some understanding and sympathy for that community. Instead, he gave us a book that, in its own way, is dripping with contempt.”

The fundamental question here is this: Do today’s Diaspora Jews see themselves as living in a Diaspora? And if not, how do we define our relationship to the Jewish State and the Zionist enterprise?

Rabbi Larry Englander, chair of ARZENU, the International Federation of Reform and Progressive Religious Zionists, believes we can view the relationship in two distinct ways:

“According to the first, Israel is the center of world Jewry, the sun that sends its rays to communities in the Diaspora. In countries where the Jewish light becomes dimmed and life becomes inhospitable, Israel must draw the light back and bring Jewish people into the sun.

According to the second narrative, however, there are many flames of Jewish life throughout the world, each kindling and sustaining each other. Israel is the brightest flame but it, too, is sustained by the others. In this tale, the Diaspora plays a vital role in making Jewish values and Jewish culture a global phenomenon, thus making the world itself a better place.”

A third way to view this relationship – reflecting the changing times – is as an open exchange of ideas that ebb and flow in a constant back and forth motion, addressing how best to create a vibrant, meaningful, and sustainable Jewish society in every place that Jews live. This view acknowledges Rabbi Mordecai Kaplan’s premise that the Diaspora must continue to feed the flame. It also poses a radical reframe of Israel vis-à-vis the Diaspora that abruptly overturns the accepted understanding of the heat-to-flame correlation and leads some to reject the very term used to describe Jews living outside Israel. Indeed, those who view all Jewish communities as equal to one another are uncomfortable with the term “Diaspora” and call for significantly modified terminology.

While I do not advocate the rejection of the term Diaspora, which does, in fact, reflect our people’s long-ago dispersion from a central homeland, I am also a proponent of the evolving relationship between the Jewish communities in Israel and those outside-of-Israel.

Moving forward, this relationship must be based on partnerships. Creating strong partnerships that embody the ebb and flow of ideas and joint ventures is essential if we are to provide Jewish communities worldwide with both the heat and the flame.

Indeed, it is time to create a new reality, moving past the one-sided notion of support that has framed the Israel/Diaspora relationship for more than half a century. Toward that end, the Reform Movement is working in full cooperation with the government of Israel (Israel’s Ministry of Diaspora Affairs) to build and sustain meaningful partnerships. Domim-aLike is one such alliance. Spearheaded by Nir Barkin, a former community rabbi and educator at Congregation YOZMA in Modi'in, Israel, and now the director of the Israel-Diaspora department at the Israel Movement for Progressive Judaism, in collaboration with ARZA, Domim-aLike will connect various Jewish “flames” around the world through meaningful study, work, and collaboration. Each flame, in turn, will burn brighter, helping to foster ideological, creative, and practical exchanges among all the world’s Jewish communities.

This post is the first of three about Israel/Diaspora partnerships within the Reform Movement. Keep an eye on the blog for additional posts on this important topic.