Creating Torah from Challah and Challah from Torah 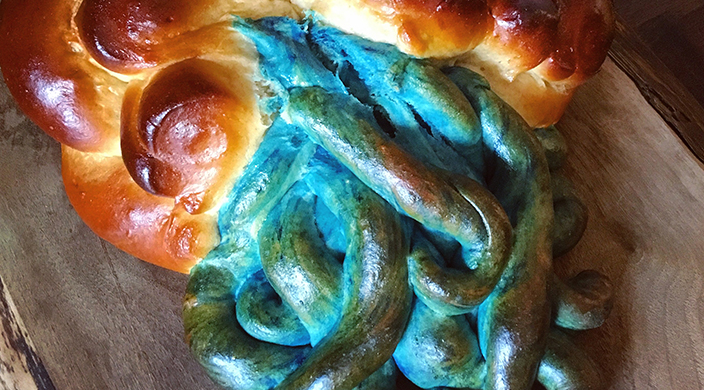 What started as a one-time experiment to shape a challah to reflect the Torah portion about Noah has grown into a two-year project of creating thematic challot (plural of challah). Rising fourth year Hebrew Union College-Jewish Institute of Religion (HUC-JIR) rabbinical student Vanessa Harper calls it “Lechlechallah,” punning on Lech L’cha, the Torah portion in which God instructs Abraham to venture to the unknown promised land.

Harper’s foray into crafting a stunning challah each week during 2018-19 grew from her study of the parashah (the weekly Torah portion), her insights about it, and imagining designs. As she anticipated the challenge of devising a challah a week to match a full year of Torah portions, she mostly worried about how to depict the Levitical passages about leprosy. In the end she fashioned that one with marzipan and slivered almonds. Each of the other 51 Torah portions came to fruition as well. This year, her breads have been inspired by the holiday cycle. Though the challot have been eaten, her Instagram account has captured each one.

In an interview over cupcakes, she explained to me that “Bread is my interpretive medium; I do not see myself as an artist...It’s less about how it looks at the end and more about the process of doing it. It is good for my soul.” Challah making has become an important aspect of her sacred time.

A couple of weeks ago, I attended Harper’s class, “Challah Dough as an Interpretive Medium,” offered through a Be Wise Fellowship in Jewish Entrepreneurialism awarded to Harper by HUC-JIR. She enthusiastically and very patiently guided participants through basic shapes using Play-Doh, followed by implementation in the trickier bread dough. Harper reminded us that “the beauty of working with challah as an interpretive medium is that you can build your midrash (interpretation of biblical passages) visually and flavorfully.” Bread dough is a living substance, “a microcosm of life,” and working with it is “an act of co-creation, a balance between your imagination and the dough’s capabilities.”

Although not a professional, Harper has been baking since childhood, when she and her mother concocted a lot of sweet treats. Bread was not part of the repertoire, however. Only recently has Harper mastered these impressive bread skills. Her muse has taken her beyond the traditional seasonal challah expressions such as a round challah for the High Holidays. Although aware of those Jewish precedents, she is not constrained by them. Indirectly she builds on earlier expressions of bread shaping. Germanic customs of braided breads probably influenced Ashkenazi versions of braided Shabbat breads. Ukrainian and Polish doughy decorations for wedding loaves may have influenced Jewish wedding customs such as the koyletch bread dance in which a koyletch (twisted loaf) is held by dancing wedding guests. Babka may be related to Eastern European Easter breads. Many cultures enjoy celebratory, special occasion, egg-rich, yeasty treats, distinct yet also universal.

Some of us may find the very thought of challah baking intimidating, as I did. Or, perhaps challah baking is part of your weekly routine. Whether midrashic interpretations through challah become your custom or not, Harper hopes that her Lechlechallah project will “inspire and empower others to take ownership of Torah study and Jewish learning more broadly for themselves, in whatever way most speaks to them.” That serves up some tasty Torah. After all, as Pirkei Avot 3:17 teaches, sustenance, flour, and bread all are deeply connected to Torah.

Photo credit: Vanessa Harper, whose challah for Parashat Chukat depicts the water that flowed from the rock after Moses struck it with his rod.

END_OF_DOCUMENT_TOKEN_TO_BE_REPLACED

When I became rabbi of Monmouth Reform Temple in Tinton Falls, NJ, I quickly discovered that some people in our community thought we were a church. Mail was addressed to “Monmouth Reformed Temple,” and letters were addressed “Dear Pastor.”
Challah
Image