The Day I Met Leonard Cohen in Jerusalem 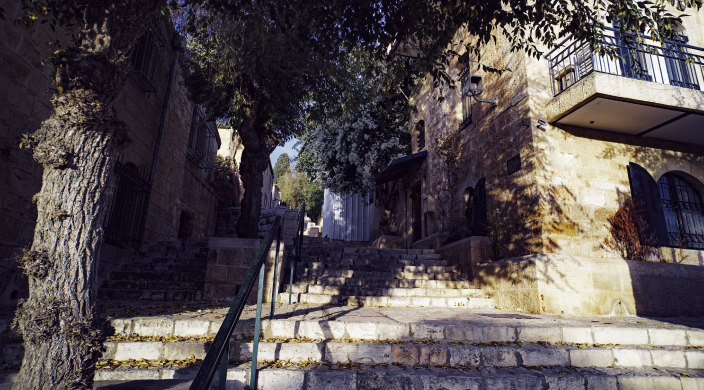 Julia Knobloch captures the essence of the “wandering Jew” in her powerful collection of poems, Do Not Return (Broadstone Books, 2019). Each poem evokes intimate memories of people and places she has known personally or encountered through her identification with the collective Jewish experience.

In her verses, filled with pathos and longing, time and space are collapsed, transcended. Her ancestors and influencers are ever present – Batya, who drew Moses from the river; Grandmother Hanna grinding poppy seeds in prewar Poland; a priestly Leonard Cohen in a gray suit sitting on a divan.

Julia was born and raised in Germany and has lived in France, Portugal, Argentina, and the U.S. She is a member of the Sweet Action poetry collective and the recipient of a 2017 Brooklyn Poets Fellowship. She is a planning executive at the UJA Federation of New York.

I sat down with Julia to talk about her debut book. But first, two excerpts:

I often return to train stations
expecting to find a home in the space
between arrivals and departures.
I am looking for my mother.
-- from “Return”

…On the eve of the day of five afflictions,
he watched me from across the aisle in the old city.
He called me Brooklyn, it was printed on my t-shirt.
With inquisitive kindness, he glanced at me.
You want to buy this postcard? It is pretty.
I said, I have no one to send it to.
He answered, Your heart is broken,
my name is Cohen, let me bless you.
His warm hands smelled of cigarettes and dust.
He placed them on my head, as if he were my father.
-- from “Two Priests (The Day I Met Leonard Cohen)”

ReformJudaism.org: The collection’s first poem is titled “Return” and the last “Do Not Return.” What is the significance of this theme?

Julia Knobloch: It’s about trying to find a place to feel at home, but at the same time feeling alienated or rejected. That is mostly how my life has been. I framed the collection between those two poems to signify the circular nature of leaving and returning, if not physically then emotionally to a time and place. We often say we don't want to return, but then, somehow, we return again.

You intersperse eight “dispatches” from Buenos Aires, where you lived for two years. Does that city hold a special place in your heart?

Yes. I loved and still love Argentina, the people, music, the nature. At one time I wanted to make Buenos Aires my permanent home. But after many discouraging experiences, I moved on. It was a failed immigration – you can say an impossible romance.

I was particularly drawn to “Two Priests (The Day I Met Leonard Cohen).” How much has Leonard Cohen influenced you?

I started listening to his music at the age of 12 and have never stopped. Over the years it has become clear how much my thinking and writing and perspective on life have been unconsciously influenced by some of the songs. As I began studying Judaism, I found that many of the themes were already familiar through his lyrics. He shaped a lot of my creative thinking and sensual disposition.

Your poem “To My Unknown Jewish Ancestor” begins: “Your blood is thin in my veins” and it ends with “…be kind, let me pitch my tent. / I may have Amalek’s accent / And the only word for me is stranger / but I am your long-lost sister. Bless me.” How does this poem relate to your own sense of Jewish identity and belonging?

Thin blood refers to my learning as a teenager in Germany that we had a remote Jewish ancestor in our family. That genealogical connection made a very deep impression on me.

“Amalek’s accent” (Amalek was an ancient enemy of the Israelites) refers to the reaction many people have when they hear my German accent. They say, “Oh you have a German accent. So you aren't Jewish.” The question about whether or not I'm Jewish is therefore constantly with me. I know that after one converts, DNA isn’t supposed to matter, but in my experience it does. So the question is: How do you both belong and not belong? It is not lost on me that the Hebrew word ger refers both to a “convert” and a “stranger.”

You dedicate the book to Katharina. Would you tell us about her?

She is my 4-year-old niece in Germany. I dedicated the book to her because not having children of my own, I want to entrust to her the legacy of my life experiences.

Do Not Return can be ordered through local bookstores or through the publisher, Broadstone Books.