Debbie Friedman's user-friendly liturgical compositions are sung in Reform congregations across North America, and her Mi Sheberach has helped countless individuals derive strength from singing in solidarity. What are the sources of her inspiration?

Amidst the Hudson Valley's astonishing fall foliage, the Tarrytown Music Hall in suburban New York buzzes with excitement. Temple Beth Abraham's centennial celebration concert is about to begin. As Debbie Friedman and her band start to play, almost the entire audience joins in song. The rabbi, cantor, and some fifty children ascend the stage; the others dance a hora around the hall, weaving in and out of the aisles. Debbie does that to people.

If you are not familiar with Debbie Friedman by name, chances are you know her music. For more than twenty-five years, Debbie’s melodies have become part of the Reform repertoire, and thousands of Reform leaders have enjoyed her concerts at the Movement's Biennial conventions.

Debbie is one of the best-selling artists of contemporary Jewish music, having recorded twenty albums which have sold well over 200,000 copies. Her tapes and CD’s for children, which teach Hebrew concepts and the holidays, are known by youngsters nationwide; Barney, the purple dinosaur, has performed her "Alef Bet" song on TV. In 1998, the Forward named her as one of the hundred most influential American Jews.

Debbie's pleasing folk-style settings of the V’ahavta, the Mi Sheberach, and many other prayers are singer-friendly, allowing for more interactive worship. "My objective is to involve people in the experience," she says. "I try to make prayer user friendly. Because the music is in a familiar genre, people are able to make the connection between the music and the text. The real power is in the poetry of the liturgy, how moving and stirring it can be, connecting us to our deepest and most precious ideas, hopes, and fears." On some of her recent recordings Debbie's voice has a Judy Collins quality, and the orchestration is lush. Most of her music, however, can be readily played by guitar strumming camp song leaders

Debbie learned to love Judaism from her bubbe and zadie, traditional Jews who lived upstairs in a two family house in Utica, NY. When she was five years uld, her father, a kosher butcher, decided to move the family to St. Paul, MN. There, the Friedmans joined a Reform congregation and sent Debbie and her two older sisters to a Conservative Hebrew school.

She first picked up a guitar at the age of sixteen, inspired by Bartura Gutkin, one of her fellow counselors at Herzl Camp in Wisconsin. At home, she continued to teach herself how to play, mostly by listening to "Peter, Paul and Mary" records. "It was really funny when I first performed with Peter Yarrow professionally," she recalls. "It was as if we'd always played together, because I'd learned how to play by listening to him."

In 1968, she began song-leading for her synagogue's youth group, which led to her attending a song-leader workshop at the UAHC Kutz Camp Institute in Warwick, NY. Three years later, she wrote her first song, a setting of the V’ahavta. "I taught it to a group of kids who were doing a creative service with James Taylor, Joan Baez, and Judy Collins music," she recalls. "Not only did they sing the V’ahavta, they stood arm in arm. They were moved; they were crying. Here was something in a genre to which they could relate."

In 1972, Debbie recorded her first album, Sing Unto God, a compilation of Shabbat songs featuring a high school choir. "I had planned to make a demo tape," she recalls, “but when I found out it would cost only $500 more to make 1,000 LPs, I thought, why not? They sold like hotcakes at camp. That's how it started. It was a fluke."

A year later she moved to Chicago, where she taught religious school, directed a youth group, and sometimes led services. Soon she was playing occasional concerts. Several years later, she was hired as a "cantorial soloist" (not a cantor, as she didn't have the formal training) in California. She taught day school, continued the concert circuit, and made recordings to sell at her shows. As people brought the melodies and settings from her performances into their synagogues, her reputation grew.

In 1988, Debbie signed a recording contract with Sounds Write Productions, headed by Randee Friedman (no relation), whose husband Dick had attended Hebrew school with Debbie. Randee and Dick used to play Debbie's music at weddings and other simchas. "I liked it so much." Randee recalls,"but it wasn't available. One day I telephoned Debbie and said, ‘Can I buy a bunch of your records?’ People heard I had Debbie's recordings and wanted to buy them, so I started selling them." Randee produced Debbie's sixth original album, You Shall Be A Blessing, and Sounds Write re-released her earlier albums. The records sell via mail order, Judaica shops, concerta, and, lately. record stores. Her presence in the mainstream presents an interesting problem. At music stores, she might be found in ethnic," "folk," "female vocalists," or in some other classification that doesn't quite fit. Debbie Friedman seems to be a category unto herself.

Her music draws from many sources, ranging from Judy Collins to the late Qwaali singer Nusrat Fateh Ali Khan. Anything her ear processes could turn into a melodic idea for a song. "What I do is respond to text," she says. "A rabbi friend of mine calls my music musical midrash. It's an interesting way to look at what I do,"

On the bookshelves of Debbie's apartment, well-worn volumes of Midrash and Talmud share space with volumes on contemporary Jewish thought. "They are essential in my grasping what these prayers are about," she says. "In the text that I'm working on at the moment, one particular phrase goes over and over in my head. I write about what comes to my mind in relationship to these words, lyrically and musically.” When setting Hebrew text to music, she finds the language so musical it practically writes itself. "Hebrew has its own internal, passionate music.”

Most of her songs are created for specific people and occasions. Her frequently performed "Mi Sheberach," for example, was composed for simcha chachma (celebration of wisdom) ceremony honoring a woman friend on her sixtieth birthday. "My friend was having a very difficult time in her life, and a number of her friends were also struggling," Debbie explains. "Yet she had arrived at this age and she was determined to embrace it. Mi Sheberach spoke to that.” Introduced to the Reform Movement at the UAHC San Francisco Biennial in 1993, Debbie's "Mi Sheberach" has since become the fastest adopted liturgical melody in the Reform and Conservative Movements.

Since 1988, Debbie has been struggling with a neurological condition that has necessitated occasional periods of inactivity. She approaches her illness with positive resolve. "Every one of us has to confront challenges," she says. "If we don't, we're missing out on a whole dimension of our lives. If we choose to numb out and not experience what's around us, well, that would be a pretty horrid way to live."

Debbie derives strength by tapping into the healing power of communal prayer. "Being in a community helps people deal with their pain." Debbie says. "Oftentimes, when we're ill or depressed we feel spiritually wounded. We withdraw, we isolate, and we leave ourselves out in the cold. During healing services, individuals - sometimes hundreds of people - stand together; share time, song, and prayer; and acknowledge that we're grieving, we're in pain, and we're in solidarity. We're not seeking miracles, we're not casting away our crutches - we're finding a way to deal with the fact that we might not be able to put them down. We literally take the readings and music into our bodies to sustain us through the trauma. So much singing and spirit come from the pain."

In 1995, Debbie achieved a career watershed, selling out Carnegie Hall in celebration of her twenty-fifth year as a performer and releasing a two-record set of the event. In 1998, she recorded a pop album titled It's You, produced for Sounds Write Productions by the music director of "The Manhattan Transfer." In 1999, Hallmark released a line of greeting cards, the "Tree of Life" collection, based on her lyrics, with five cards for Rosh Hashanah, five for Chanukah, and two for Passover. And her 20th album, "The Water in the Well," released this past December, is rapidly becoming her most successful.

Debbie Friedman's work is a testament to her passion for "bringing people together" and the power of community united in song. 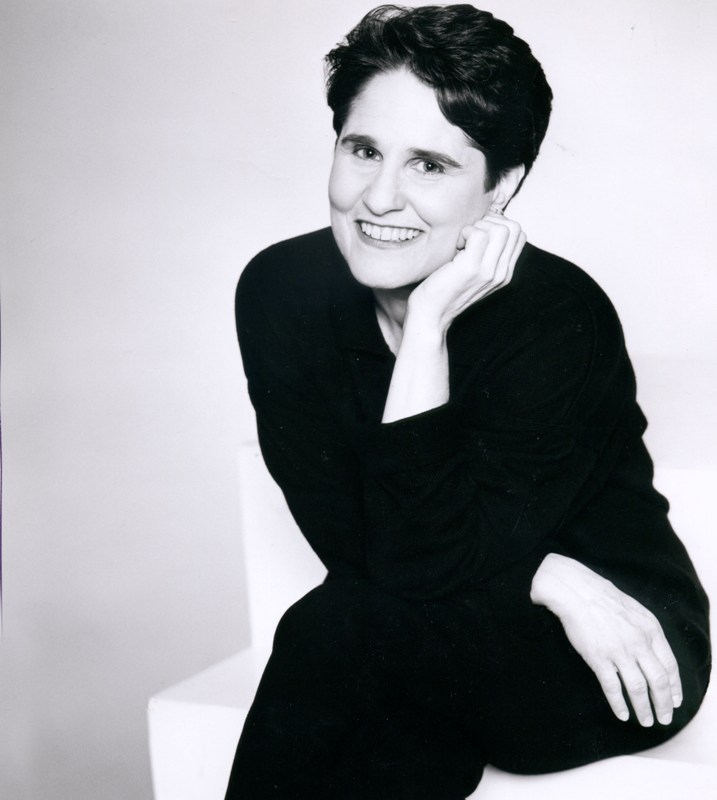 Hank Bordowitz, member of the Reform Temple of Suffern, NY, is the author of Bad Moon Rising: The Unauthorized History of Creedence Clearwater Revival.

END_OF_DOCUMENT_TOKEN_TO_BE_REPLACED

Growing up, Aaron Bendich would spend lots of time with his grandfather Max in the North Bronx, in a house “filled to the brim” with records, videotapes and CDs. Among Max’s collection were recordings of Yiddish songs and other Jewish music.
Jewish Rituals and Symbols
Image 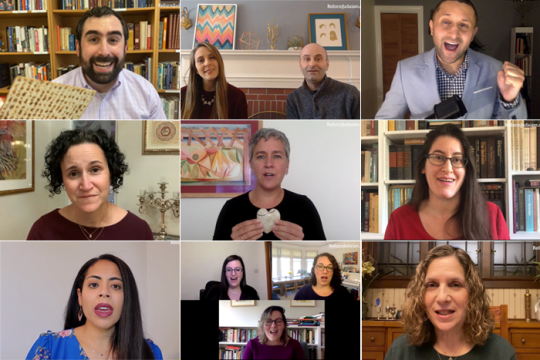 Share These Videos by Reform Jewish Leaders for Your Passover Seder

Reform leaders from North America and the UK share videos to accompany your Passover festivities. Each video is 2-6 minutes long and contains blessings, songs, and insights that perfectly supplement any seder and add a unique element to your celebration.
View More