Drunk on Purim: What Are We Teaching Our Kids? 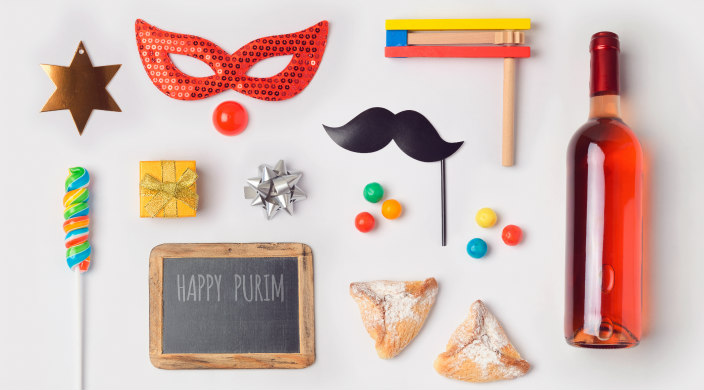 Even when my children were very young, I worried about alcohol addiction. It is so common and so destructive – and by the time teens reach high school, there’s not much you can do to shield them from it. My children are at increased risk because my father and grandfather both suffered from alcoholism.

So I did what any vaccine-loving mom would do: I inoculated them!

On our daily commute, there were plenty of opportunities. As we passed a man sprawled on the sidewalk with a bottle next to him, I said to my toddlers, “Yikes! That poor man passed out. He might have had too much alcohol. I hope he’s going to be OK! Let’s put some coins in his cup and hope he feels better soon.”

A teenager clutching his belly and looking green provided another instructive example: “Don’t look, kids. I think he might throw up! Too much alcohol can do that. Oh, I feel so bad for him. He’s really suffering!”

I didn’t know whether my strategy was working until a few years later, on Purim. Like many congregations, my kahal (community) embraces the custom of drinking boisterously on this happy day, following the edict that ,“A person is obligated to drink on Purim until he does not know the difference between "cursed be Haman" and "blessed be Mordechai." (There is, however, some discussion about what this edict really means.)

On Purim at our congregation, Pinchas brings his custom-blended Scotch to pass around. Marilyn pours the etrog-infused vodka she’s been steeping since Sukkot. There is a sense of joyful abandon and silliness as we read the M’gillah (Book of Esther), bottles of booze and little plastic cups making their way around the costumed actors, elders, rabbinate, schmoozers, and revelers of all ages.

My son, though, was having none of it. His Hebrew school class joined us in the sanctuary just as I was preparing to imbibe a generous shot of mystery liquid poured for me by my friend Katherine.

“No, Mom! Don’t!” he said, catching me in the act. I stopped with a chuckle, reassuring him, but he wasn’t moved by my recitation of the Mordechai/Haman edict. I tried to persuade him that I was an adult and a little wouldn’t hurt me, but he insisted, “No, Mom! Don’t drink that!” As I grasped for the winning argument, I told him that this is a community tradition, and sometimes you just have to go along with your tribe. “No, Mom, no!”

It was a standoff. He then offered me his very best, biggest, chocolate-filled, sprinkle-covered hamentasch (which he’d baked with his class that morning) – if only I would put down my little plastic cup. Clearly, the boy had won.

As I sank my teeth into his delicious pastry, I was heartened to realize that my attempted inoculation had taken hold, but I was flummoxed by my new quandary: As someone who has seen the dark side of alcoholism and worked so hard to teach my children about its risks, why did I then try to convince my son that it’s OK for his mom to take shots on Purim?

Up to that point, I had blithely accepted the most common explanations of the tradition of drinking on Purim: that intoxication can tame the controlling mind and release the passions, fostering joy and exuberance, and helping us fully experience and enjoy this delightful holiday.

But that doesn’t square with what I know about the harmful side of alcohol: It destroys people’s lives. One in 12 adults in the U.S. struggles with alcohol abuse or dependency. Countless people have to choose between skipping the Purim festivities or joining in and suffering the consequences. It’s beyond ironic that the holiday known as the happiest day in the happiest month of the Jewish calendar can exclude or harm nearly a tenth of our community.

Add to that suffering the misery of all the once-a-year drunks bowing down (as Mordechai refused to do!) before the porcelain god(dess) the next morning. And what message are we sending our children?

Searching for answers, I found an ingenious bit of sleuthing by Ayalon Eliach, a lawyer and rabbinical student. He investigated the writings of Rava, the Babylonian Rabbi credited with the instruction to get drunk on Purim. According to Rava, both Haman and Mordechai participated in the reprehensible debauchery that kicks off the Purim story. Rava believed that Mordechai’s ambition and jealousy – not religious convictions – led him to humiliate Haman and put the entire Jewish community at risk. For Rava, Haman and Mordechai were more similar than different. Both were villains.

Rava also believed that wine could help people achieve deeper insight. Putting two and two together, Eliach suggests that rather than advocating that people becoming so drunk as to mistake a hero for a villain, Rava was actually encouraging people to have a little wine in order to sharpen the mind and recognize that Haman and Mordechai were equally bad.

I’m no Talmudic scholar, and I’ll let the experts sort out what Rava really meant. As for me, I haven’t decided whether I’ll drink on Purim this year, but I’ll definitely be bringing a basket of chocolate hamantaschen to pass around.

For more on this topic, read Caroline Dorn’s essay, "On Purim, Let's Get Vulnerable - Whether or Not We Get Drunk" and Kelly Hershberg's essay "It’s OK Not to Drink on Purim – and the Rest of Us Should Be Respectful of That."

Juliette Hirt lives in San Francisco and works in Oakland. She practices law, parenting, and pottery.

END_OF_DOCUMENT_TOKEN_TO_BE_REPLACED

Purim approaches, and like every other holiday we've observed during the pandemic, it will look
Youth Engagement
Image