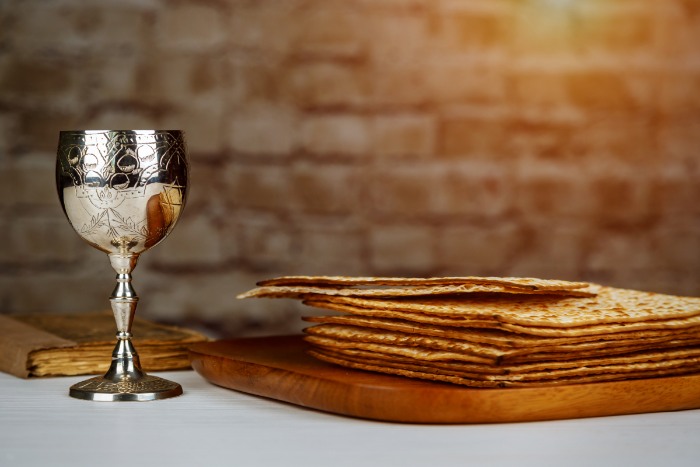 However, most of us did expect, this year, to be celebrating our holiday of freedom and liberation, free and liberated from the throes of the global pandemic. We thought we would be joining together with family and friends, with community and congregations, for in-person seders. Some may be doing that this year with the vaccine becoming more available, but for most of us, it will be a second round of Zoom, or smaller and more intimate seders.

Our HaggadahHaggadahהַגָּדָהLiterally, “telling.” This is the Jewish text that sets forth the order of the Passover seder. Plural: Haggadot.  will pose two very different and conflicting messages. The first says:

“In every generation every one of us is obligated to regard ourselves as though we had gone through Mitzrayim (Egypt, and literally meaning ‘from constricted places’) .”

We are obligated to remember that we were slaves and strangers in the land of Egypt. The message of that command is simple, as taught by Israeli journalist and author Yossi Klein-Halevi:

“For not only one (enemy) has risen up against us to destroy us, but in every generation, they rise up to destroy us.”

This message comes from the often-sung passage known as V’hi She’amdah. It is a staunch reminder of when the tribe of Amalek attacked us without provocation while we were wandering in the desert. The message of that command is:

The first message is motivated by empathy towards the oppressed. We were slaves in Egypt ourselves; therefore, we must not oppress the stranger, the “other,” the powerless, and the downtrodden. We must not abuse our power, not just because that is morally and ethically objectionable, but all the more so because we have firsthand experience of what it means to be persecuted.

The second message is motivated by alertness to threat. Every day the army prevents an attack, foils a plot, and is on constant readiness for the next attack – whether it comes from the region or from next door.

As we sit around the Seder table and tell the story of our past, we are also thinking about our future. For many Jews – in Israel and the Diaspora – thinking about our future and Israel’s future raises our anxiety. We have anxiety about Israel’s security: Hezbollah continues to build up its military strength and capability on Israel’s northern border; there is uncertainty about the future with Iran; and no one can say what will happen after the Palestinian elections this May.

We have anxiety about the nature of the soul and democratic character of the Jewish State: there is the increasing strength of the extremist anti-democratic camps in Israel; the emboldening of the nationalistic, racist, homophobic, xenophobic, and misogynistic right wing; and the Haredi camp’s monopoly on Jewish religious life.

For many Israelis, the injunction “Don’t be naive” is obvious and second nature. Sad to relate, the injunction “Don’t be brutal” is not readily apparent. Witness recent violent attacks from specific Jewish settler communities against Palestinians and Jewish activists alike (like our colleague Rabbi Arik Ascherman). These mounting number of incidents show Jews failing to live up to the teaching “don’t be brutal.” They forgot that we too must see ourselves as having left Egypt. The fact that in every generation some individuals and groups rise to try and destroy us, as we sing, does not give us carte blanche permission and justification to act brutally ourselves – as every Israeli soldier knows.

This Pesach, while we’re discussing various modern plagues, our sadness for those who are unable to be together in person and all of the other relevant and important messages and themes of the seder, let’s remember these two teachings. Because here’s the thing – both are given equally. Tradition teaches that we are not exempt from either. They call on every generation to act with compassion on the one hand and warily on the other. Both are essential to our survival and well-being, as Klein Halevi teaches: “one without the other creates an unbalanced Jewish personality, a distortion of Jewish history and values.”

Pesach is a time to rejoice, to be with family, to recline, eat and drink, sing and talk, and most important to celebrate our freedom and hopes for a better, more just and compassionate world. We can only do so when everyone is truly free.