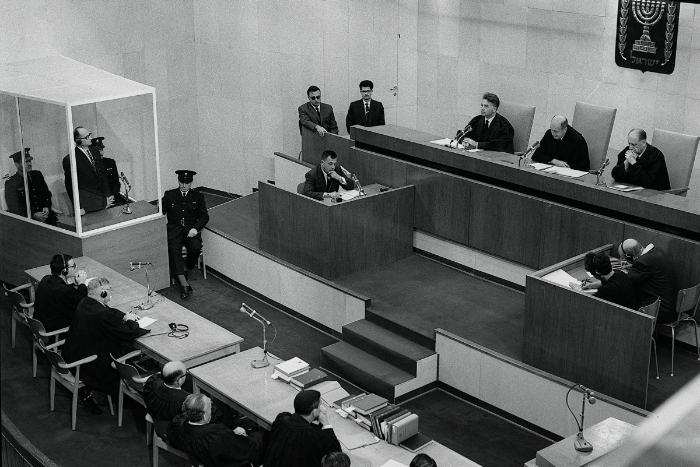 April 11, 2021, marks a significant date in the history of the Jewish people and the State of Israel: the 60th anniversary of the opening of Adolf Eichmann’s trial in Jerusalem on April 11, 1961. It coincided with the young Jewish state’s bat/bar mitzvah year of national independence. These two contrasting events represented a microcosm of modern Jewish history.

An obersturmbannführer, or lieutenant colonel, in the dreaded Nazi SS, Eichmann was the chief logistical officer in charge of the mass murder of more than six million Jews during the Shoah (the Hebrew term for the Holocaust). He escaped from an Allied prison camp after World War II and fled to Argentina, where he assumed a new name and identity.

As a result, he was not among the top Nazi war criminals that the United States, Great Britain, the Soviet Union, and France placed on trial during the famous Nuremberg war crimes tribunal in 1945.

For 15 years, Eichmann’s whereabouts remained elusive, and although he was called the major architect of the ”Final Solution” (the bland Nazi term for the mass murder of the Jewish people), he lived openly with his family near Buenos Aires and worked in a local Mercedes-Benz factory.

We now know Argentine dictator Juan Peron and his security police knew of Eichmann’s presence in the country, but they did not arrest him. However, in 1960, Israeli Mossad intelligence agents captured the Nazi escape and secreted him to Israel, where he was tried publicly for war crimes, including genocide and crimes against humanity. The extraordinary Israeli stealth operation has been dramatized in books, films, and TV programs.

Adolf Eichmann was an efficient bureaucrat, a “desk murderer” who took pride in his horrific work. An excellent administrator, he kept scrupulous records that left an extensive paper trial of evidence against him.

The 16-week Eichmann trial was one of the first televised trials, educating people around the world about the vast machinery of mass murder devised and implemented by the Nazi regime. The defendant was placed in a bulletproof glass booth to protect him from a possible court room assassination.

Israeli Prime Minister David Ben-Gurion insisted on open and fair legal proceedings that would not only prove Eichmann’s guilt, but would also detail the origin and method of the brutal German campaign against Jews, Roma people, LGBTQ+ people, and other perceived political enemies of the Nazi regime. Ben-Gurion was especially proud that it was the Jewish state – not West Germany, the United States, or any other country – that was finally bringing Eichmann to justice.

Three respected German-speaking Israeli judges presided at the trial, and Eichmann admitted to most of the charges regarding his leadership and participation in the monstrous effort that sent millions of Jews to their deaths. However, he claimed he was only a cog in a large bureaucratic machine, powerless to resist orders from his superiors.

Documentary evidence combined with the testimony of more than 100 Holocaust survivors convinced the judges of Eichmann’s guilt. Their personal stories testified to the world the radical evil of Nazism.

When the trial concluded, the German Jewish political philosopher, Hannah Arendt, published a controversial book in which she described Eichmann as simply an example of the “banality of evil.” Arendt also accused European Jewish leaders of complicity in the near destruction of European Jewry.

Emory University Professor Deborah Lipstadt, a leading scholar of the Holocaust, has refuted Arendt’s claim of Jewish guilt: “The leaders were not collaborators...they had no cards to play. They lacked the power to halt the Nazis’ resolute determination to murder Jews.”

Eichmann was convicted on all 15 counts against him. In April 1962, at age 56, he was hanged, his body cremated, and the ashes scattered in the Mediterranean Sea to prevent his burial place from becoming a Nazi shrine.

Six decades later the question remains: Was Adolf Eichmann merely the efficient administrative bureaucrat whose main task was to make certain the trains arrived on time to Auschwitz, Treblinka, Mauthausen, Buchenwald, Bergen-Belsen, and other death camps whose names will live in infamy? Or was he a fervent “true believer” in the Nazi cause acting of his own free will?

I believe the Eichmann trial answered both questions in the affirmative. Ordinary people are capable of committing inhumane acts when their leaders reward such actions. What they must know is that they will be held accountable.

END_OF_DOCUMENT_TOKEN_TO_BE_REPLACED

"Becoming Dr. Ruth" carefully and quite literally unpacks the turbulent early years of Dr. Ruth Westheimer -- Holocaust survivor, single mother, and eventual superstar sex therapist. At the same time, this one-woman show starring Tovah Feldshuh celebrates the possibilities of America, while never quite letting go of the past.
Jewish Life Around the World
Image

December 7 marks the 80th anniversary of the surprise military strike by the Imperial Japanese Navy Air Service on the US naval base at Pearl Harbor in Honolulu. The attack led to America's formal entry into World War II. What ensued would have a profound impact on Jews everywhere, including the American Jewish community.
View More