Embracing Differences on the Front Lines 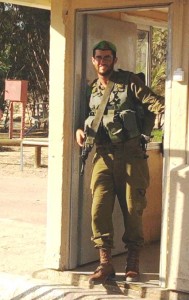 Yet another 3 hour shift of guard duty, but this time I was assigned to the back entrance to the base, which leads to the firing ranges. I don’t mind that spot so much because the drivers that are going back and forth between the base and firing ranges usually give me a sip of their Coke, or slip me a chocolate bar while no one’s looking. There are also people walking by, always up for a little bit of small talk so I end up having lots of conversations, usually brief, but occasionally there are others, like the one I had this past week, that are more interesting.

What stood out about this one conversation that was 1) who it was with and 2) that we talked about things that I don’t usually talk about with the guys in 932. I don’t know his name, but he was a Druze kid from the Herev Battalion, an infantry unit, similar to Nachal, but very different in several ways. Besides the fact that they have black berets and boots, the most striking difference is that Herev is made up exclusively of Druze soldiers.

The Druze (about 100,000 in Israel but also with population centers in Syria, Lebanon, and Turkey) occupy a somewhat enigmatic place in Israeli society. They are a religious group with Islamic roots, speak Arabic and appear to be similar to our Arab neighbors, but they are religiously insular and politically identify more with the Jewish population of Israel. With the exception of a few communities in the Golan Heights, the Druze in Israel pledge allegiance to the Jewish State and are drafted into the Army. Some of the most idealistic Zionists in Israel (most memorably an older man named Mohammed, one of the security guards at the University of Haifa with whom I used to have good conversations on my way to and from class) I have met in Israel are Druze.

Herev also does basic and advanced training on Nachal’s base, but we are on different training schedules, so we don’t have so much interaction with them. We see them occasionally in the dining hall, around base, or on the Unit’s Sport Day when they destroyed us in tug of war, but I have always been very curious about them; why they want to be in a combat unit, how they feel about their responsibilities as a soldier in a predominantly Jewish army and any other sociological questions an Islamic and Middle Eastern studies graduate could think of.

There were several moments in our 15 minute conversation in which I realized that, though we are in the same army, we serve in two very different units. We began talking about the same things all combat soldiers in training talk about: How much weight we carried in the last march, how annoying some of the commanders are, how many people have dropped out of training, and who’s gone to jail so far.

But, there was a little more depth to this conversation. I saw the difference in our army experiences when he told me how his father wanted him to serve in Givati with Jews, Druze and Bedouins, like he had done 20 years ago, and not in Herev. The reason was because his father felt that he would be disadvantaged as a resident of Dalia and not Beit Jan, where most of the officers and commanders lived. He explained to me that he was one of the few guys in his unit who were from the Druze villages in the Haifa area and favoritism plays a big role in succeeding in Herev. Since his officer is from Beit Jan, his peers from the same town are more likely to do better in the army, no questions asked.

It is true that the guys in my unit who have family members that are high-up in the army or are from certain places in the country become the favorites of the commanders, but not to the same extent. With us, someone who shares a backyard with the commander would be more likely to get out of a punishment, but from what I was being told by this guy, the commanders and officers tend to practice nepotism in deciding who to send to commanders’ and officers’ course. Collective Israeli memories from several decades back of Yemenite candidates being rejected from officers’ school based on their ethnicity sprung back at me as my new friend told me how it was unlikely that he could make it to commanders’ school because of where he grew up.

I noted another difference, which both scares and amuses me. At one point in the conversation, a guilty smile came across his face and he asked me if I shoot my gun when I take it home. Based on the way he asked me, I instantly knew what his answer to his own questions would be. I told him that I didn’t, he asked me again and again, “Really? Not even with your friends?”

It turns out that if a soldier in Herev gets out of the army to go to a wedding or birthday, he’s not allowed to bring his gun home. I’ve been living about 5 KM from the Jordanian town of Irbid long enough to know that when we hear gunshots, it’s not a firefight, but a way of celebrating a wedding. I guess the army doesn’t want to give its soldiers the opportunity to contribute to the celebrations on the IDF’s shekel. Without being too explicit, my new friend told me that whenever he and his Druze buddies take their guns home, they spend the weekend doing “advanced shooting” Again, same army, very different unit.

There were so many more places I wanted to go with this conversation, but this guy was hesitant to answer some of the more analytical questions I was asking. He told me about one weekend he spent doing guard duty in Hebron and how much fun it was to freak out the Palestinian kids throwing rocks at him when he screamed at them in Arabic and knew exactly what to say when they were cursing the Jewish state and the Army.

“Isn’t that weird for you?” I asked. You speak the same language, share a relatively similar culture, but identify with a very different ideology and represent an institution that our peers on the other side of the Green Line despise. He gave a shrug to all of this and didn’t really want to broach the subject, leaving my curiosity unsatisfied, but I was thankful for even a brief glimpse into the world of a Druze combat soldier in the Israeli Army.

This conversation was yet another reminder that throughout all of the marching and crawling in the sand, and sweating under the sun, I am not only in the army, but I am in an army that brings together citizens from all sides of the cultural, political, and religious spectrum for a common goal of defending our homes and families. Even when the world tries to define this army as a black and white, treacherous institution, for me at least, my experiences and memories so far strongly challenge that conception and add more shades of gray to the equation.

Adam Ross, son of Rabbis Dennis Ross and Deborah Zecher, currently lives on Kibbutz Sde Eliyahu, Israel. After completing a Bachelors degree in Islamic and Middle Eastern Studies at Brandeis University, Adam made Aliyah and enlisted into the army shortly after. He currently serves as a commander in the Nachal Infantry Brigade.