Experiencing Rosh Chodesh at the Kotel 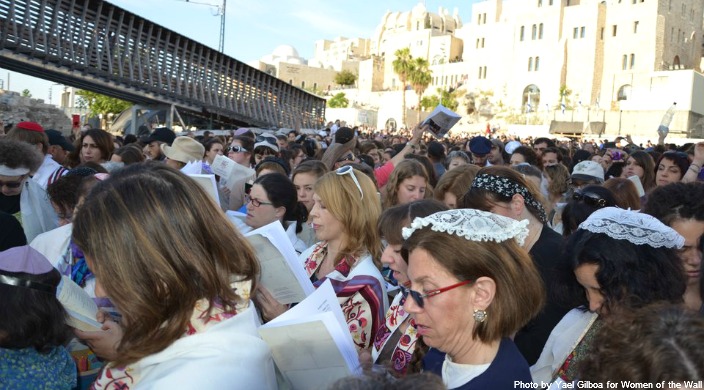 This morning, we went to the Western Wall to pray with Women of the Wall for Rosh Chodesh Sivan, the festival celebrating the new month. Though a large group of progressive Jews were present, there were also thousands of Ultra-Orthodox men and women who had been bused in to protest a recent ruling by the Jerusalem District Court allowing women to pray as they wish at the Kotel. It was a moving, tense, and, at times, frightening scene. After we took some time to process our experiences, we reflected together on the day.

Gavi: After an emotional morning at the Kotel with Women of the Wall, I am very ready for Shabbat. After almost 13 years of praying with my tallit, I put it on at the Kotel for the first time and said shehecheyanu (the blessing we say the first time we do something and to mark joyous occasions) with tears streaming down my face. Being yelled at by thousands of my Ultra-Orthodox brothers and sisters, being called horrible things, and having bottles and rocks thrown at my community at me and is not typically how I would like to spend my Rosh Chodesh – but it’s how I chose to today.

Jason: As with most days in Jerusalem, I am filled with mixed emotions. On the one hand, I felt incredibly proud. I felt proud to have prayed alongside a group of strong, brave women. I felt proud to have found an opportunity to stand, quite literally, in support of the values I hold and the Judaism and I believe in. I felt proud to have been with a community that responded to cursing and shouting with smiles and wishes for a Shabbat Shalom and a Chodesh Tov (the standard greeting for Rosh Chodesh). And I felt proud to have been able to stand next to my wife for an incredibly moving moment as she put on a tallit (prayer shawl) at the Kotel for the first time. The singing and praying was sincere and impassioned in a way that I had never before experienced with Women of the Wall. I felt strong in my convictions and so glad to have had the opportunity to be a part of that community.

During the service, I also took a video of the recitation of the prayer written for Women of the Wall, a special prayer read during the Torah service honoring the role of women and praying for their voices to be heard.

Despite all the pride, I also felt remarkably sad. I had never before felt afraid at the Kotel, but the throngs of angry, shouting, shoving people surrounding us had a look of malice that was shocking. On our way out of the city, people threw water bottles, and a classmate of mine was hit by a rock. We were loaded onto buses so that we could leave in safety, but even as we drove out of the Old City, Ultra-Orthodox men lined the street, giving us the finger, banging on the bus, and throwing rocks at the windows. How, in the Jewish Homeland, could any Jew – let alone Jews praying at our holiest site – be treated that way by their brethren?

Jason: The rabbi of the Kotel, Rabbi Shmuel Rabinovich, said that Women of the Wall are forcing their views on other people – but all the group actually requests is the opportunity to pray in peace at the place that has been the heart of the Jewish world for thousands of years. For centuries, our people were told that as long as no one saw us praying, we could do what we wanted. At other times, we were forced to pray in hiding for fear it would disrupt public order and poison the community. Now, Jews in the Jewish State are calling for the voices of their brothers and sisters to be shoved aside and silenced.

This service was the first time I prayed wearing tefillin (phylacteries), and it could not have been a more important Shehecheyanu moment. I only hope that in the future, the large crowds will be singing in support instead of shouting hate.

Gavi: We cannot begin to express enough our appreciation for the presence of the police. Their presence and their support to keep us safe and give us the opportunity to pray. I am thankful to the police who kept us safe and for upholding the ruling of the Jerusalem Court, to my friends who held my hands, and to my husband who kept me strong.

Following a tense morning at the Kotel, I was also thankful to get out of Jerusalem for a few hours for a beautiful outdoor lunch with our family in Gush Etzion. This country may have its ups and downs, but it is my homeland.

Jason Fenster is a first-year rabbinical student at Hebrew Union College-Jewish Institute of Religion. He was a 2008-2009 Eisendrath Legislative Assistant at the Religious Action Center of Reform Judaism. Gavi Young Fenster is a student at the Conservative Yeshiva in Jerusalem. She is originally from New Rochelle, NY and loves Shabbat, singing, and making chicken soup. Jason and Gavi met at Brandeis University and were married on June 3, 2012. They have been spending their first year of marriage learning and living in Jerusalem.