Facts Make You Free: A Reflection on the 70th Anniversary of the Liberation of Auschwitz 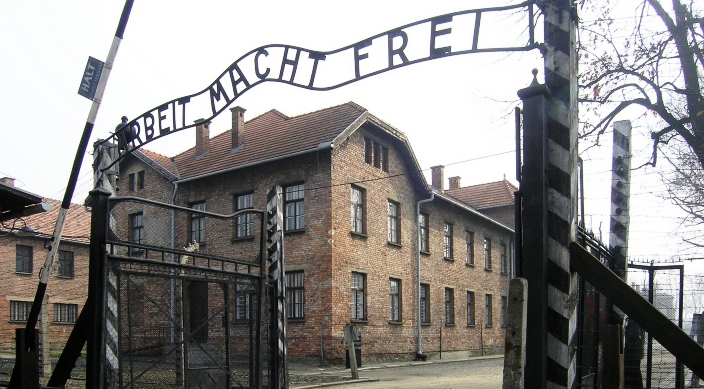 Today, as the world marks the 70th anniversary of the liberation of Auschwitz, I am thinking of my father, of blessed memory. He was among the Jews forcibly marched through the camp's entrance gate under the cynical Nazi motto: Arbeit Macht Frei, Work Makes (You) Free.

I was always painfully aware that my parents were concentration camp survivors. There was no way they could conceal their past; my father's body was a virtual map of the Holocaust, from the blue number tattooed on his arm to the scars on his chest and back where a bullet that had pierced his body.

As a child, I fantasized revenge. As an adult, I eased my emotional burden by learning as much as I could about the Shoah. I traveled to Bendzin, Poland, my father’s birthplace, to see where he lived. In that place, I realized for the first time that what had happened to my parents during the war did not happen to me. The invisible number on my arm suddenly flew into the sky.

Since then, I've visited the Auschwitz memorial site three times. During my first visit, I noticed a door near the entrance marked "Archives." Inside, I asked the clerk for information about my father, Wolf Manheimer. Minutes later, she returned with a copy of his Auschwitz ID card. It struck me that he had been removed on January 25, 1945 – only two days before Red Army troops liberated the camp!

Five years ago, I was part of a Jewish delegation to Bad Arolsen, Germany, home of the world’s largest repository of WWII documents, administered by the International Committee of the Red Cross (ITS). When a staff member asked for a name to demonstrate its new digitalized retrieval system, I offered mine. Within seconds, the monitor displayed: “Aron Manheimer, Polish Jew, born on January 29, 1948 in Feldafing Displaced Persons Camp, U.S.-Occupied Germany.”

I requested a search of my father's name and, just as quickly, images of his concentration camp documents, postwar medical records, and displaced person credentials appeared. Minutes later, a staffer brought in his actual Displaced Person photo ID card (in mint condition), which he had been required to relinquish upon receiving permission to emigrate to America.

One of the documents in his file solved a mystery. Here is what I knew: After jumping from a cattle car, my father was shot by a Nazi guard. He was taken to a hospital by local people who had found him. He was treated by doctors, who then reported him to the Gestapo. He was arrested as an escapee and sent to Mauthausen Concentration Camp in Austria for special punishment. On liberation day, American GIs pulled his body, emaciated but still breathing, from a pile of corpses.

Questions remained: Why was my father on that train? Why did he jump? How long between the time he was shot and his arrival at Mauthausen? ITS documents filled in some of the details. The train evacuated Auschwitz inmates ahead of the advancing Soviet forces. My father entered Mauthausen on February 16, 1945, only three weeks after being shot. Yet he managed to stay alive until the American’s liberated the camp on May 5, 1945.

Even uncovering a single fact, such as the date of my father entered Mauthausen, has altered how I relate to what Elie Wiesel termed “The Kingdom of Night.” The perfect metaphor for me is tikkun olam, the mystical idea that repairing our broken world requires our gathering all the sparks of light scattered and hidden at the moment of Creation. Gathering facts helped me to move my family’s Holocaust legacy from the realm of emotion to one of knowledge, bringing me comfort and tikkun.