Finding the Opportunity in Crisis 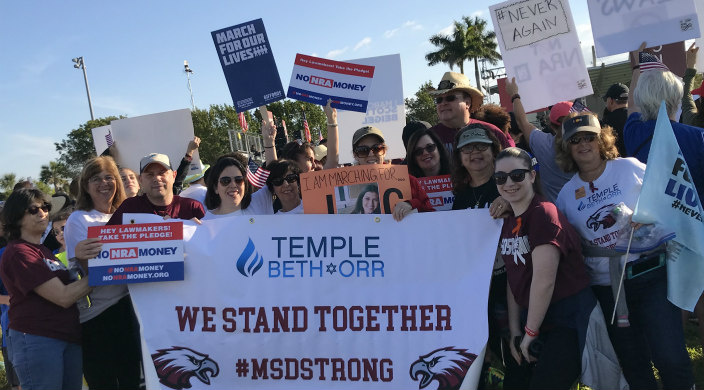 The day after the shooting at Marjory Stoneman Douglas High School, we arranged to have numerous counselors at our congregation, Temple Beth Orr in Coral Springs, FL, to work with students, teachers, parents, staff, and lay leaders. In a group session a few days later, a trauma specialist taught us that the way to say “crisis” in Chinese is weiji, which is invoked by two Chinese characters that mean “danger” and “opportunity.”  He explained that the horrific, horrible act – the danger – had already happened to our community, and now, we needed to find the opportunity. (I’ve since learned that the definition of the second character as “opportunity” is, in fact, a mistranslation, but the lesson – as hard as it was to hear – did prove to be timely and invaluable nonetheless.)

What opportunity could possibly be found in 17 senseless murders? Our community, often considered one of the safest in the nation, had been shattered. Parents had spent hours trying to find their children only to learn some of them would never go home again. Everyone, it seemed, teetered in a state of shock, terror, and mourning.  Looking for opportunity seemed incomprehensible and pointless.

Five days after the shooting, a congregant asked me to go to Douglas with her to offer a prayer. As we drove up to the school, a sea of news trucks engulfed the road. As we exited my car, a young woman was screaming at a news reporter, “Leave me alone. Let me cry and mourn my best friend in peace.”

On the grass at the entrance of the school, 17 monuments stood, crosses and Jewish stars to represent the adults and students who lost their lives just days earlier. We walked around together and read the words on each monument. We placed stones on the Jewish markers and offered prayers at each of them.  Then we separated for a few moments of private time.

Walking toward Alex Schachter’s monument, I saw two teens in Douglas shirts standing statuesque in front of the marker. I asked the young man if he had known Alex. “Yes,” he said. “He was one of my closest friends. I saw him die. My class was one of the classes in the freshman building that was shot up.”  As he pointed to the closed building with yellow police tape around it, tears filled his eyes. “I don’t know how I will ever go back to school.” I offered him a hug and he hugged me.  The young woman next to him said, “Thank you. I am his sister.”

As we talked, I noticed the young man was wearing a chai necklace, so I said, “I am a rabbi, and if you ever need to talk, I am here for you.”  The young woman responded, “I could use a synagogue and some prayer right now.”  I invited her to my synagogue any time, assuring her I would pray with her.

When they asked where I am a rabbi, I said, “Temple Beth Orr in Coral Springs.”  The young woman, Jessica, said, “That’s our temple.” She looked at me with big eyes full of tears and love, and the three of us embraced in a tear-filled hug for a long moment – a prayer without words.  Our encounter reminded me how a hug and simply being present for others is almost always more important than any words we can say. I hoped I would talk to Jessica and her brother again.

Back at my office, when I couldn’t find the family in any of our records, I worried they had become unaffiliated and I wouldn’t be able to reconnect with the teens.

At Friday evening services a few weeks later, I gave a d’var Torah (an interpretation of Torah text) about finding opportunity in crisis. I explained I finally had come to understand that opportunity is found in mitzvot (commandments) that we can perform, noting how our congregation had come together to support those in need, including the family of one of our teens who had been injured, following the shooting. Each of those mitzvot, and even smaller ones, like hugs and kind words, are the opportunities we need to find and embrace after the danger that creates crisis. More than that, they are what helped us and our whole community begin to heal.

Following my d’var, we chanted from the Torah. Just before I asked everyone to rise so that we might lift and then dress the Torah, our president asked me if I wanted to call up Jessica for the honor of dressing the Torah.

“The young woman you met at Douglas a few weeks ago.”

Jessica and I both cried as she walked to the bimah (The platform from which services are led) and hugged the same prayerful hug we had shared at Douglas.

“This is Jessica,” I told the congregation, “the young woman I just spoke about in my d’var Torah.” Everyone was in tears as we offered her the gomel blessing, thanking God that she had escaped danger. At that moment, everyone truly understood there is opportunity in crisis.  May we all understand this lesson and look so that we may find it.