Finding Our Own Power in Purim 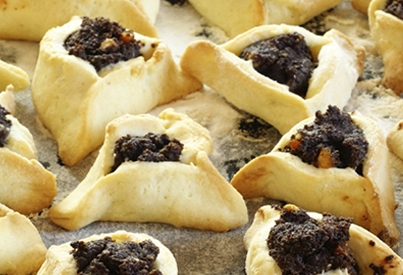 Purim is almost here! It’s loud, it’s raucous, it’s festive, it’s colorful, and the food is great. It’s no wonder the rabbis of the Talmud saw Purim as such a high point in the calendar that they declared, “When Adar [the Hebrew month housing the holiday of Purim] enters, joy increases (Babylonian Talmud Ta’anit 29a). On the 14th of Adar, Jews around the world celebrate Purim, which commemorates the salvation of the Jews of Shushan and the defeat of the evil schemer Haman (boo!).

Beyond the masks, the groggers (noisemakers), and the hamantaschen is a complex story about identity and power. There is a phrase from the Book of Esther, which recounts the story of Purim, frequently used in association with Purim: v’nahafoch hu, “it was turned upside down” or “the opposite happened.” After all, things are “turned upside down” in so many ways in the story of Purim: Queen Esther, who first appears as a demure, closeted Jew, ends up saving the Jewish people by standing up to King Ahashverosh. Haman’s evil plot to wipe out all the Jews of Shushan leads to his own demise. And the Jews of Shushan, once powerless subjects, become powerful actors, able to control their own destiny.  We read in Esther 9:1:

...When the king’s command and decree were to be executed, the very day on which the enemies of the Jews had expected to get them in their power, the opposite happened [v’nahafoch hu], and the Jews got their enemies in their power.

In a unique twist, the Jews of Shushan not only survive, they receive permission from King Ahashverosh to fight back, defending themselves against those in the kingdom who might still wish them harm. In a section of the Purim story that I didn’t grow up hearing (and one that is sometimes overlooked), the Jews of Shushan go on the offensive, killing 75,000 people according to Esther 9:16:

The rest of the Jews, those in the king’s provinces, likewise mustered and fought for their lives. They disposed of their enemies, killing seventy-five thousand of their foes; but they did not lay hands on the spoil.

This demonstration of Jewish power may make some of us uncomfortable. After all, as Jews, we do not typically revel in the celebration of physical might or military victories; we celebrate the miraculous nature of Jewish survival against all odds. Here, we see a new image of Jewish power—not just self defense, but offense. Adele Berlin, in her commentary on this verse, explains that the number of victims is likely a hyperbole, part of a “carnivalesque fantasy” of the potential for Jewish power (Adele Berlin, The JPS Bible Commentary: Esther, p. 87). Though the numbers may be exaggerated, the message is clear: as Jews, when we receive power, we must demonstrate restraint in its use.

Rabbi Heath Watenmaker is the first Reform Outreach Initiative rabbi at Rutgers University Hillel in New Brunswick, NJ. The Reform Outreach Initiative is a grassroots effort among Rutgers Hillel and Reform rabbis, lay leaders, and donors throughout New Jersey, providing Reform Jewish students on campus with a Reform rabbi uniquely dedicated to meeting their needs and building a Reform Jewish presence on the Rutgers campus, which includes more than  6,000 Jews. He can be reached at rabbiheath@rutgershillel.org.

Rabbi Heath Watenmaker is the Reform Outreach Initiative Rabbi at Rutgers University Hillel in New Brunswick, NJ. The Reform Outreach Initiative is the first grassroots effort between Rutgers Hillel and Reform rabbis, lay leaders, and donors throughout New Jersey that provides Reform Jewish students on campus with a Reform rabbi uniquely dedicated to meeting their needs and building a Reform Jewish presence on the Rutgers campus with 6,000+ Jews.