Following the Footsteps of the Prophets to Selma: A Conversation with Civil Rights Activist Rabbi Everett Gendler 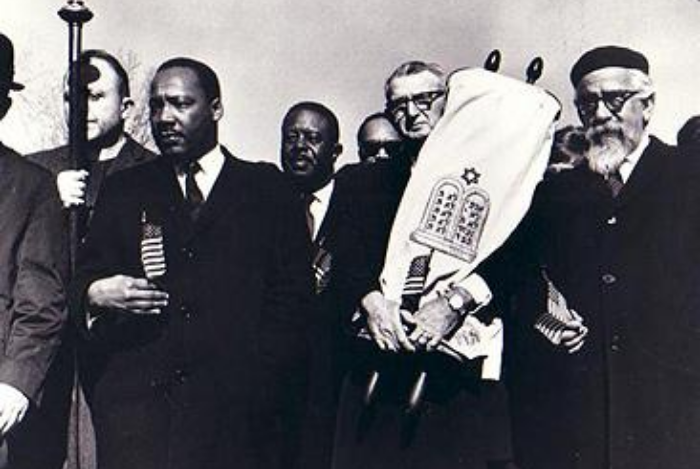 Rabbi Everett Gendler is known for his involvement in progressive causes, including the civil rights movement, nonviolence, and environmental justice. From 1978-1995, he served as the first Jewish Chaplain at Phillips Academy, Andover, MA, and is the author of Judaism for Universalists. We spoke with him on March 3, 2020.

Ali Rosenblatt: How did you first get involved with the civil rights movement?

Rabbi Everett Gendler: After ordination in 1962, I was about to take up my first rabbinic post when Rabbi Israel Dresner phoned to tell me that Reverend Dr. Martin Luther King, Jr. was asking for northern clergy to help him in Albany, GA. Even though my furniture had not yet arrived, I felt the need to respond to Rev. King’s prophetic appeal to conscience.

I had always been quite moved by the prophetic tradition. The biblical prophet Amos was one of my companions during high school, along with Henry David Thoreau. By temperament and inclination, I was drawn to this approach to the world, and what we were obliged to do with our lives.

I ended up in jail in the county stockades.

I kept in touch with the civil rights movement and in May of 1963 led a group of rabbis down to Birmingham, where the police responded to our demonstrations with fire hoses and police dogs. Who can forget those horrific photos of children being threatened?

During the Selma crisis, I went down again, accompanied by my wife, Mary. She had grown up in Kansas City, where Rabbi Samuel Mayerberg had been involved in the struggle for decent government and had fought against the machine.

We were in Selma, AL, for the frightening and frustrating experience of “Turnaround Tuesday,” when Reverend King turned us back while waiting for the results of a court appeal. He was rising above the moment and above the conflict to find common ground. He could’ve marched on through then, but that would have created greater divisions, and no one would have defended the marchers.

But, King’s patience – and patience by the way is a great revolutionary virtue – meant that that final march was the marchers protected by the same state troopers who earlier had clubs and beaten the marchers…that was so distinctive about King’s struggle and the spirit he brought to it.

That’s why Mary and I joined him in the struggle.

Regrettably, because of the many demands of a congregational rabbi – wonderful demands – I did not feel I could go down to the final march in Selma, where Rabbi Abraham Joshua Heschel represented us so honorably. Rabbi Heschel had come to me before going; understandably, his wife and daughter were concerned for his safety. I tried to take that into account, while still encouraging him to go. His “praying feet” have become a part of our own religious vocabulary.

How have you remained involved in the quest for social justice?

Back in Princeton, I joined with a number of other local clergy to help find affordable housing for People of Color. At the same time, I was involved with Rev. King and Rabbi Heschel and other clergy in protesting the moral atrocity of our nation’s involvement in Vietnam. There’s a photo of Heschel, Rabbi Maurice Eisendrath, Reverend King, Reverend Ralph Abernathy, and me with a flag at the Arlington National Cemetery Vietnam War demonstration. [Image shown above]

In recent years, I have continued to be involved in nonviolent struggles and taught a course on the subject at the Phillips Academy in Andover.

Post-retirement, Mary and I became active with the Tibetan exile community in India. We helped the Dalai Lama’s community there develop a community-wide program on strategic, nonviolent struggle. For the last 22 years, we’ve been commuting to India, focusing on the Tibetan struggle for dignity and human rights in the face of challenges from China, to put it mildly.

What do you see as some of today’s most formidable challenges?

One of the challenges is to find the inspiration to rise above our smaller, personal issues and try to include all of us in a common struggle for justice.

We must engage politically and use our influence, but we need to do it in a way that moves all of us forward.

We need to feel again that sense of deep kinship, mutual love and admiration exemplified by the relationship of Reverend King and Rabbi Heschel. Knowing that we are coworkers with the Divine in these marvelous, redemptive activities elevates and empowers us all in ways difficult to describe.

Ali Rosenblatt is a 2019-2020 Eisendrath Legislative Assistant at the Religious Action Center of Reform Judaism (RAC).

END_OF_DOCUMENT_TOKEN_TO_BE_REPLACED

I've been reflecting on the story of America's founding - the narrative many of us learn as children in the United States. I've recently learned a different version of that story - one that I now recognize intertwines with my own. My identities as Cuban American and Jewish have been shaped by Indigenous stories in America and in Cuba; particularly the themes of beginnings, loss, transformation, and change.
Social Justice
Image

October is Domestic Violence Awareness Month (DVAM) in the U.S. This year, the National Network to End Domestic Violence (NNEDV) chose the theme of #Every1KnowsSome1 to highlight how common domestic violence is. Each of us may (or likely) knows someone, either in our Jewish community or our secular communities, who has been impacted by or is a survivor of domestic violence.
Jewish History
Image