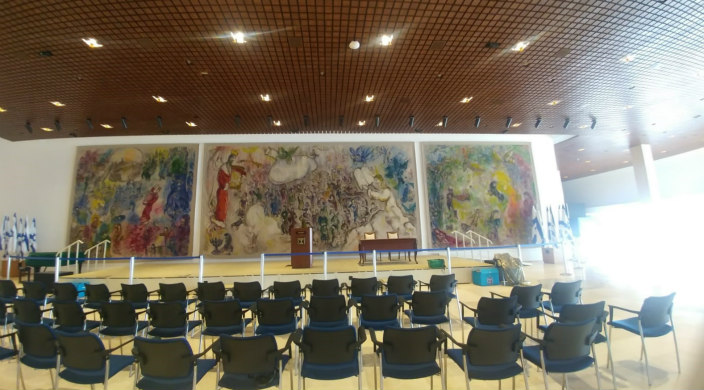 After finishing final exams and celebrating the end of the semester, I decided to spend some of my winter break exploring new sites in Jerusalem. Although I learned a fair amount about Israeli politics over the past few years, I had never actually been inside the Knesset (parliament) building. A close friend recently started working there, and I was excited to learn from her on a guided tour.

The tour began with relatively basic questions, pitched to a public group with vastly different levels of background knowledge:

When did the State of Israel declare its independence? May 14, 1948.

On what day of the week did the declaration occur? Friday afternoon, before Shabbat began.

How many members of Knesset are there total? 120.

The tour moved beyond these simple facts, though, as we walked into Chagall Hall.

Marc Chagall was one of the most famous Jewish artists of all time, whose work is displayed not only in Israel, but all over the world. A large ceremonial hall in the Knesset features several of his mosaics and tapestries. I am not someone who often has an emotional response to visual art, but the pieces were evocative. More than the colors or the images depicted, I was moved by seeing such a huge space in such an important building dedicated to the work of a Jewish artist. Beyond the partisan politics or the cynicism I often feel regarding the government, Chagall Hall inspired a genuine feeling of hope.

Three tapestries form the focal point of the room, depicting the Jewish past, present, and future. The past tapestry focuses on the Exodus from Egypt alongside other stories from the Tanach, and it includes key leaders such as Moses and King David. The present is presented in more vibrant colors and includes representations of the Jewish holidays that mark our year. The future is vibrant as well, but the style is blurrier and far less defined than the other two. It is bordered by heroes and heroines of the past, and at the center animals that are typically enemies coexist in peace, symbolizing the ideal future we should all be working to create.

The artwork is beautiful, and the message is clear: as we remain rooted in our past and are blessed to be alive and thriving today, we are responsible for building a brighter and more peaceful future. This is the message that shifts me from simply appreciating the artwork to seeing the bigger picture. These pieces are on display in the parliament building, the legislative arm of the Israeli government. The laws passed in this building can either bring us closer to the ideal future Chagall depicts, or they can delay and distort this vision.

The people who sit in those 120 Knesset seats make a difference. They determine whether laws are passed that protect children, promote women’s rights, combat racism, advance economic opportunity, ensure religious equality, and enable coexistence. I attended the Knesset tour the day after the ruling coalition decided to call for early elections, which will occur in April 2019. Now, more than ever, it is important to fight for a government that represents our values and builds toward a future of hope and peace.

Learn about Reform Zionism, including the Reform Jewish community's efforts to build a pluralistic, Jewish democracy in Israel.