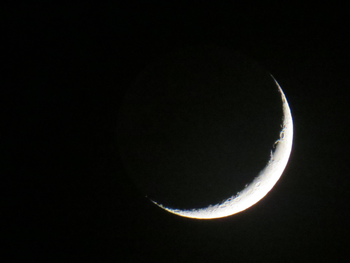 How did they examine the witnesses? The pair that arrived first they examined first. And they brought in the elder of the two and said to him: Relate how you saw the moon: in front of the sun or behind the sun? To the north of it or to the south of it? How high was it? And how wide was it? If he said, In front of the sun, his statement was worth naught.  And then they brought in the second one and examined him.  If their statements were found to agree, their evidence stood… The head of the court said, It is sanctified!  And all the people answered after him, It is sanctified. Whether it was seen at its proper time, or whether it was not observed at its due time, they proclaimed it sanctified.
-Mishnah Rosh HaShanah 2:6-7

The details of the lunar cycle have been understood for thousands of years. Ancient observers made precise observations, and kept exact records, and because they cared more than we generally do about the movements of the heavenly bodies, they knew more than most of us do about them. Thus, while the Mishnah (around 200 CE) goes into great detail about the  procedure for recruiting and examining witnesses to the exact moment of the “birth” of the new moon each month, this ritual was largely symbolic, because the rabbis knew quite precisely when the moon would be new. By the 4th century, this ritual had fallen into disuse, and the calendar was “fixed,” calculated and published, so that everyone could know, to the second, just when each new moon would fall, for all time. The Muslims, interestingly, continue to determine their calendar by observation, so there remains a small range of uncertainty each year regarding the beginning and end of the month of Ramadan – and occasional disagreements between different authorities.

The margin of error, even under a system of observation, can’t be more than a day, because the cycle goes on even if we don’t manage to observe it; if witnesses couldn’t be found to pinpoint the moment of “birth” of the moon, it would be declared by default on the day after; i.e., the moon was obviously “born,” on time, whether we saw it or not. But this variation of one day matters if it determines the timing of holy days; for example, if you get the date of the first of Tishrei wrong, then you’ll get Yom Kippur wrong, and end up eating on Yom Kippur and fasting when it’s not.  So the religious/political authority to determine the new moon was critical to keeping the people united.  Once there was a Diaspora, there was a natural power struggle between Israel and the far-flung communities – and a clear understanding that if there were no central calendrical authority, the communities would drift apart. Hence the Mishnah goes on to describe the system for disseminating the date of the official new moon, by beacons and later by runners, to the communities of Babylonia. Since sometimes the news took a long time to arrive, the law developed of observing the three Torah-based festivals – Sukkot, Pesach, and Shavuot – for two days, to cover both options regarding their possible date if a firm determination of the preceding Rosh Chodesh was not received in time (Purim and Chanukah are not Torah-based; Yom Kippur simply can’t be observed for two days). To this day, traditional Jews observe these festivals for two days in the Diaspora, whereas in Israel, the original source of the observation, one day is enough. Rosh HaShanah, however, has always remained two days even in Israel – it is the only festival that falls itself on Rosh Chodesh, so the uncertainty about its observation was a factor even in Jerusalem, without the problem of delay of transmission. Therefore, the second day of this holiday is not a Diaspora custom, but inherent in the day itself.

In 19th century Europe, many Jews rebelled against second day festival observance, as impractical and irrational and obsolete. Ultimately the lines were drawn according to the new denominations, with Reform rejecting the second day, and Orthodoxy refusing to question it.

Interesting: If holidays are wonderful, why wouldn’t one want to double them? But clearly we don’t  I think most traditional Jews would agree that the single day holiday observance is an advantage enjoyed by those who live in Israel, a liberation for those making aliyah. The distinction, I guess, still has the effect of implying that in Jewish life, there is a center – and there is a periphery. Is there?