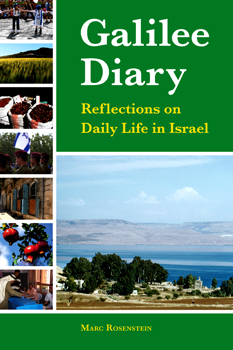 It is life we want, no more and no less than that, our own life feeding on our own vital sources, in the fields and under the skies of our homeland, a life based on our own physical and mental labors; we want vital energy and spiritual richness from this living source. We come to our homeland in order to be planted in our natural soil from which we have been uprooted, to strike our roots deep into its life-giving substances, and to stretch out our branches in the sustaining and creating air and sunlight of the homeland. –A.D. Gordon, “Our Tasks Ahead,” 1920

Life in Israel, the week after Tu BiSh'vat, I:

The slaughter and uncertainty continued in Syria, and Israel apparently bombed an arms convoy en route from Syria to Lebanon. Egypt seemed to be moving back toward chaos. There was a suicide bombing in Turkey. What does all this mean for us? The Israeli post-election negotiations (and attendant flood of speculation and wise commentary) was at fever pitch, as party leaders conferred publicly and secretly, jockeying for a place in the coalition; the only thing that seemed certain was the degree of uncertainty about who will end up giving up what in return for what, and how the result will impact on our lives. Meanwhile, two Israeli documentaries are Oscar candidates, but this is a bit awkward, as both are explicitly critical of Israeli policies; presumably our diplomats are, ironically, hoping they don’t win. And just when we thought we had as much uncertainty as we could handle, Stanley Fisher, who had served as a symbol of stability and wisdom in his eight years as governor of the Bank of Israel, unexpectedly resigned.

Life in Israel, the week after Tu BiSh'vat, II:

This has been a particularly stormy winter, with heavy rains, damaging winds, flooding in the heart of Tel Aviv, and snow in the mountains. After a week’s respite, the stormy winter resumed mid–week, with several days of cold, wind–driven rain all over the country. The Kinneret is fuller than it has been in years. We are told that “the drought is over” (for now). Saturday there was a change in the weather, and the day was mostly sunny and cool, with clouds scudding across the sky all day. In the afternoon we took a walk down into the Hilazon Valley, between Shorashim and the Arab village of Sha’ab. The hillside was lush with new growth, and the first wave of wildflowers was in its glory   the bright red kalaniyot (anemones), and little purple karmeliyot (ricotia). The mud along the bottom of the valley, where the Arab farmers had cultivated around the olive trees, was too soft for walking, so we made our way through the waist   deep sea of thorn bushes on the hillside – the ubiquitous thorny burnet, a mass of interlocking needles (covered with tiny green leaves at this season) that don’t penetrate jeans, so you can wade through – and the nastier calycotome, with long, sharp thorns and bright yellow blossoms that make the hillside seem to glow in the afternoon sun. We encountered a herd of cattle scattered through the greenery, grazing so intently they hardly noticed us passing near them. They included a number of fuzzy calves, and were attended by their patrol of tall white egrets. Birdsong, the cows’ lowing, the rumble of a tractor across the valley. Stepping through a patch of wild oregano, the fragrance mingled with the smell of mud (and cows). In the shelter of the valley the warmth of the sun soon had us shedding layers.

The Jewish people returned to its land in order to return to nature.

The Jewish people returned to its land in order to return to history.

It seems, for better or for worse, that you can’t have the one without the other.