Hanukkah Confessions of an Interfaith Kid 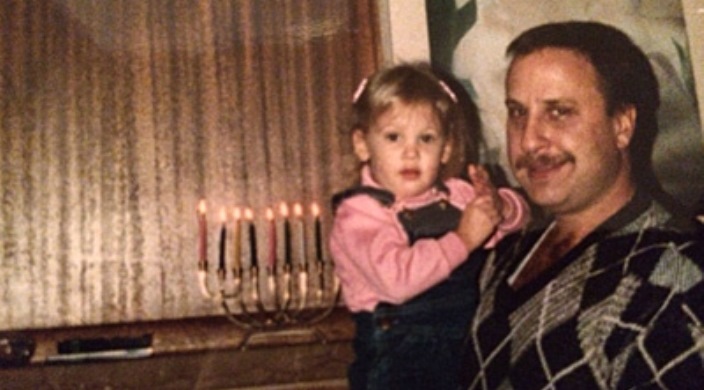 I’m pretty sure my family coined the term Christmukkah. We were interfaith hipsters, once we realized that the alternative, Festivus, wasn’t really for the restofus. My family began blending two faiths at a time when rumor had it that my bubbie had to pay off the cantor at her shul to marry her son to a Catholic; a time when my parents could only find one congregation in a 30-mile radius that welcomed interfaith families in practice, not just in theory.

As a result I grew up in a predominantly Christian suburb as an ambassador for the Jewish people. The experience was a sliding scale of pride and discomfort: teaching dreidel to my class when I was in second grade and the resulting underground candy gambling ring; nursing a non-Jewish high school boyfriend who got sick off gefilte fish at a family function; telling off a sixth grader who teased me for being Jewish by informing him that I got eight nights of presents when he only got one; explaining to my friends from youth group why I had a Christmas tree when they came to my house for the first time for a Hanukkah party.

There were moments when I desperately wanted to fit in. Like many interfaith children, I felt like the balance my family struck that felt so right to us made me a part of no community instead of two. I was too Jewish for the gentiles – I once had the mother of a new high school boyfriend ask, “Just how Jewish is she?” Like on a scale of one to Jewish? Probably too Jewish for you, if not your son. But I also wasn’t Jewish enough for the Jews. Even growing up in a liberal Reform Jewish community, I still had elderly women inform me that I would “really be Jewish” if I just went to the mikveh already. I found myself defensive to the point of exhaustion the entire holiday season.

At the same time, for a WASP-y town, there were plenty of people who were willing to infuse a little Judaism into an otherwise white Christmas season. My parents had a “door is always open” policy for our home that resulted in a lot of gentile friends learning about Judaism through kishke, Tam-Tam crackers, and latkes. My Girl Scout troop, which was pretty alternative to begin with seeing as it had slowly been taken over by dads by the end of elementary school, was the only one I ever heard singing Chanukah carols around town. My music teacher growing up, who loved wearing a “No L” pin year-round, made sure my class lit an electric menorah during the holiday sing.

It wasn’t perfect integration. Instead it was a lesson in inclusion. My Judaism and I weren’t swept under the rug or quietly tolerated. Instead I learned that what I had to offer elevated the status quo, exposed my peers to new ideas, and made our world richer as a result of my sharing it.

Now that I work professionally with Jewish teen leaders, I have the opportunity to think about what inclusion means in my programs, and also in the larger Jewish community. Signs point toward growing rates of interfaith marriage, and I have to ask myself how we are going to make blended families feel like they are enriching Jewish communal life, the same way I was invited to elevate my community by sharing my Judaism.

Rather than putting fences around the Torah and our congregations, we should be throwing open the doors to better share the richness of Jewish tradition, the warmth of the Jewish community, and the values that can shape lives. We should be giving interfaith kids the best we have to offer, and embracing them in return, so they can also feel included and empowered to choose Judaism.

For me, Hanukkah isn’t about military victory or miraculous oil or latkes that are perfectly crisp on the outside. It’s about a faith so deeply rooted that there was no choice but to take on a foe that seemed ready to crush us, for the chance to rededicate the temple, and ourselves, to our people and our values. What will you dedicate yourself to during this Festival of Lights? What change will you kindle? Who will feel included and valued because of you?

This year I’m looking forward to sharing Hanukkah with Thanksgiving, to reading Hershel and the Hanukkah Goblins with my littlest (gentile) cousins and making them stick their hands in pickle jars, to lighting the menorah in the glow of a (heritage, free-range) turkey rather than a Christmas tree, and most importantly, telling the family that will gather how thankful I am that we can celebrate our holidays together.

Logan Zinman works as the Regional Director of Youth Engagement for NFTY’s Chicago Area Region, developing teen leaders and strengthening congregations in the Chicagoland area. She is hoping her fame as one of this year’s Double Chai in the Chi 36 Under 36 recipients will finally get her her own reality TV show: a blend of Anthony Bourdain’s No Reservations, and that episode of Oprah when Oprah and Gail go camping.