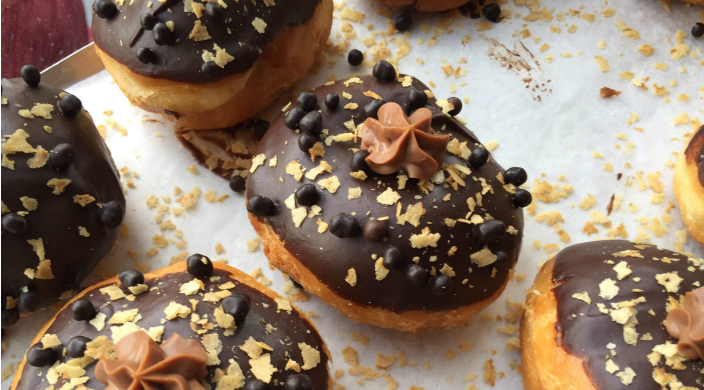 Every 10 days, I get my hair cut. I don’t have much hair, and if I wanted to, I probably could do it myself. But instead of trying to see the back of my head in the bathroom mirror like a contortionist, I go to Daniel who owns a small barbershop on Azza Street – a five-minute walk from our apartment.

It takes Daniel literally eight minutes to cut my hair – but we spend about half an hour together. Daniel understands just a bit of English, so we talk in Hebrew. He’s patient with my semi-fluent Hebrew and is pleased when he can correct me and introduce me to new words – such as “eyebrows,” – as in “Can you trim my eyebrows?”

We chat about the weather, politics, how his business is doing, and the upcoming holidays. Daniel tells me that his favorite holiday is Hanukkah. “It’s like a holiday without being a holiday. There are no rules like there are for Passover and no long prayers as on Yom Kippur. Everyone is in a good mood. And of course, there are sufganiyotsufganiyotסֻפְגָּנִית"Jelly doughnuts;" traditionally eaten in Israel during Hanukkah; singular: sufganiyah. .”

Yes, Daniel the Barber is correct. In Israel, Hanukkah is a holiday without the limitations of other holidays: we can go shopping, we can drive, the buses and trains run. And yes, everyone is seemingly in a good mood. The sufganiyot help the atmosphere, of course. It’s impossible to be in a bad mood while eating a jelly donut.

Every bakery displays trays of the donuts. They range from simple donuts dusted with powdered sugar and filled with raspberry or strawberry jam to fried architectural marvels with multiple layers, exotic fillings, syringes to inject more filling, and frosting and icing encasing the entire delicacy.

I’ve tasted almost all of them.

For the past five years, I’ve traveled across Jerusalem to sample what others claim to be the city’s best donuts. Café Kadosh, in the city center, is consistently rated as having the best donuts. (Last year’s donut filled with passion fruit cream did it for me!) But I’m always on the lookout for that unknown bakery, the one few people know about, where I find and can extoll donut greatness.

But Hanukkah isn’t only about the donuts. It’s about the entire city coming together in a rare show of cultural solidarity to observe the holiday. It’s a time when the streets of the city are festooned with banners and lights, and the walls of the Old City are decorated with animated projections: dancing candles, twirling dreidelsdreidelסְבִיבוֹן"Spinning top" in Yiddish (derived from German); "sevivon" in Hebrew; toy used in a children's Hanukkah game. , and shimmering hannukiyothanukkiyahחֲנֻכִּיָּהNine-branched candelabra used during Hanukkah – eight branches for each night of the holiday, plus another branch (often taller, central, or more prominently displayed) for the shamash (helper) candle, which is used to light the others. . Bands entertain; puppeteers and fire-jugglers perform; and actors reenact the battles of the Maccabees MaccabeesמַכַּבִּיםThe family of five sons who led the revolt against the Hellenization of Jerusalem and became the heroes of the Hanukkah story. and the lighting of the Temple menorah by the High Priest.

Thousands walk through the alleys and streets of the Jewish Quarter to see the hannukiyot displayed in the windows and courtyards. Passersby are invited to recite the blessings and light candles and favorite Hanukkah melodies are sung spontaneously in the streets. Amidst the festivities it’s startling to hear the melody Israelis sing for blessing the lights. I had never heard it before, and it sounds nothing like what most of us in the North American Jewish community sing.

Video of the Israelis singing the blessings:

As much as I like the donuts, the puppeteers, the fire-jugglers, and the dancing dreidels, as a Reform Jewish American immigrant living in Israel, the underlying message of Hanukkah as a festival celebrating religious freedom is always present in my mind as I walk through the streets of the Old City or buy (yet) another box of donuts.

Perhaps more than any other holiday, Hanukkah’s message is inexorably intertwined with the words of our national anthem: “HaTikvahHatikvahהַתִּקְוָהLiterally, “The Hope.” It is the national anthem of Israel. The lyrics speak of the 2,000-year hope that Jews will return to their land; the lyrics are adapted from a poem written by Naftali Herz Imber in 1877 in present-day Ukraine. .” The last line of  “HaTikvah” proclaims: “To be a free people in our land…” As I place my hannukiyah in the window, share with thousands of others the glow of the lights radiating though the Old City, and join with strangers in song, there is no fear of being a Jew, of celebrating in the open, or of proudly and loudly singing my songs and prayers – even if my melody is different from everyone else’s.

Follow Cantor Evan Kent’s Hanukkah donut adventures on Instagram at @evankent - and make your own Israeli sufganiyot to celebrate the holiday!