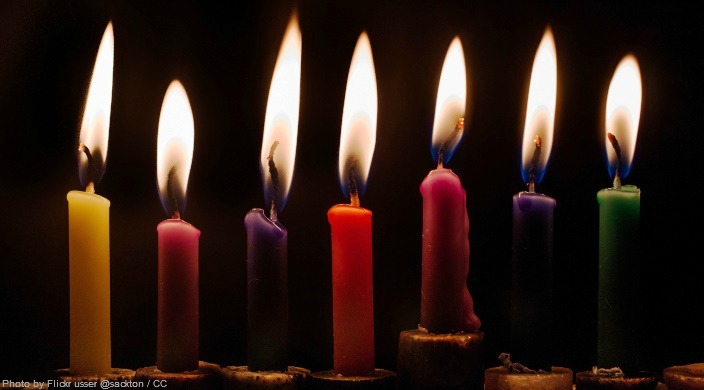 In 1974 in Philadelphia, a small menorah was lit in front of Independence Hall, home to the iconic Liberty Bell. The menorah was crude and made of wood. Five people attended what is now considered to be the first Chabad-Lubavitch public-menorah lighting. Regardless of the constitutional implications of this action, the idea of religious freedom embodied by the Hanukkah holiday deeply resonates with the core principles of American democracy. The attention currently lavished by American Jews on Hanukkah makes it difficult to imagine that there was once a time when it was a minor holiday. Yet, across America, Hanukkah's magnification as a Jewish holiday now has broader implications.

In recent years, Hanukkah has evolved into a symbol of religious liberty for all Americans. In 165 BCE, after the Maccabees, a minority, successfully revolted against the majority – the Syrian kingdom led by Antiochus Epiphanes IV – there was a rededication of the Jerusalem Temple and the rekindling of its golden menorah for eight miraculous days. This origin story naturally translates into contemporary American motifs of religious liberty and survival represented by a Hanukkah festival of lights. The story of Hanukkah also recalls the first pilgrims who arrived on America's shores after fleeing religious oppression in Europe.

Three vignettes from Montana, Idaho, and Utah exemplify how the holiday's underlying Jewish message of religious freedom is now embraced for its strong American values.

Consider this: the largely non-Jewish residents of Billings, MT, used the menorah as a means to fight the anti-Semitism and bigotry that surfaced in the town in 1993. In December of that year, Isaac and Tami Schnitzer placed a Hanukkah menorah in their window. A town resident hurled a cinder block through the Schnitzers’ window and threatened other families and institutions displaying menorahs. The townspeople decided to take a collective stand against bigotry. Through a campaign waged by the Billings Gazette and the town’s sheriff, families and businesses were asked to display pictures of menorahs in their homes and jobs. People responded so enthusiastically that by the time the campaign concluded, an estimated 10,000 people had answered the call. This community-wide protest dramatically decreased the incident of hate crimes in Billings.

Indicative of Hanukkah's mainstream popularity, even in states with small Jewish populations like Idaho, then-Governor Dirk Kempthorne signed a symbolic proclamation on December 1, 2004, naming December 7, 2004, National Menorah Day in the State of Idaho. The governor declared, "the message of Chanukah resonates quite powerfully with the fundamental principles of American life, as this nation was founded on the principles of hope and religious freedom." The proclamation reads, in part:

WHEREAS, This year [2004] marks the 25th anniversary of the National Menorah which was first lit in 1979 by President Jimmy Carter and given its name by President Ronald Reagan in 1982; and

WHEREAS, Chanukah, the Festival of Lights, is among the most widely celebrated of Jewish holidays;

NOW THEREFORE, I DIRK KEMPTHORNE, Governor of the State of Idaho, do hereby proclaim, December 7, 2004, to be national Menorah Day in Idaho.

Finally, the Americanization of Hanukkah is evidenced by the popularity of "Eight Days of Hanukkah," a song written by Utah Republican Senator Orrin Hatch, a Mormon with an affection for Jews and a love of Barbra Streisand. A video of the song debuted via Tablet, an online Jewish cultural magazine, just prior to Hanukkah in 2009.

The production of this song was a multicultural endeavor. The writing was inspired by a challenge to Senator Hatch from journalist Jeffrey Goldberg. Hatch's collaborator was Jewish songwriter Madeline Stone, who hails from the Upper West of Manhattan and now writes Christian music in Nashville. She said, "I'm a pretty liberal Democrat. But it became more about the music and the friendship for me and Orrin." The song was performed by Rasheeda Azar, a Syrian-American vocalist from Indiana. [According to Goldberg, "Rasheeda's participation closes a circle of sorts, since the Syrian King Antiochus was, of course, the antagonist in the story of the Maccabean revolt."]

Senator Hatch calls "Eight Days of Hanukkah" a "gift to the Jewish people." He said his ultimate goal would be for Streisand to perform one of his songs. "It would be good for her and good for me," Hatch said, while acknowledging that given her outspoken liberalism, “that union might require another miracle."