Happy Birthday to the Jewish Welfare Board!

A Century of Serving Jews in the Military
April 5, 2017
Image 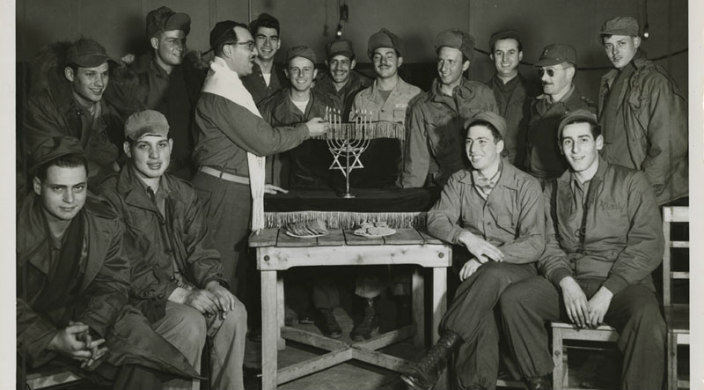 Some readers may recall the classic Monty Python comedy, “The Life of Brian,” portraying the land of Israel under Roman occupation 2,000 years ago, and featuring conflicts between groups with monikers like the “Judean People’s Front,” the “Front for the People of Judea,” and others. Couple that with the timeworn joke about the Jew stranded on a desert island who, when finally rescued, is asked why, as the island’s solo inhabitant, he built for himself two synagogues. Gesturing to one of the synagogues, the castaway explains: “That’s the one I don’t go to.”

Some jokes may not age that well, but humor, even the dated sort, still can reveal certain truths. Such jokes highlight the fact that the Jewish community is not only a monolithic group, but often a highly factitious people as well. Compared with other communities that trace their lineage back to antiquity, the Jewish community of North America is downright youthful.

More important, unlike elsewhere in the Diaspora, North American Jews have had to create their communal institutions and homegrown leadership from scratch. Although Jews first arrived in New Amsterdam in the mid-17th century, they lacked the leadership of ordained rabbis for almost 200 years. And, while more venerable Diaspora communities could rely on well-tested systems of communal organization, American Jews also had to figure out how they were to define themselves and interface with the American government and society-at-large.

Should the Jewish community view itself strictly as a religious denomination, an “ethnic” group, or both? And moreover, depending on such a definition, should Jews organize themselves on behalf of preserving and furthering religious tradition, or defending themselves against anti- Semitism, or socio-economic concerns on any combination of the proceeding measures of “Jewishness.” Just as we still haven’t been able to devise a universally agreed upon self definition, American Jews have consistently failed to unite under a single expression of Judaism. So much for the proverbial synagogue “we don’t go to.”

Diversity has long been a defining characteristic of the American Jewish experience. However, the very religious divisions inherent in American Jewish life also have been a source of controversy and viewed as a threat to the well-being of the Jewish community. But on occasion “external” forces have served to unite American Jewry in unexpected ways. Such was the case with the then-named National Jewish Welfare Board (NJWB) formed in response to the outbreak of World War I on April 9, 1917.

Even before World War I, American Jews had served in the military in every previous war, but never in such numbers. Just as their Protestant and Roman Catholic comrades had spiritual needs while in the service, the approximately 200,000 Jews who served in the U.S. military during World War I also needed rabbi chaplains, religious guidance, and ritual items ranging from kosher food to prayerbooks. The NJWB was a direct result of the U.S. government obligating the American Jewish community to centralize in the same fashion as their Christian counterparts. (For more on the JWB’s efforts in World War I, see historian Jessica Cooperman’s fascinating work and book manuscript in progress: Making Judaism Safe for America: World War I and the Development of American Religious Pluralism.)

Following the war and by 1921, several organizations had merged with the JWB to become a nationwide association encompassing Jewish community centers, Young Men’s and Young Women’s Hebrew Associations, and other community organizations, all committed to coordinating educational and social activities across the country.

With the onset of World War II, and the reality of more than half a million American Jews serving in the military, including hundreds of rabbi-chaplains, the work of the Jewish Welfare Board became even more critical. Responding to President Franklin D. Roosevelt’s call for Jews, Protestants and Roman Catholics to put aside sectarian differences for the sake of the war effort, each of these religious groups joined together and created the United Services Organizations (USO). Based on a “putting aside” rather than neutering intra-Jewish differences, the Jewish Welfare Board, in collaboration with Reform, Conservative, and Orthodox rabbis, successfully provided a unique communal framework on behalf of all American Jews serving in the military. Today, the JWB is part of the JCC Association of North America.

It goes without saying that most of us would never want the U.S. government to impose a standardized or uniform practice of Judaism, and likewise, many of us revel in the diversity of American Jewish life. But rather uniquely, the Jewish Welfare Board has been among the handful of American Jewish organizations both enabling diversity while supporting the community in its totality. Its mission remains a vital one, especially at times of crisis, when communal cohesion becomes more of an ethical and a practical imperative. May this birthday marking a century of service undertaken by the JWB be an inspiration for all of America’s Jews.