From the Heart: A Longtime Volunteer Explains What Compels Him 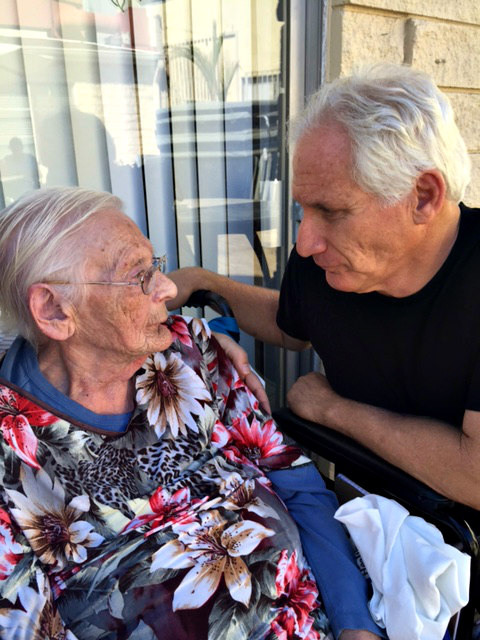 At age 62, Fred Zaidman spends his days in Los Angeles helping others. Among them is my mother, a Holocaust survivor, who has described him as a lamed vavnik – one of the 36 tzaddikim (righteous individuals) in every generation whose merit, according to Jewish legend, has kept God from destroying our wicked world. April is Volunteer Appreciation Month, so I sat down to talk to Fred – and after hearing his story, I think my mother might be right.

ReformJudaism.org: When did you first get involved as a volunteer?

Fred Zaidman: In the late 1990s, when my parents became ill, I moved closer to their house and became their caregiver.  One day, I dropped into a nearby recreation center to get some exercise and noticed that the kids tossing around a basketball were dressed in tattered clothing. There were no organized programs for these 8- to 11-year-olds, so I went around to neighborhood businesses and raised money to purchase jerseys and shorts, and we set up a league, complete with coaches and referees. Soon 40-50 underserved kids began showing up regularly at the rec center to play in tournaments. Next, we created gymnastic and piano classes.

I am still actively involved with that rec center and have continued my relationship with many of the kids through their high school years and beyond. They call me when they’re in trouble and invite me to their weddings and other special occasions. They’re like family to me.

You’ve donated platelets at Cedars-Sinai bimonthly for the past 17 years, making you the top donor in the institution’s history. What prompted that?

It began after my father received a life-saving blood transfusion there. He survived because six strangers had donated four pints of blood. I wanted to give back.

Why have you made helping Holocaust survivors a priority?

I am the child of two Holocaust survivors, and there will always be a place in my heart for survivors. I can’t go back and change history, but I can try to bring a degree of comfort to those who lived through that terrible time.

After my parents passed away in 2012 – my mother at 100 and my father at 98 – there was an incredible emptiness in my life. In my despair, I reached out to my Aunt Mania and to your mother, Adela, who I felt very close to because she reminded me so much of my mother. In fact, they had lived across the street from one another in Dąbrowa Górnicza, Poland, before the Nazi invasion. Your mother had her needs and I had mine. We helped each other out.

Now, about once a week, I visit or phone Adela, and I do the same for a half-dozen other survivors who are often lonely and struggle with various physical ailments. In our conversations, they tend to dwell on their painful pasts. I try to distract them and bring some joy and hope to their lives. If they need a ride to go shopping or to see a doctor, I’ll drive them. My attitude is, “Whatever you want, I’m there for you.”

How does your Jewishness inform your volunteering ethic?

I try to be true to myself, and it would be impossible to separate who I am from my Jewish heritage. As a proud Jew, I am consciously aware that I represent the Jewish people in my humanitarian work. I am sending the message: Here is this Jew who has dedicated the past 17 years of his life to try to repair the world. It flies in the face of the anti-Semitic image of who we are.

You were named Los Angeles Volunteer of the Year for your district in 2002. How do you feel about such public acknowledgement?

Acknowledgement is nice, but for me, it’s mostly a distraction. I want to stay focused on the most vulnerable people in our society who remain largely invisible, such as people who do not have enough to eat. One of the ways I help is by preparing food at a food pantry; in addition, I always carry power bars, nuts, and other healthy foods to hand out to homeless people I see on the streets. It is not only the humane thing to do; I’m driven by images of skeletal concentration inmates.

Do you ever feel that you are not doing enough for people?

Every day. I feel guilty that I’m not doing more. My work is often emotionally and physically demanding. It takes a toll on me, but it’s worth the cost. I will help people as long as I have the strength.