Hiding My Disability Kept Me from My Fullest Life 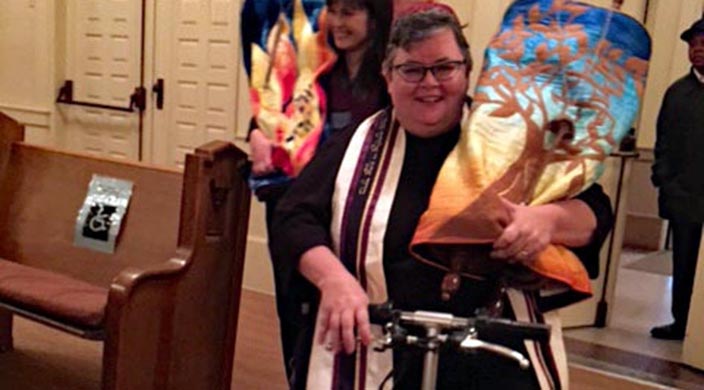 I grew up in a family where illness of any kind was regarded as weakness, a moral flaw, or both. My mother had a major stroke when she was 40 and I was 16. My father insisted we keep her stroke secret from everyone outside the family for months. I chauffeured my four brothers and sisters, cooked, did laundry, and lied to my teachers about why my homework was never done. Dad never explained why it was a secret, just that we must not tell a soul.

I learned, therefore, to be secretive and ashamed of any problem with my body. So it was that in my 47th year, I had quite a shock. When I went to take the Graduate Record Exam, required for my application to rabbinical school, it began with a questionnaire. One question asked me to click the box beside any disabilities I had. I started to skip it (never tell!), but the system wouldn’t let me move to the next screen.

I knew that “None” was a lie, so I went down the list.

Mobility? I looked uneasily at the cane next to my chair and clicked.

Hearing loss? I had just learned I have a 50 percent hearing loss, most likely from birth. I clicked it.

Learning disabilities? In the same battery of tests I’d learned I have something called “auditory processing disorder” and some other things as well. So I clicked again, annoyed.

On the next screen the system summarized me thus: Female, age 47, has advanced degrees, multiple disabilities. Multiple what?? I could not cope with those words. I pushed them out of my mind and concentrated on taking the test.

I spent the next six years trying to hide from my disabilities, which hampered my performance at school. I spent much of my time in pain, which further hampered my performance in school and at work. Determined to ignore all of it, sometimes I would finish leading a service bathed in sweat just from the pain of standing up all that time.

In short, I cheated myself.

I spent energy trying to deny what was quite obvious: I have multiple disabilities and a chronic pain problem. The pain problem stemmed from a bunch of injuries that had never been treated because my family and I had pretended they never happened, and from a foot surgery that had gone wrong. At this point, most of it is beyond repair.

The healing began one day when I was limping along after a group of colleagues who were engaged in conversation and were walking a bit too fast for me. I and another rabbi, one who had what I considered “legitimate disabilities,” were left behind. I was fighting back tears, but she was annoyed. “Forget it, let’s just stop here, and get drinks and a nice dinner without them!” she said, turning in to the restaurant where we stood. Instead of excoriating herself for “being damaged,” as I would have done, she was mad that they’d been thoughtless, and immediately moved to meet our needs. I was astonished.

A few months later we were at a conference and the same rabbi came upon me lugging a suitcase up some stairs from the parking lot, dabbing away tears of pain.

“Why don’t you have a handicap placard?” she demanded. “You obviously need one! Go to your doctor and get one!”

“It’s OK.” I remember tearing up at those words. I had divided disabled people into two categories: people with “legitimate disabilities” – people in wheelchairs, deaf people, blind people, people who were not me.

I regarded myself as a malingerer, a damaged person, a fake. It took my friend’s kindness for me to realize that all disabilities are legitimate. It is OK to need help. It is OK to ask for help. It is human to have imperfections in our bodies.

These days I have a blue handicap placard and a lightweight scooter. I don’t lead services or teach classes with sweat running down my back because I am gentler with myself. If I need to sit, I sit. If I can’t stand without pain, I don’t stand. I don’t do things that are likely to aggravate my body, and I ask for accommodations when I need them. I do not call myself “lazy” when I need to lie down.

When Jews internalize the hatred of Jews by others and turn it upon themselves, we say they are self-hating Jews. By much the same mechanism, ableism can be internalized. Very young, I absorbed the message that illness and disability were things to be ashamed of, and so I hid my troubles in shame. It was only when another disabled rabbi gave me permission to value myself as I was, by modeling that very behavior for me, that things began to change for the better in my life.

Leviticus 19:14 teaches us that we are forbidden to curse the deaf or put a stumbling block before the blind. We are not to treat people badly because they are disabled. This prohibition extends to all persons with disabilities, including ourselves.

If you identify with some part of this story, I hope you will find a way to be kinder to yourself. Sometimes that means seeking medical attention: getting a hearing aid, for instance. Sometimes it means accepting the things that cannot be fixed and getting accommodations that will allow you to live fully despite them. Whether it is a hearing aid, or a mobility scooter, or a power wheelchair, I hope you will not let shame and ableism cheat you out of living your fullest life.

God created each of us b’tzelem Elohim (in the image of the Holy One). No matter what is going on with our bodies, each of us contains that Divine spark, and we have a right to live fully and with dignity. May the day come soon when all feel free to ask for and get whatever they need to live a life of Torah, of freedom, and of dignity.

February is Jewish Disability Awareness, Acceptance, and Inclusion Month (JDAIM), a unified initiative to raise disability awareness and support efforts to foster inclusion in Jewish communities worldwide. The Union for Reform Judaism is proud of its Presidential Initiative on Disabilities Inclusion, an ongoing effort to ensure full inclusion and participation of people with disabilities in every area and in every aspect of Reform Jewish life. Visit the Disabilities Inclusion Learning Center to learn more.