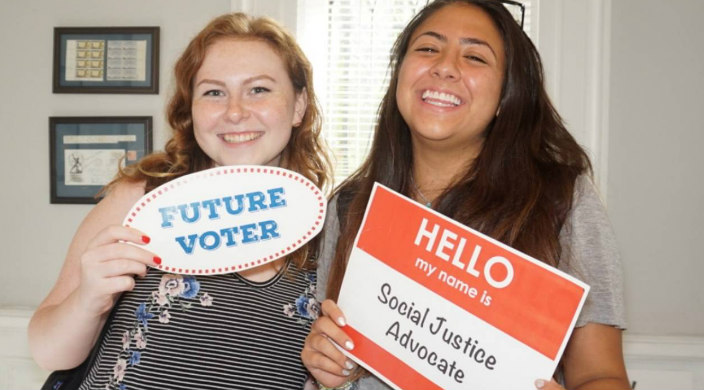 As a child, my father and I went go to St. Pius Church every Election Day, and I helped fill out his ballot. My dad took out his driver’s license, and I informed the woman in charge of the polling station that he was “Michael Becker on Galloping Hill Road.”

With that hurdle cleared, we proceeded to the voting booth, where he closed the curtain, held me up, and told me which handle to pull on the old dimple ballot machines, which made a satisfying click-clack noise. After turning in the ballot, I proudly affixed his “I voted” sticker on my forehead.

As I grew older, I became more of an active participant in our democracy, having learned the importance of civic engagement from my father, and through the Religious Action Center of Reform Judaism and NFTY – The Reform Jewish Youth Movement.

In high school, I created a non-partisan flyer explaining the ballot initiatives in my home state of Connecticut. The flyer explained what “yes” and “no” votes would mean on measures that even some engaged voters were not familiar with, and I stood in the freezing rain for four hours handing out these sheets of paper outside the polling place.

I ended up meeting State Rep. Laura Devlin and State Sen. Tony Hwang, who were both shocked to see someone who was too young to vote helping educate those who could. I told them what I still believe: that no one should fill out a ballot blind. The point of an election is to accurately represent the people’s voice, and voters need proper information to make sure that happens.

Since then, I’ve worked on voting drives, helped people in my dorm and sorority get absentee ballots, and I’ve mobilized my college community around elections.

Last November, I voted in my first election. I remember the excitement when I opened my mailbox to find an absentee ballot and sat down in my dorm room with a black ink pen in one hand and a candidate information sheet in the other. Then I walked two miles – again, in a freezing downpour – to buy stamps and mail it to my election board back home.

Civic engagement, with voting at its center, is essential to our Reform Jewish values. Our sacred texts teach us that every voice in the community must be heard when it comes to making important decisions:

“For any community matter on which they cannot find common ground, they should convene all taxpayers, and they should agree that each will voice [their] view altruistically, and they will follow the majority,” Shulchan Aruch, Choshen Mishpat 163:1

The lesson here is that when a community has a disagreement, it should be resolved by a majority vote – a core tenet of modern democracies.

Our texts also teach that showing up and taking action is the best way to have an impact. Casting your ballot will have a huge impact on this year’s crucial election. But as Jews pursuing justice, we can go further by helping to make sure that everyone in our communities has the ability – and makes the decision – to vote.

Grounded in these Jewish values, the Reform Jewish community is working to mobilize hundreds of thousands of Reform Jews across the United States to make sure that every voice is heard and that every vote counts in November. Join me and other Reform Jewish leaders for Every Voice, Every Vote: The Reform Movement’s 2020 Civic Engagement Campaign, aimed at helping our community reach 100 percent voter turnout and work to fight voter suppression.

The 2020 general election will have an impact well beyond the next two or four years. Not only will each state vote on far more than the presidential race – with other national, state, and local offices and ballot measures – but the people who are elected will make decisions with long-lasting impact. The most important thing you can do before voting is educate by reading up on each candidate and ballot measure.

If you cannot vote, educate your family and friends about your state’s ballot to help them make an informed decision. To find out more about what will be on your ballot, visit vote411.org.

I’m asking you to make a promise to me, to those who cannot vote, to your friends, to your family, to your Jewish community, and most importantly to yourself: “I will vote in the 2020 elections. I will register others to vote. I will have an impact on these elections.”

Hold yourself accountable for 2020. We cannot stand idly by in a time when our voices must be heard and when history will be made.

Get involved now in Every Voice, Every Vote: The Reform Movement’s 2020 Civic Engagement Campaign. 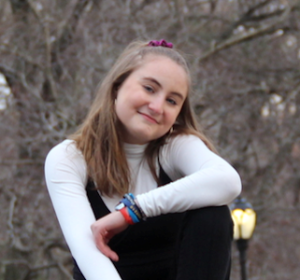 Jessica Becker is the 2019-2020 social action vice president of NFTY - The Reform Jewish Youth Movement. She is from Fairfield, Connecticut and loves to root for bad New York sports teams (Mets, Giants, Knicks, and Rangers). As an alum of URJ Kutz Camp and the Religious Action Center’s L’Taken Social Justice Seminar, she is eternally grateful for the opportunities the Reform Movement gives to teens to make a positive change in the world. Jessica is studying political science on the pre-law track at The University of Vermont.

END_OF_DOCUMENT_TOKEN_TO_BE_REPLACED

Judaism encourages us to awaken each day with thoughts of gratitude. I recite the Modeh Ani each day to thank the Divine for returning my soul. I was recently asked where our soul goes while we sleep. This poem is my response.
Education
Image