How and Why We Must Advocate for a Just Immigration System 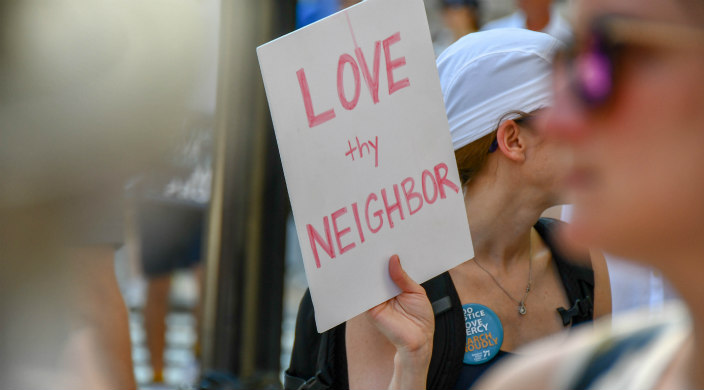 Reports indicate that this weekend, ICE will snatch untold numbers of people from their homes, their workplaces, and their houses of worship. They will be held in detention, and eventually, face deportation. Families will be torn apart, children will be left without parents, and households will be stripped of their breadwinners. We cannot be silent in the face of these injustices.

The mass raids planned by the Trump administration are heartbreaking, heartless, immoral and simply bad public policy. They are also yet another element of the administration’s inhumane immigration policies overall that have deliberately caused chaos, fear, overcrowding and squalid conditions in detention centers (according to, among other sources, the administration’s own Department of Homeland Security), and immense pain and suffering for immigrants and immigrant communities.

Some have sought to try and understand this terrible reality by comparing it to other humanitarian tragedies. The American internment of Japanese citizens during World War II is often invoked as a cautionary tale of a national policy that was unequivocally wrong. It continues to cause pain and trauma in the Japanese American community seven decades later. The Holocaust is also invoked, with its images of Jews and other Nazi victims dehumanized, rounded up, shipped in cattle cars, held in concentration camps behind barbed wire, and murdered.

I understand and empathize with the desire to find language that adequately conveys our moral outrage. Each of us has our own view on the appropriateness of such analogies. There are lessons to be learned from the Holocaust and specifically the failure of too many to act early on. At the same time, I believe that to equate every evil with the Holocaust is to demean the victims of genocide and to trivialize and deny the distinctive nature of that particular atrocity – the effort, as a matter of state policy, to eradicate the Jewish people from the face of the earth. Others may disagree.

Where we must agree is on the imperative to save our greatest moral outrage for the current dehumanizing policy that endangers the lives of children who are crossing the U.S. border with their families. Sadly, too many politicians who endorse these cruel practices also profess deep religious commitments. What the Bible tells us unequivocally is that God is offended by inhumane treatment of others. And God demands special care for the vulnerable, for the stranger and for the children. As Exodus 3:9 teaches: “The cry of the Children of Israel reached the Holy One…”

Here’s what I know for certain: the way the United States government is treating asylum-seeking children and adults is a moral affront to the values upon which this great country was founded. The inhumane conditions in which infants and children are being held – in overcrowded cage-like facilities, without diapers, forced to sleep on concrete floors, and to go without soap or showers for weeks – brings shame on our nation at a time when we, a nation of immigrants, should instead be celebrating the ideals of freedom. The planned mass raids in immigrant communities are likewise shameful.

What is our task, then, amidst our moral outrage? It is our role to advocate tirelessly for a just immigration system and to help bring about real and lasting change.

Our Reform Jewish community is making deep, strategic organizing and advocacy possible within and across Jewish communities. We are working to end child detention, reunite families, and protect DREAMers, TPS holders, asylum seekers, and others. You can have the greatest impact in these endeavors by acting in your local community:

Above all, join me in taking action today: Here are five ways to help undocumented immigrants and ways you can help end child detention now. Together, we can end the inhumane treatment of migrants in our country.

Learn more by visiting the Religious Action Center of Reform Judaism's Gilbert and Eleanor Kraus Initiative Immigrant and Refugee Justice Action Center, where you'll find the most up-to-date information about the Reform Jewish community's work on immigration and refugee issues.