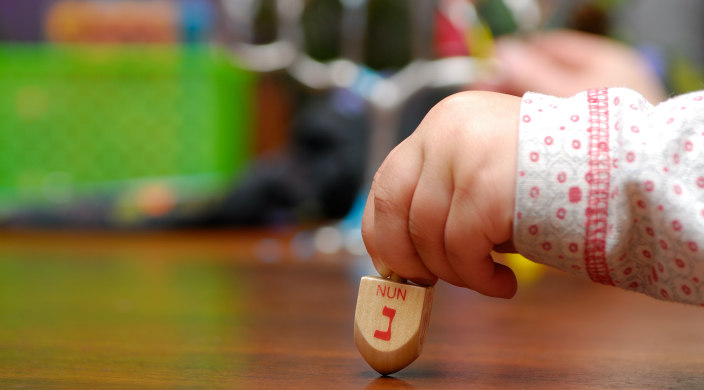 Early on, helping our young daughter Michal to experience her Jewishness was surprisingly easy. As a sociologist, but especially as a mom, I marveled at the many clever traditions that serve to perpetuate Judaism across generations: the hypnotic glow of Shabbat candles, the snappy holiday melodies, afikomanafikomanאֲפִיקוֹמָן"Dessert" (Greek); matzah is the official "dessert" of the Passover seder meal. During the seder, the children traditionally "steal"and hide the afikoman, and it must be redeemed by the seder leader. -hunting on Pesach, dressing up in silly Purim costumes, and the delicious taste of our weekly challah.

Propped up on the couch the first Shabbat she could chew on a hunk of challah, Michal gobbled up as much of it as she could. “Hey,” I thought, “maybe this religious upbringing stuff isn’t going to be as hard as I imagined.”

Michal’s religious upbringing became a little tougher as her social world expanded. For example, when she was around 3 years old, we stopped for a red light. Suddenly a man in a Santa suit promoting a nearby Christmas tree lot drove up alongside us and began serenading Michal with “Santa Claus Is Coming to Town.” Michal was delighted, but my reaction was mixed: It was fun to see Michal’s glee, and I wanted our family to live in a multifaceted, multicultural world – but I didn’t want my girl bonding with Santa Claus!

Once Michal started school, there was the annual challenge of Christmas trees in classrooms as well as the inevitable holiday decorations and parties, an overlap of religious and secular life that her dad and I found objectionable.

At first, I had to force myself to speak up: “Maybe you could, uh, just talk about, um... general stuff, ” I’d meekly suggest, “like winter or the upcoming new year...?” The response I got was usually some variation of:

“The kids love Christmas, so we can’t just ignore it.”

“A Christmas tree is a cultural, not a religious, object, anyway.”

“Don’t worry: We’re teaching them about Hanukkah, too!”

The kids did love the sights, sounds, and smells of Christmas, but I suspected the teachers loved them even more. After all, the holiday came with ready-made songs, activities, and bulletin board ideas that filled up an entire month’s curriculum.

We weren’t looking for equal time or for placing a hanukkiyah next to the decorated tree. In fact, I was troubled by the friendly ecumenism, admittedly born of goodwill, that teachers, administrators, and parents generally seemed to advocate:

“We’re all the same as people, ” they said or implied. “We can all share everyone ’s beliefs. We can all celebrate everyone’s holidays!” But their cheerful universalism ignored significant religious distinctions and dismissed Judaism’s unique value.

Not only that, my husband and I believe it is not the business of public school teachers to conduct Michal’s religious education. That was the responsibility of her family and synagogue.

Accepting that I was unlikely to prevent holiday activities, I eventually switched from “debate mode” to nurturing engaging in mutually teachable moments. One year, for instance, a school director explained to me that anything outside of church (or synagogue, she assumed) was not really “religious.” I responded by describing the many Jewish holidays celebrated at home that are central to Judaism.

In time, such encounters became annual Hanukkah rituals in of themselves, just as predictable as spinning the dreidel and frying latkes. And it gradually dawned on me that these experiences perfectly echo the theme of Hanukkah. After all, the threats of assimilation and secularization are at the heart of the holiday story – the refusal of Judah Maccabee and his band of warriors to prevent Judaism from being eclipsed by the dominant culture.

What, then, could be a more fitting commemoration of Hanukkah than promoting dialogue about the value of respecting the boundary between religious practice and public life?

My conversations about keeping religion out of the classroom are one individual’s efforts to keep Judaism from being absorbed into a secularized melting pot. In this way, every year, in our wonderfully pluralistic communities, moms and dads, grandpas and grandmas, and kids themselves each get a chance to be like Judah Maccabee.

True, our actions may be far less dramatic than the Maccabean revolt. But when we take action to preserve our heritage, our lives become part of the ongoing Hanukkah story.

Judith Richlin-Klonsky is a sociologist and member of Congregation Shomrei Torah in Santa Rosa, CA. This essay originally appeared in the Winter 2010 issue of Reform Judaism magazine.

I'm a self-proclaimed book worm. Since I could read, my default setting has been to research anything new at the library before implementing it. However, adulthood has taught me that some of the best lessons are learned after acting and truly living, which is why Rabbi Yanklowitz's perspective so resonates with me. Even so, I always start new adventures by studying.
Ten Minutes of Torah
Image 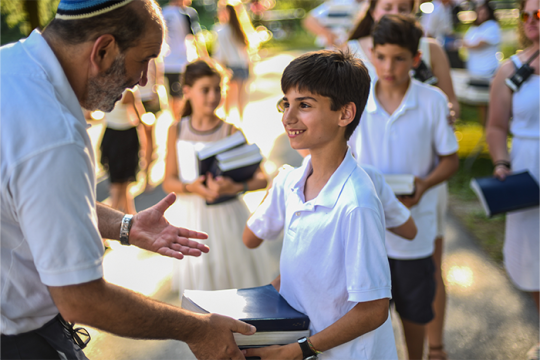